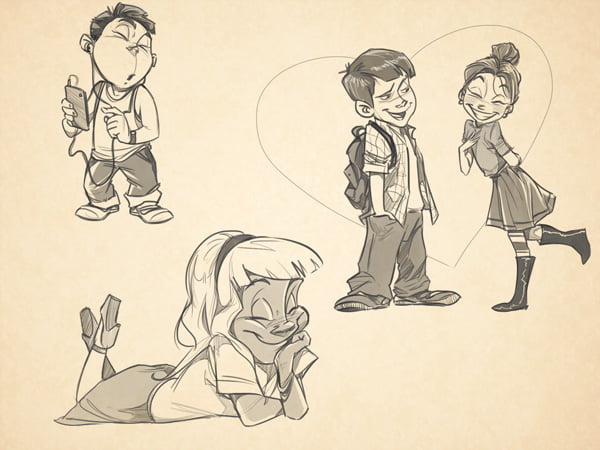 Drawing Cartoon Children Using Correct Proportions: When drawing cartoon children, rather than adults, the big differentiator is the proportion of the body to head size ratios. Ok, when drawing real life you need to get these ratios close on, but when drawing cartoons you can exaggerate the differences so the viewer really ‘gets it’.

This may sound a bit difficult if you are not familiar with the standard proportions of the human body – and that’s true of most budding cartoonists. So, to start with, it helps to understand what the ratios are, and then learn them so that you can apply an appropriate amount of exaggeration to suit your drawing objective. In this article I’ll describe how to measure the proportions and what the different values are for the range of people from babies of one-year-old through to full adult.

The ratio measurement starts from the size of the head. That is the distance from the top of the skull to the bottom of the chin with the head held level. This is your basic measurement of a ‘head’.

Remember that these are all approximations. We all have seen people with what are called ‘long faces’ whose heads seem too long for their bodies. Sometimes you see the opposite, someone with a small head for their size and age, though that is rarer. So what follows describes the average situation.

Also, because you are cartooning, you have greater freedom to exaggerate; I’ll come back to this later.

So, starting from our ‘head’ size a fully grown adult will be eight heads tall. That dimension, as for all the ones that follow, includes the character’s real head!

For a baby the figure is quite different. The figure is around four heads tall overall. Babies are born with heads that are larger about their bodies. That’s because brains grow much less compared to the body as a child grows from a baby to an adult. So, the ratio is an indicator of an observer of the child’s age. The closer to the ration of 8:1 then the closer to an adult will be assumed by your viewer.

The following list gives you the realistic proportions for a child as it grows into an adult.

The baby of 1 year of age – Four heads

For ages in between just make an estimate based on these landmark figures.

When you are drawing cartoons it helps to exaggerate these differences. So it is quite common and acceptable for a cartoon baby to have an overall height of 2½ ‘heads’ rather than the official ration of 4. This is quite acceptable as it is the head and face that are normally the more important elements of your cartoon.

Making the cartoon children’s heads larger in proportion to the body allows facial expressions to be drawn more clearly and the larger size draws the viewer’s attention to those key expressions that can make or break your cartoon. 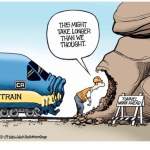 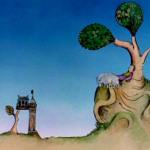