The American newspaper cartoonist Herbert Block (born 1909), better known as Herblock, was concerned with civil liberties and the attacks on them by demagogues and dishonest politicians. 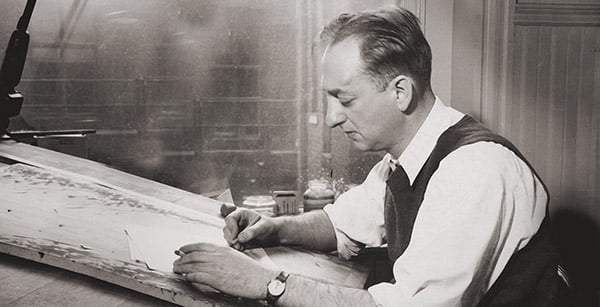 Herbert Block was born on October 13, 1909, in Chicago, Illinois. His pen name, Herblock, was suggested to him by his father David Julian, a chemist. His brother William, who was his earliest mentor and also active in journalism, induced him to enter that field.

Block’s first books were dedicated to “Bill …, one of the best reporters in Chicago’s newspaper history.” His mother was Tessie, née Lupe. Endowed with a natural gift for drawing, he perfected it by attending the Chicago Art Institute part-time; he also obtained a good general education at nearby Lake Forest College (1927-1929). 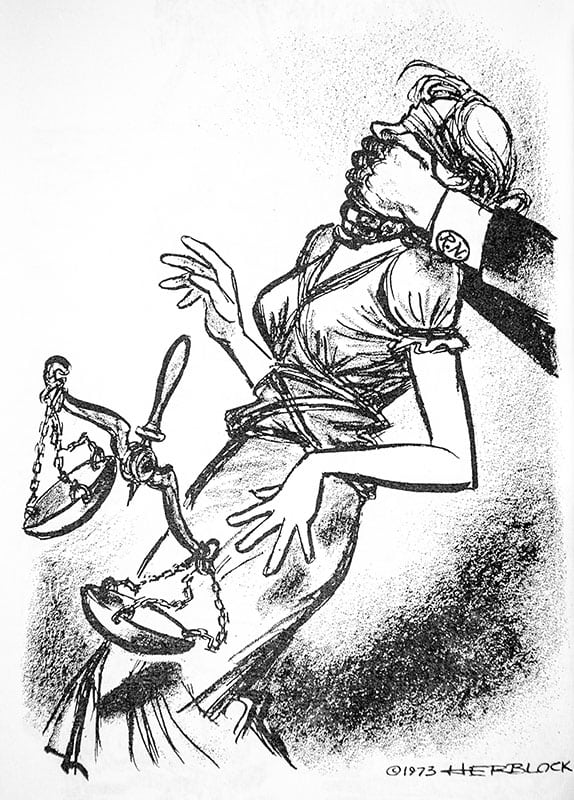 When only 19 Herblock began his career as a journalist with the position of an editorial cartoonist on the Chicago Daily News (1929-1933). He then moved to the Newspaper Enterprise Association (NEA) in Cleveland, Ohio, where his personal opinions, as always, guided his drawings toward a definite idea, which disturbed some of the management. As he explained, the NEA grew “really jittery about my cartoons because they were afraid that if a client canceled the cartoon they’d cancel the whole service. So it got to be a tussle at NEA.”

The job ended when he joined the Army Information and Education Division (1943-1945), where he rose to the rank of sergeant. After discharge, he accepted the job of an editorial cartoonist on the Washington Post, where he found editorial views compatible with his own and management that did not become “jittery.”

His cartoons were distributed by the Hall Syndicate and in the early 1950s appeared in 200 periodicals from Washington to Bangkok, including the Manchester Guardian and the Economist (London).

Herblock’s cartoons were expressions of his concern for the human condition. He was a tireless searcher for truth and for the documents required to discover it. His cartoons were generally a product of this search. As he stated, “I’ve often summed up the essential role of the political cartoonist as being that of the kid in the Hans Christian Anderson story who says, ‘The emperor has no clothes on.”‘

The truth emerged as Block saw it. He told Time, “My cartoons are opinion pieces and are recognized as such.” Lowell Mellet, reviewing his work in the New Republic, observed that Herblock “sees things in a way that never would occur to anybody else…. He is truly a great cartoonist. He makes some people laugh. He makes some people swear. He makes everybody think.” 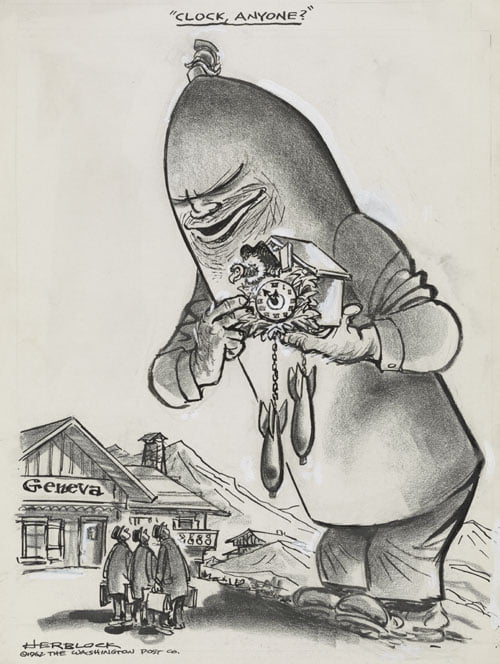 In this light, understandably, he produced many cartoons that attacked governmental policies intended to keep documents hidden from public scrutiny. It is important to remember that Herblock was still in the early years of his career when the Cold War broke out in the late 1940s and during its most tense phase in the 1950s.

In his view, far too many lower and medium level bureaucrats exercised their power to classify documents. Worse, they acted irresponsibly and capriciously, locking away information that had nothing to do with national security. They intended, rather, to remove from view data that would reveal wrong-doing and downright dishonesty in government.

Numerous cartoons displayed the hostility of bureaucrats toward scientists, intellectuals, and even fellow civil servants who dared to raise their voices against the system. Careers of truly patriotic persons were ruined during this period. 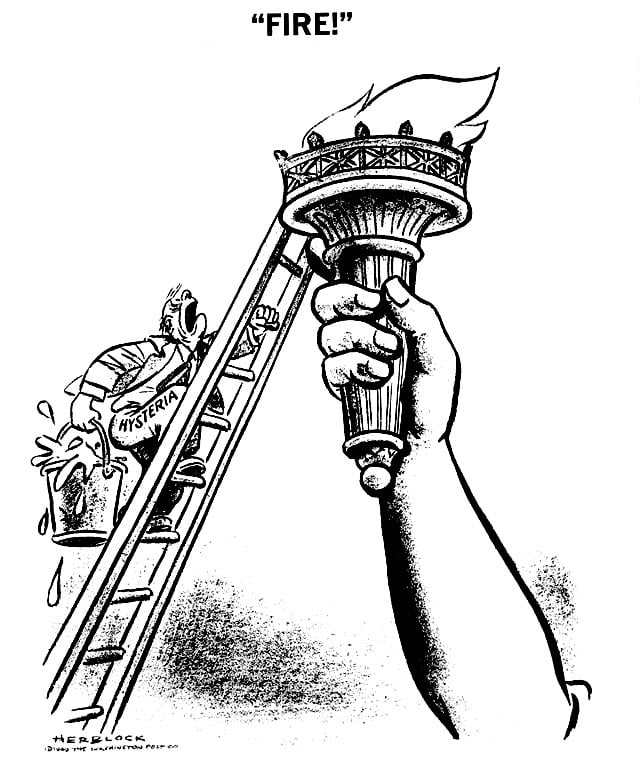 It was the parading of false patriotism that particularly aroused him. He attained the height of his critical powers during the years when Joseph McCarthy was rampantly accusing persons in and out of the government of communist sympathies or, worse, of being agents of the Soviet Union.

To symbolize this dishonesty, Block displayed Senator McCarthy as an unshaven mud-slinger, smearing innocent people with unproven accusations dragged up from the sewer or garbage cans. He was convinced that the Federal Bureau of Investigation was involved in these violations of civil rights and wrote, “If the last refuge of a scoundrel is patriotism, apparently the final inner sanctum of that refuge, for those who have made a racket of anti-communism, is the FBI.”

He was equally convinced that McCarthy personified a dangerous current of the times, enjoying wide support. “No demagogue,” he wrote, “is an island of mud unto himself.” 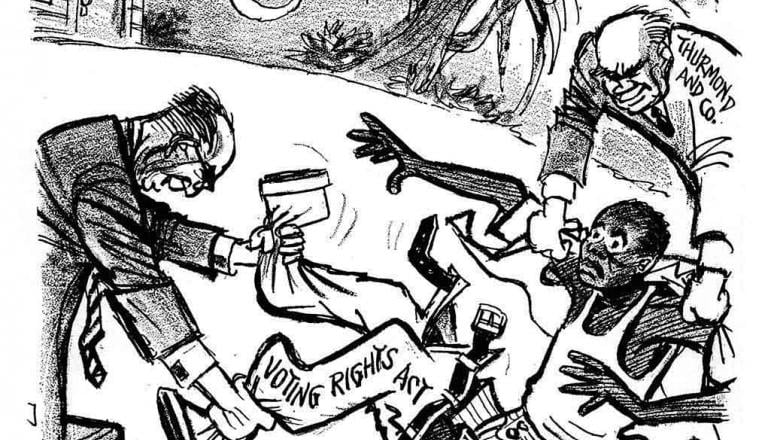 From the later 1950s, Richard Nixon became the chief villain. To journalists and politicians who showed the only complacency to Nixon, and who excused him by trying to hold to middle-of-the-road politics, he affirmed, “I don’t know what’s so fascinating about the ‘middle of the road,’ but for a lot of people this position has the kind of magnetic attraction that a coffee cup has for cigarette ashes; and it’s regarded as the ideal place to dump any kind of decision…. In a choice between right or wrong, I think something better than a middle-of-the-road policy is needed.”

President Eisenhower held that position, and in Block’s cartoons, he is consistently depicted as a weak, ineffective politician, the unwitting partner of Richard Nixon. The cartoonist brought to light dishonest deals carried on by Nixon long before the Watergate scandal. 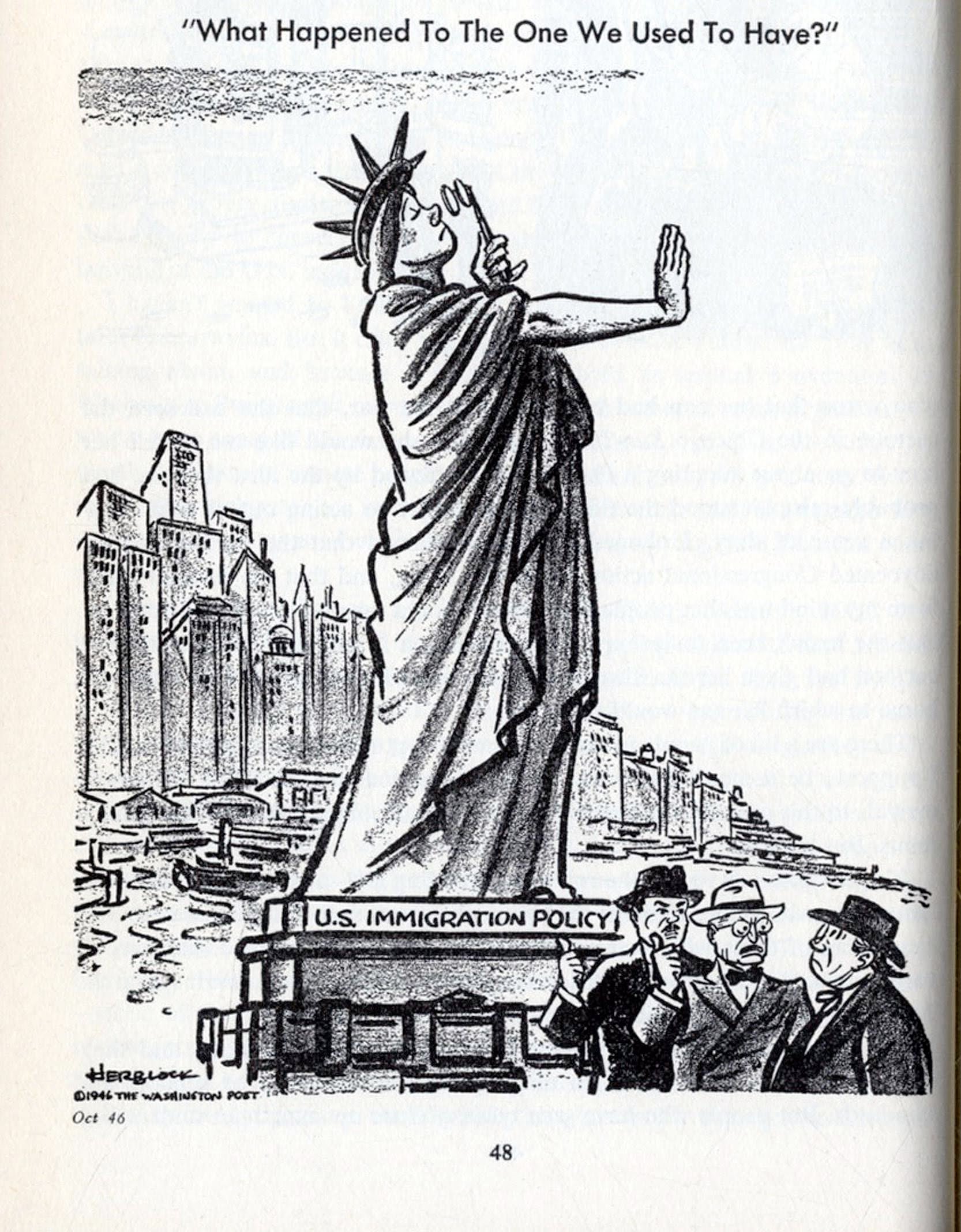 Block’s books reproduced his cartoons and their captions and provide a more extensive commentary on his times. They put his cartoons in their historical setting. He sometimes wondered whether, given the menace of the atomic bomb, there would be any historians in the future— even any future. If there are, they will find in these works an invaluable commentary on Block’s times.