Evidence suggests the children’s book author modeled the Lorax after the mustachioed patas monkey he observed while in Africa.

More than a decade after he’d dreamt up iconic characters like a hat-wearing cat and a grumpy Grinch who stole Christmas, Dr. Seuss introduced the world to the Lorax. “Describe him…That’s hard. I don’t know if I can,” wrote Seuss (aka Theodor Geisel) in his 1971 children’s book. “He was shortish and oldish, and brownish and mossy. And he spoke with a voice that was sharpish and bossy.” The Lorax was the vocal defender of the Truffula trees that the Once-ler greedily chopped down en masse to knit thneeds from their bright-colored tufts.

That was until all the trees were gone. After the Once-ler — despite the Lorax’s incessant pleading — eventually uprooted all of the Truffula trees, thus destroying the entire ecosystem, the “sort of man” Lorax disappeared, leaving behind only the word “UNLESS” in a small pile of rocks. The moral of the cautionary tale, in Seuss’s words: “UNLESS someone like you cares a whole awful lot, nothing is going to get better. It’s not.”

For a writer who achieved notoriety by skillfully weaving his whimsical rhymes in imaginary worlds, Seuss rooted the seeming make-believe Lorax very much in reality. Thinly veiled environmental metaphor aside, The Lorax, which sold more than a million copies and has been adapted into more than a dozen languages, may have drawn a more surprising element from nature, too. In a July 2018 study published in the Nature Ecology & Evolution journal, scientists hypothesized that, unlike many of his other famous fictional creations, Seuss might have modeled the Lorax himself after the very real mustachioed patas monkey that he likely encountered during a 1970 vacation to KenyaKenya.

Published just more than a year after Earth Day was first celebrated in the United States on April 22, 1970, The Lorax also tackled the theme of deforestation in tandem with that author fighting his own battle to keep a suburban development project from clearing the Eucalyptus trees around his La Jolla, California, home. He had hoped to open a children’s book “that would support the so-called environmental protection movement,” but, according to Seuss biographer and Dartmouth College American literature professor Donald Pease, the famed author had feared that all of his previous efforts sounded too “preachy.”

Plagued by writer’s block, Seuss took the suggestion of his second wife, Audrey Geisel, to travel to actor William Holden’s exclusive Mount Kenya Safari Club in Africa to clear his mind. In September 1970, the couple visited the lavish resort where guests could observe some of the country’s most endangered species along the Laikipia plateau. It was here that “the story came to him,” Pease explained, and Seuss wrote most of the manuscript for The Lorax in a single afternoon. 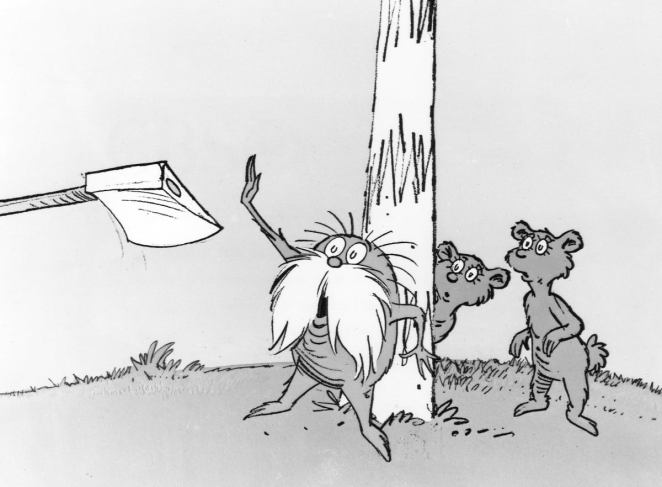 There are striking similarities between the Lorax and the patas monkey

Before the Nature Ecology & Evolution study’s publication, its lead author Nathaniel Dominy, a professor of anthropology and primate biology at Dartmouth, said he’d previously joked with colleagues that if Seuss were to create a primate, “it would turn out something like the patas monkey.” At the time, he was unaware of the Geisel’s’ vacation to the homeland of the primate, which the article described as having a dark mouth, hooded eyes, and wispy Confucian whiskers. Even the Lorax’s “sawdusty sneeze,” they guess, very well could have been Seuss’ quirky reinterpretation of the patas monkey’s wheezy whoop.

What’s more, similar to The Lorax’s mythical Truffula trees, a species of spiked, spindly African tree called the whistling thorn acacia, is also paramount to patas monkeys’ survival. The acacia’s gum, thorns, flowers, and seeds are believed to make up around 80 percent of the primate’s diet. “It’s a tree Dr. Seuss could not have missed when he was wandering through the Safari Club,” Pease wrote. “Though patas monkeys are terrestrial, spending much of their time clambering through the reedy savannah grasses, they never stray far from their acacias.”

As part of the scientific study, Dominy also collaborated with primate biologist James Higham and his Ph.D. student Sandra Winters, who used facial recognition software to compare the face of the illustrated Lorax with that of the African patas monkey. After comparing the two, Higham and Winters concluded that the similarities were, perhaps not coincidentally, significant. The article’s co-authors further contended that the anger Seuss’ Lorax exhibited would have likely been antithetical to the author’s intended message, had he not been part of the fictional ecosystem himself, much like the monkeys.

Seuss never confirmed the true inspiration behind the book

Despite all the evidence presented, there may never be a definitive confirmation of whether or not the patas monkey was, indeed, the inspiration for the Lorax character, however. Seuss died in 1991, and his widow’s memory of their 1970 trip to Kenya has been described as foggy at best. Either way, The Lorax, which the logging industry even unsuccessfully attempted to ban in the 1980s, has a message and legacy that has extended long past its initial publication.

“We’ll never know for certain the inspiration of this cautionary tale, but it doesn’t matter,” Dominy opined in his journal article. “Ecosystems are communities, they’re assemblages of species that are interacting, and if you affect one, you affect all of them. That’s what’s important, and he nailed that beautifully.” 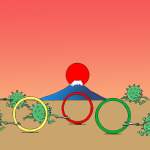 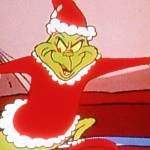