Playwright, cartoonist, and author/illustrator. Assistant to cartoonist Will Eisner, 1946-51; drew syndicated cartoon series “Clifford,” 1949-51; held various art jobs, 1953-56, including making slide films, as a writer for Terrytoons, and as a designer of booklets for an art film; freelance cartoonist, with work published in Village Voice, New York, NY, 1956-97, in Observer, London, England, 1958-66, 1972-2000, and in Playboy,1959–; cartoons syndicated by Publishers-Hall Syndicate and distributed to more than one hundred newspapers in the United States and abroad, 1956-2000. 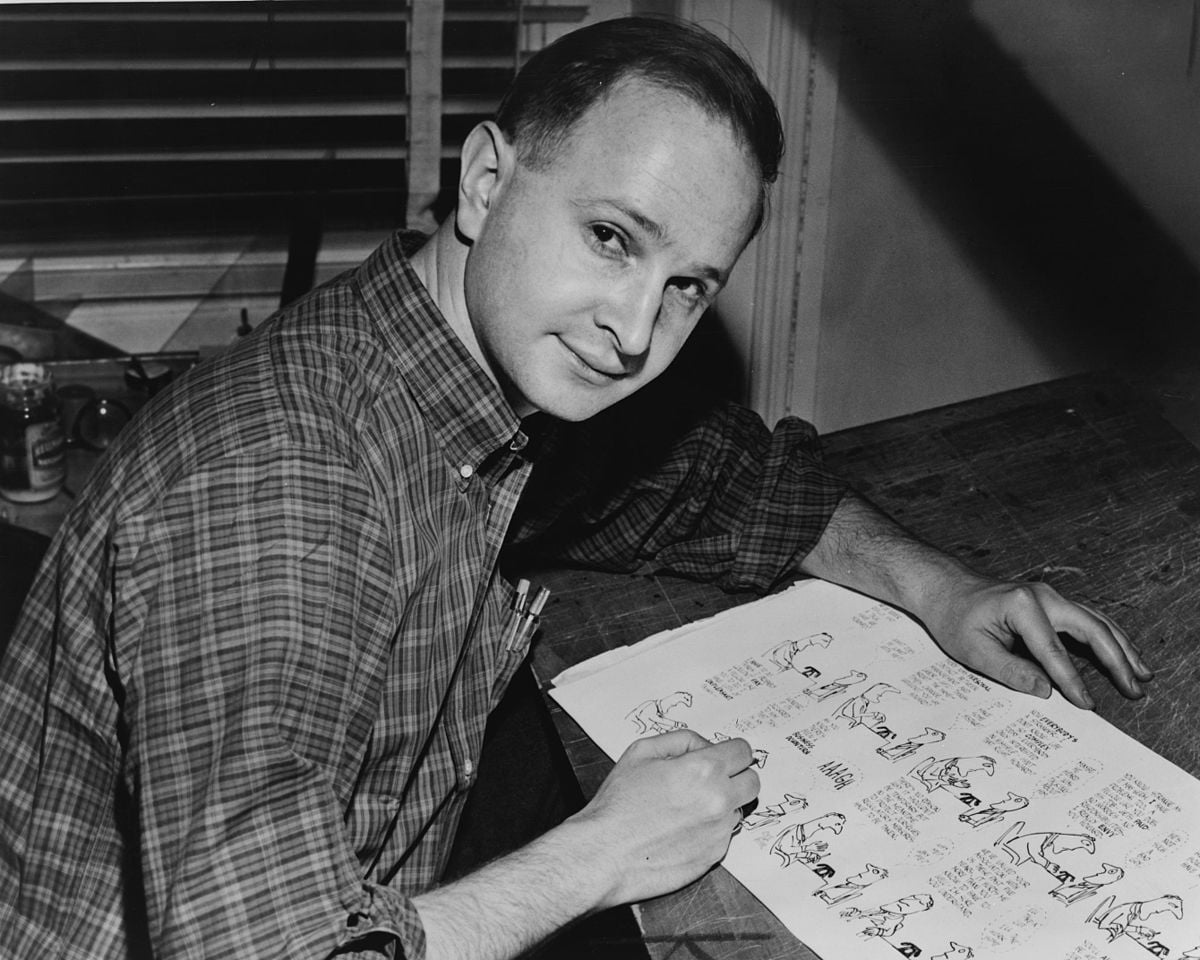 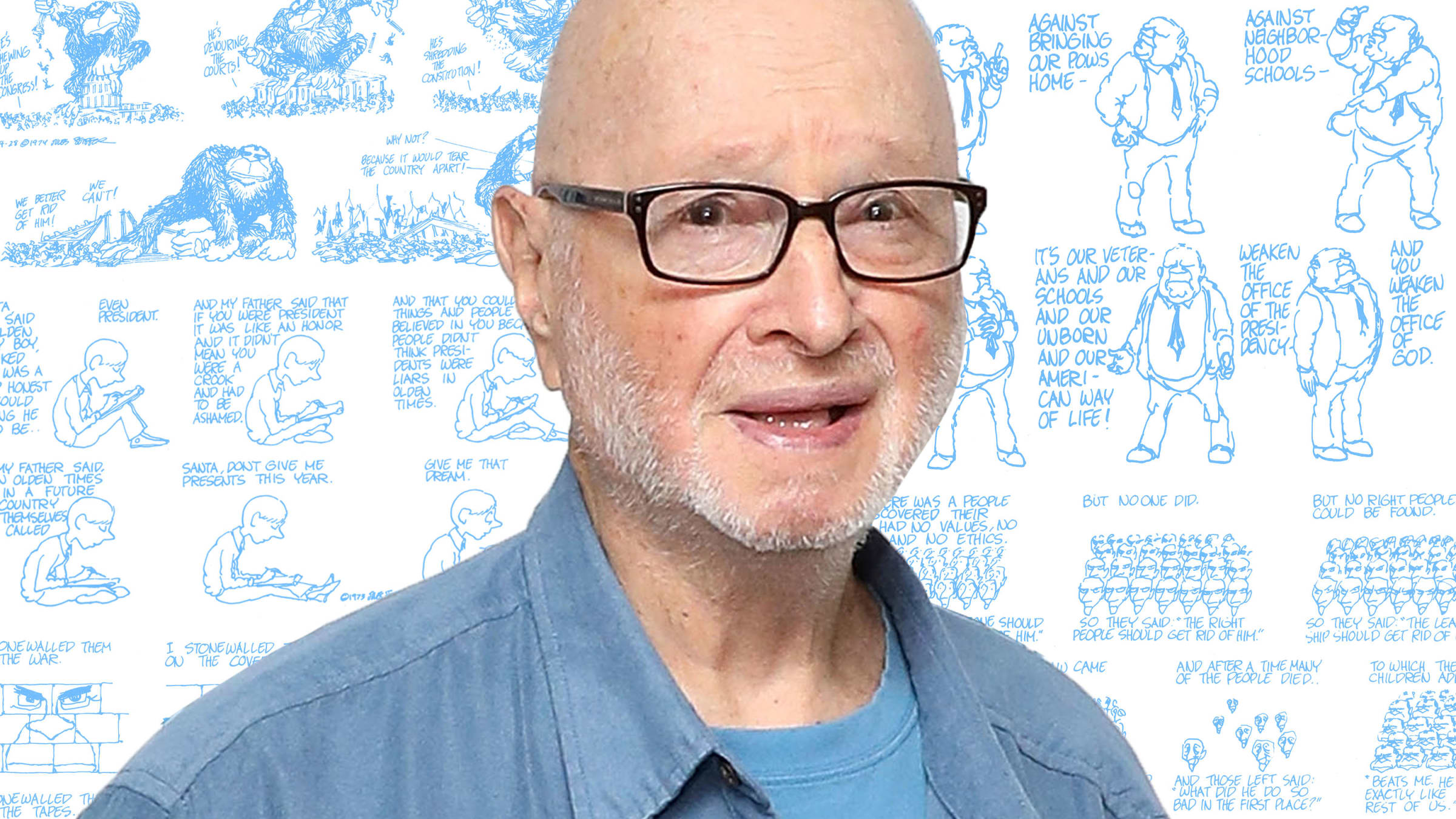 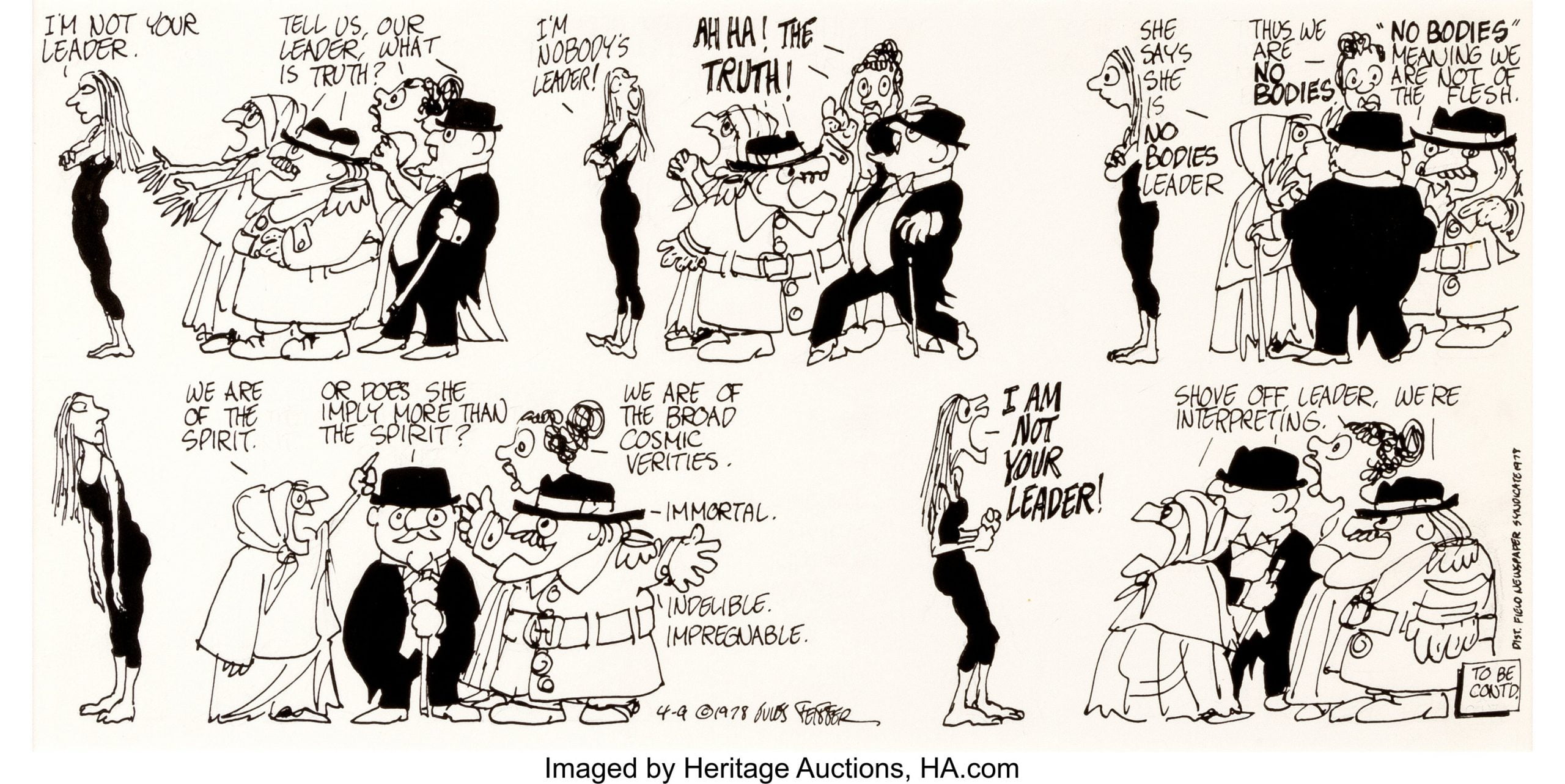 FOR ADULTS; CARTOONS, UNLESS OTHERWISE NOTED

Pictures at a Prosecution: Drawings and Text from the Chicago Conspiracy Trial, Grove (New York, NY), 1971.

Marriage Is an Invasion of Privacy, and Other Dangerous Views, Andrews & McMeel (Kansas City, MO), 1984.

Ghost-scripted comic-book series “The Spirit,” 1949-51. Contributor to periodicals, including Ramparts.

Feiffer’s books have been translated into German, Swedish, Italian, Dutch, French, and Japanese.

The World of Jules Feiffer, first produced in New Jersey, 1962. 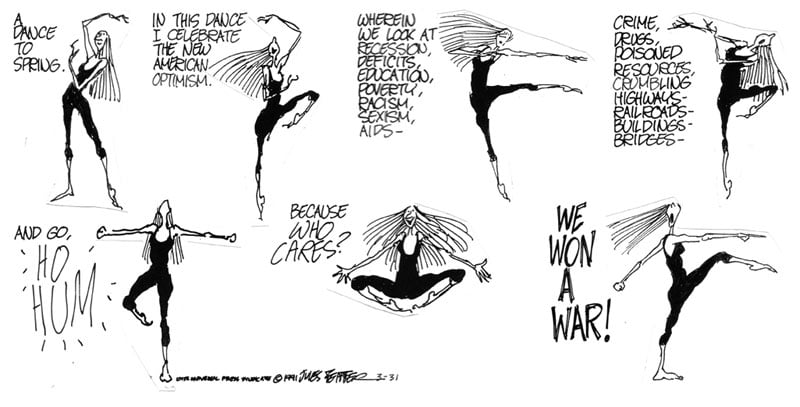 (With others) The Watergate Classics, first produced at Yale Repertory Theatre, 1973. 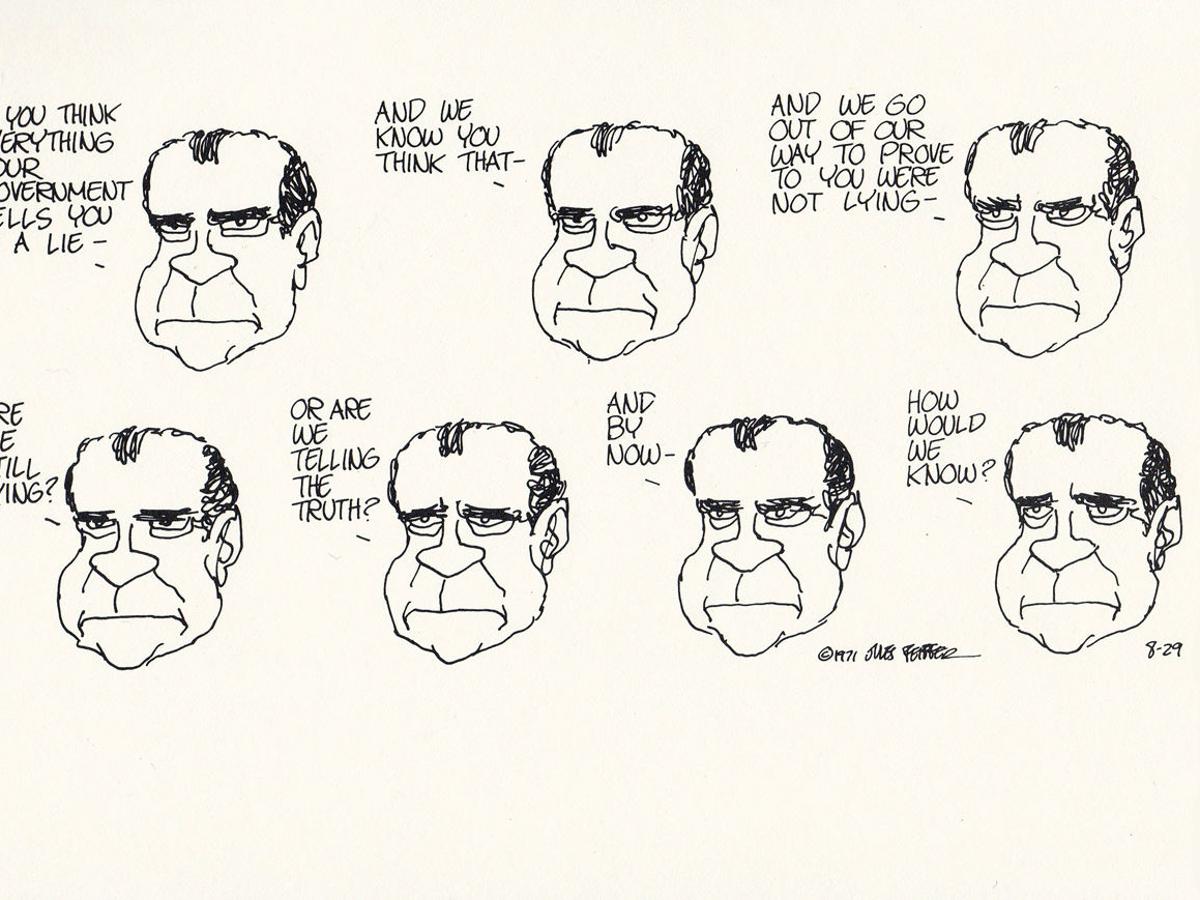 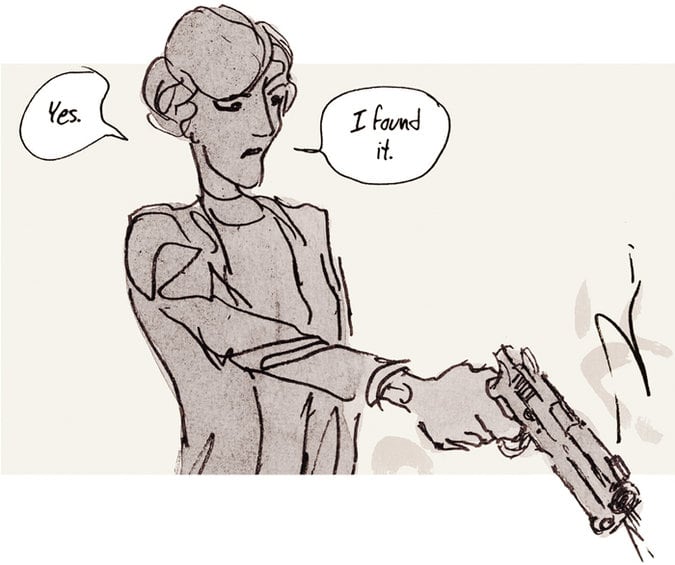 Decades before he published his first self-illustrated children’s book in 1993, Pulitzer Prize-winning cartoonist Jules Feiffer was well known to young readers as the illustrator of Norman Juster’s classic 1961 novel The Phantom Tollbooth.

During the intervening years, he was known to adult readers as the creator of satiric cartoons published in hundreds of newspapers, while his plays have appeared on numerous stages and several, with the artist/playwright’s screenplays, have been adapted for film. In the early 1990s Feiffer came full circle, beginning a new phase of his career as a children’s book author, and with books such as By the Side of the Road and The House Across the Street, has won new fans through his sketchy pen-and-ink drawings and quirky texts.

Born in the Bronx, New York, in 1929, Feiffer was the son of a Polish mother and a father whose unsuccessful business ventures caused money worries to haunt the Feiffer household. The trials of the Great Depression did not help matters in the Feiffer home, and young Jules reacted by escaping into books—more specifically comic books such as “Detective Comics”—and drawing. When Feiffer was approximately seven years of age, he won a gold medal in an art contest sponsored by a New York department store.

Knowing that a good job would help him avoid the financial plight of his parents, he decided to become a cartoonist. As Feiffer recalled in The Great Comic Book Heroes: “I . . . drew sixty-four pages in two days, sometimes one day stapled the product together, and took it out on the street where kids my age sat behind orange crates selling and trading comic books. Mine went for less because they weren’t real.”

Feiffer studied the comic strips in the pages of the New York Times and the World-Telegram his father brought home after work, salvaged newspapers from garbage cans, and got friends to bring him the comics sections from the newspapers their parents discarded. “To see ‘Terry and the Pirates,'” Feiffer explained, “we’d have to get the Daily News, which my family wouldn’t allow in the house.” The reason: his parents–both Jewish and both Democrats–believed that the publisher of the New York Daily News was anti-Semitic.

At age fifteen Feiffer enrolled at the Art Students’ League, then studied at the Pratt Institute for a year, taking night courses. Meanwhile, in 1946, through a stroke of luck, he became an assistant to noted cartoonist Will Eisner. “He said I was worth absolutely nothing, but if I wanted to hang out there, and erase pages or do gofer work, that was fine,”

Feiffer recalled to Gary Groth in Comics Journal. Eisner eventually assigned Feiffer the writing and layout for the comic strip “The Spirit,” and in exchange let his young apprentice cartoonist have space on the last page of his current strip. Thus, the “Clifford” comic strip was born.

“Clifford” came to a close in 1951, when Feiffer was drafted into the U.S. Army during the Korean War. His experiences as part of the military provided Feiffer with the subject he would satirize for most of his remaining career: the workings of the U.S. government. “It was the first time I was truly away from home for a long period,”

Feiffer explained to Groth, “and thrown into a world that was antagonistic to everything I believed in, on every conceivable level. In a war that I was out of sympathy with, and in an army that I despised; [an army that] displayed every rule of illogic and contempt for the individual and mindless exercise of power. [That] became my material.”

Released from duty in 1953, Feiffer was at work creating a weekly comic strip for the Village Voice by 1956. “We cut a stiff deal,” the cartoonist recalled to a writer for Dramatists Guild Quarterly of his early attempt to get published. “They would publish anything I wrote and drew as long as I didn’t ask to be paid.” As he planned, Feiffer got a call from an editor at a different publication, who, as the cartoonist recalled, “said, ‘oh boy, this guy is good, he’s in the Voice, ‘ and accepted the same stuff his company had turned down when I had come to their offices as an unpublished cartoonist.”

With the security of regular cartoon assignments, Feiffer could now refine his style, which was already influenced by the work of illustrator William Steig. By the late 1950s, his cartoons appeared regularly in Playboy, the London Observer, and in newspapers across the United States.

Many of these strips have been collected in books such as Feiffer’s Album, Feiffer on Nixon, and Feiffer’s Children. In 1986 Feiffer was honored with a Pulitzer Prize for editorial cartooning. He continued to create comic strips regularly for several decades, finally ending his syndicated comic strip in the summer of 2000.

While working as a syndicated cartoonist, Feiffer also began penning plays, and his first drama, Little Murders, was produced on Broadway in 1967. The play was a popular and critical success, winning an Outer Critics Circle Award and a Village Voice Off-Broadway Award, among others.

Through the 1980s Feiffer wrote several other plays, as well as several screenplays that were produced as major motion pictures. His film Popeye, starring Robin Williams, was released in 1980, and his stage works, which include the autobiographical Grown-ups, The White House Murder Case, and A Bad Friend, have been produced both in the United States and in Europe. 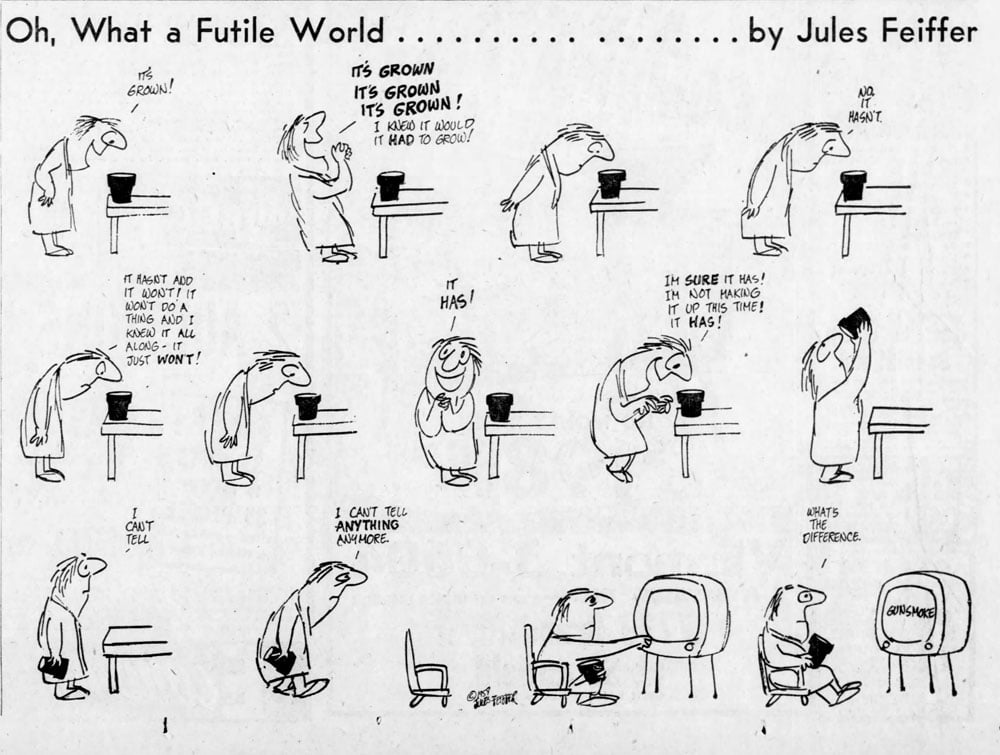 Feiffer’s debut as a children’s author came in the early 1990s with The Man in the Ceiling, a story about ten-year-old Jimmy Jibbett and his efforts to win the friendship of the popular Charlie Beemer by expressing a willingness to translate Charlie’s stories into cartoons. Cathryn M. Camper noted in Five Owls that The Man in the Ceiling “recognizes that a large part of the formation of an artist takes place in his or her youth. . . . Feiffer conveys . . . this with a sense of humor, combining samples of Jimmy’s comics to help tell the tale.”

Some of Feiffer’s children’s books feature their creator’s characteristic mature satire even as they entertain younger readers with a humorous tale. His A Barrel of Laughs, a Vale of Tears was described by a Publishers Weekly contributor as “a sophisticatedly silly fairy tale that relaxes storytelling conventions.” The topic of road rage prompted by long-distance family auto trips is the focus of By the Side of the Road, which finds the parents of an unruly eight-year-old making good on their threat: “If you don’t stop that now you’ll end up on the side of the road.”

Deposited on the side of the road and abandoned, the boy makes a new life for himself, is joined by another abandoned child, and grows to adulthood, occasionally visited by his family and becoming the subject of envy by his stay-at-home brother. While noting that By the Side of the Road is “really for parents,” New York Times Book Review contributor Cynthia Zarin wrote that Feiffer “is in top form here.”

Feiffer turns to more traditional tales for children with Meanwhile . . . , The Daddy Mountain, and Bark, George, the last a reversal of the old-lady-who-swallowed-a-fly story. Meanwhile. .draws on a fantasy tradition of a modern sort, as comic-book fan Raymond, pursued by his angry mother, decides to pull the “Meanwhile. . .” dialogue balloon out of his comic book to see if it will transport him somewhere else in a hurry.

“Frantic action and the clever theme make this a great read-aloud,” concluded School Library Journal contributor Lisa S. Murphy. In The Daddy Mountain, which narrates a small girl’s successful attempt at a daunting ascent up onto her father’s shoulders, the author captures what Booklist reviewer Jennifer Mattson described as “daddies’ special fondness for roughhousing” in illustrations that “are vintage Feiffer,” according to Grace Oliff in School Library Journal. 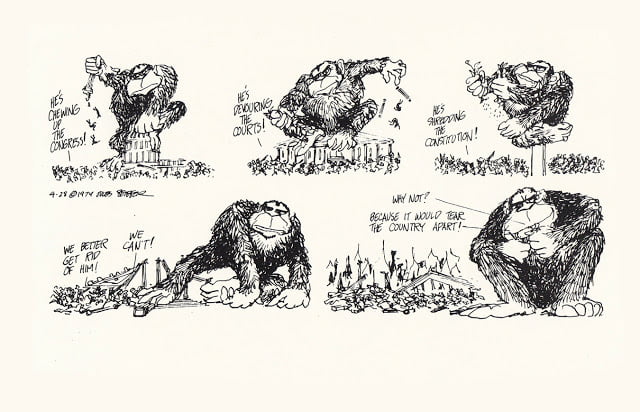 A young dog who goes “meow” instead of “arf” is the focus of Feiffer’s award-winning Bark, George, which finds the pup’s distressed mother hurrying her son off to the local vet to find the source of the problem: he has swallowed a cat. Praising Bark George as the “pairing of an ageless joke with a crisp contemporary look,” a Publishers Weekly contributor dubbed Feiffer’s simply drawn illustrations “striking” and “studies in minimalism and eloquence.”

Booklist reviewer Stephanie Zvirin praised Feiffer’s “easy to follow” text and added that the author/illustrator’s “characters are unforgettable . . . and the pictures burst with the sort of broad physical comedy that a lot of children just love.”

I’m Not Bobby finds a young boy determined to be someone else. Refusing to respond to calls for Bobby, he pretends to be a horse, a car, a dinosaur, a giant, and even a space ship to tune out his mother’s calls. Finally, dinner time and fatigue make being Bobby by far the best option, in a book that features “Feiffer’s exuberantly drawn signature illustrations,” according to a Horn Book contributor.

Dissatisfaction is also the subject of The House Across the Street, which finds a young boy wishing he lived in the larger house of a neighborhood friend. While imagining that a wealth of wonderful toys, fabulous dogs, and even a dolphin-filled swimming pool must exist in that amazing house, the boy also conjures up a family in which parents never fight, happy friends come and go, and the house rings with laughter, giving The House across the Street a poignant note while it also captures the whining note of many a “common childhood tune,” according to a Kirkus reviewer. 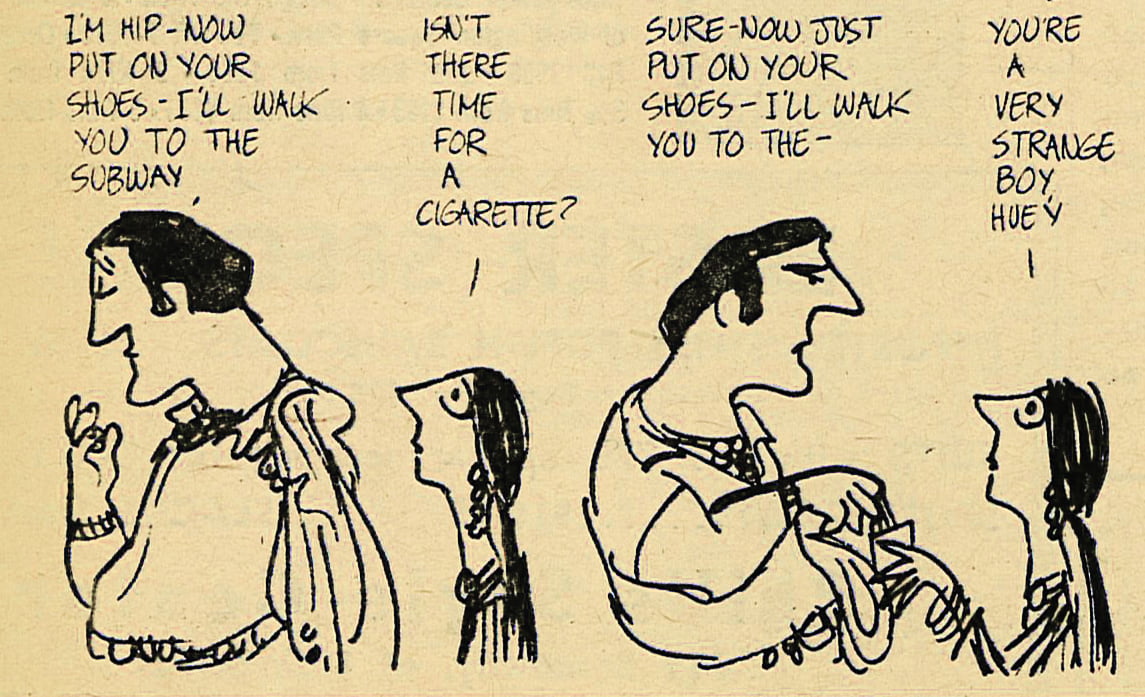 DiGaetani, John L., editor, A Search for a Postmodern 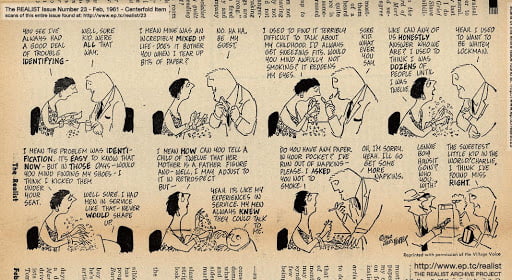