Paul Conrad was born 27 June 1924 in Cedar Rapids, Iowa, he is a political cartoonist who, in the 1960s, skewered right-wing politics and commented on civil rights, integration, and the Vietnam War.

Conrad is the son of Robert H. Conrad, a freight and passenger agent, and his wife, Florence G. (Lawler) Conrad. Conrad attended Saint Augustine’s elementary school in Des Moines, Iowa, where he first started making social comments with his natural drawing talents. Spotting a remark written on the wall in the boys’ room, he proceeded to draw a cartoon to go with it. 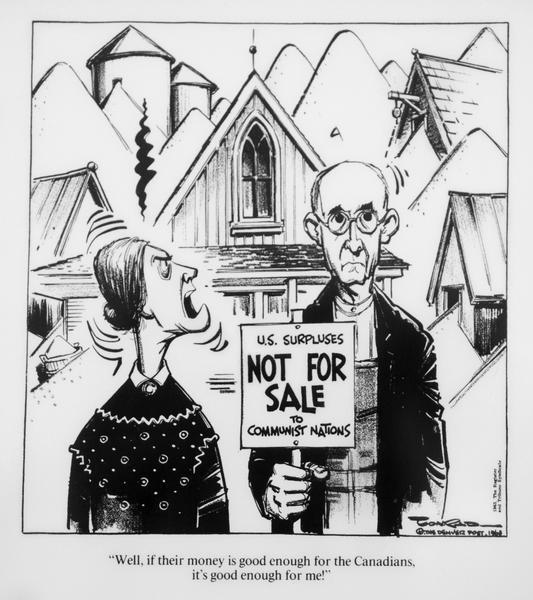 After graduating from Roosevelt High School, Conrad went to Alaska in search of work in an economy that still had not completely rebounded from the Great Depression. He ended up in Valdez, Alaska, working in construction. He returned to Iowa within eight months, was drafted into the Army Corps of Engineers in 1942, and served in the Pacific theater of operations during World War II. After his discharge in 1946, Conrad enrolled at the University of Iowa, where he started drawing editorial cartoons for the university’s newspaper, the Daily Iowan.

He graduated in 1950, although his academic average was only 1.79. Nevertheless, he impressed his art teachers, and one of them sent samples of his work to the Denver Post, which promptly hired him. Soon afterward he met Barbara Kay King, a society writer for the paper. The two were married on 27 February 1953 and had four children.

Conrad, who worked for the Denver Post from 1950 to 1964, won the 1964 Pulitzer Prize for editorial cartooning. He then joined the Los Angeles Times. Conrad’s popularity and recognition continued to grow, and he became one of the nation’s hottest cartooning properties. Throughout the 1960s Conrad, a liberal Democrat, skewered some of the most prominent men and women of the day.

A frequent target of his hard-hitting editorial cartoons was Ronald Reagan, who became the Republican governor of California in 1966 and was elected president in 1980. During his time as governor Reagan and his wife, Nancy, are reported to have called the newspaper regularly to complain about Conrad’s cartoons.

Conrad also took special satisfaction in lampooning Republican President Richard Nixon, who took office in 1969. Conrad’s depictions of Nixon so enraged him that the cartoonist was placed on the president’s infamous “enemies’ list” a few years later. Also, Conrad was audited four times during the Nixon administration, but the auditors failed to find anything wrong with his taxes.

Conrad did not spare Democratic politicians, especially President Lyndon B. Johnson, who served from 1963, following the assassination of President John F. Kennedy on 22 November, until Nixon took office in 1969. “Even the White House wasn’t big enough for that ego,” Conrad would later comment in a 1994 article in Editor & Publisher. 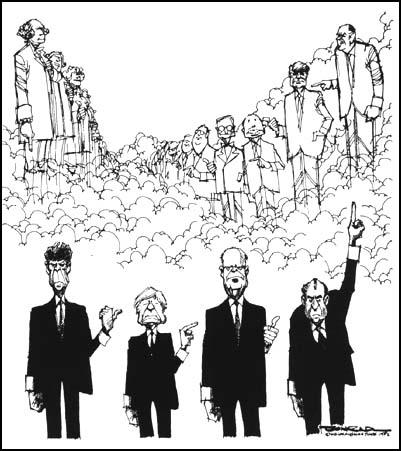 Like most Americans in the 1960s, Conrad was deeply affected by the assassinations of John F. Kennedy, the civil rights leader Martin Luther King, Jr., and Senator Robert F. Kennedy. “I’ll never forget those guys,” Paul Conrad said in the October 1999 issue of the Information Bulletin, published by the Library of Congress. “I often wonder what the country would have been like if those men had not been erased from the American political scene.”

In addition to trenchant editorial content, Paul Conrad’s cartoons garnered attention because they reflected his extensive research and were characterized by technical accuracy. While he often focused on political pretension in his cartoons, Paul Conrad also commented on the human condition in general, such as his 27 January 1967 cartoon about the Apollo 1 tragedy.

The three men on the first planned flight to the Moon all died when their space capsule caught on fire on the launch pad. Conrad depicted the infallibility of humans and the dangers inherent in space flight with his drawing of the specter of death clothed in a spacesuit holding a Mercury mission spacecraft in one hand and a Gemini craft in the other, with the smoldering Apollo mission craft in the background. It was captioned, “I thought you knew, I’ve been aboard on every flight.” 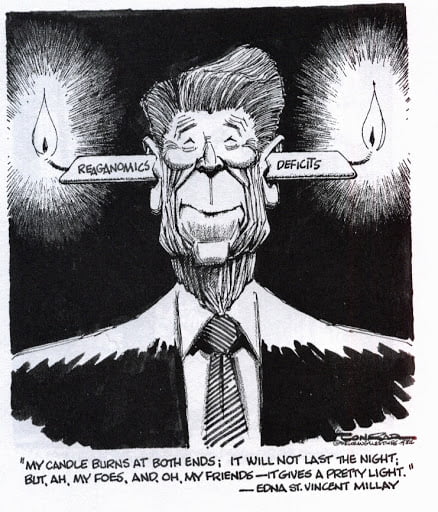 Despite his penchant for hard-hitting, gut-wrenching editorial cartoons, Conrad often displayed his sense of humor in his editorial comments. A 1969 cartoon commemorating the 20 July 1969 landing of Apollo 11 mission astronauts on the Moon and Neil Armstrong’s historic Moonwalk poked fun at the event with the now-classic depiction of a mailbox for a Moon resident already sitting on the Moon’s surface. Conrad also could poke fun at his profession, as with his Denver Post cartoon of a reporter seated backward on a worn-out old burro, which represented the media getting everything “ass-backward.”

Nevertheless, politics and government in general were Paul Conrad’s primary focus throughout the decade. An opponent of the Vietnam War, Conrad published a cartoon on 15 June 1969 that commented on the war via the Vietnam Moratorium Day demonstrations. Thousands of antiwar demonstrators gathered in cities across the nation in protest of the war. Paul Conrad’s editorial cartoon depicted the ghosts of dead Vietnam soldiers with packs and weapons marching across the sky over Washington, D.C., and the Capitol Building while protesters demonstrated below. The caption read, “If only there’d been a Vietnam moratorium five years ago.” 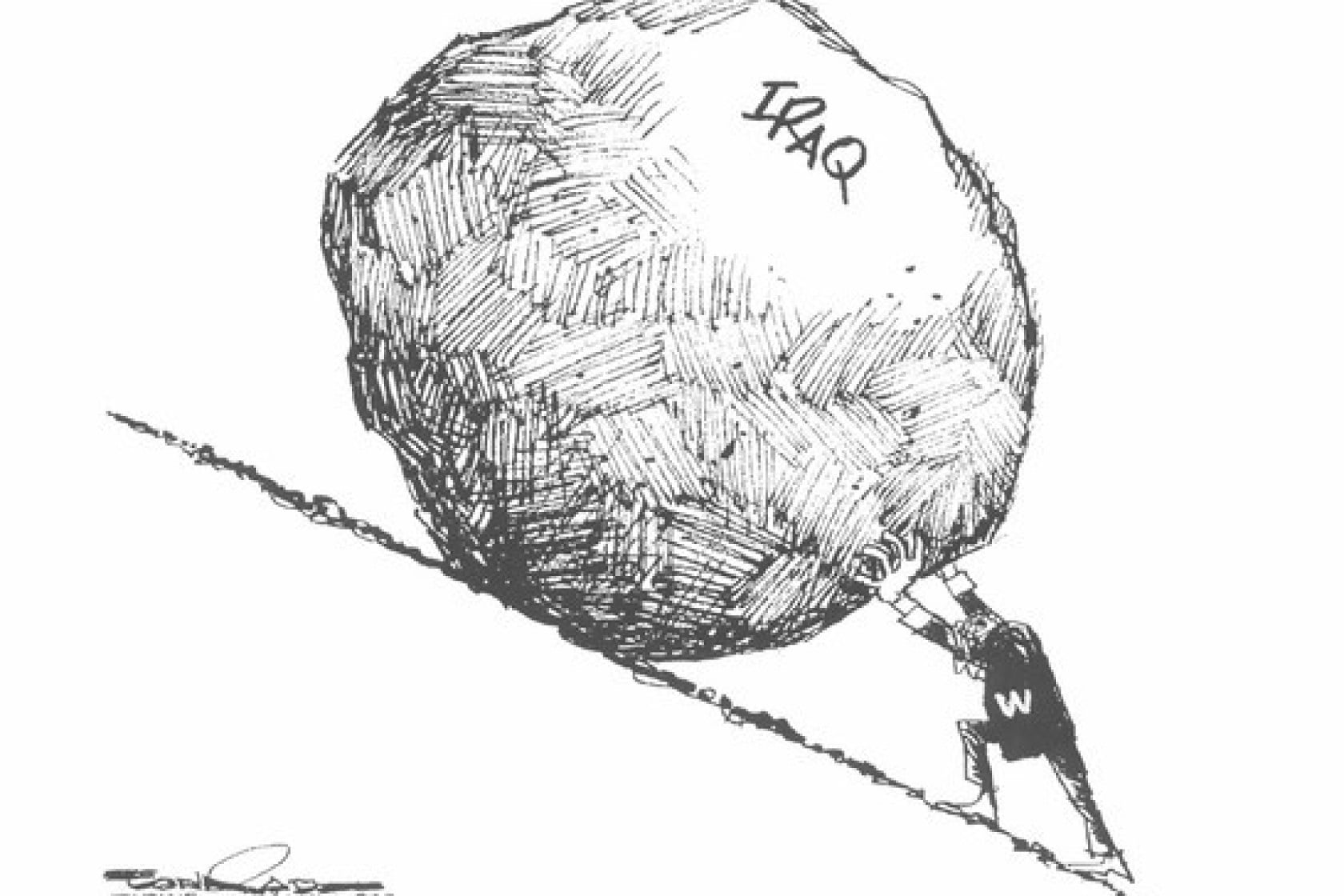 Paul Conrad’s cartoons have forced Americans to reflect on timely issues, often inspiring them and just as often enraging them. Throughout his career, Paul Conrad, who got his inspiration from reading, maintained his take-no-prisoners attitude. “I wake up angry every morning and start reading,” he once said. “Then I’m furious.” Paul Conrad, who also won Pulitzer Prizes in 1971 and 1984, retired from the Los Angeles Times in 1994 but continued to draw editorial cartoons, which the Los Angeles Times syndicated throughout the United States. He began sculpting in the 1980s and is an avid golfer.

For insights into Paul Conrad’s work during the 1960s and 1970s, his book, Pro and Conrad (1979), with an introduction by the journalist and humorist Art Buchwald, is a good place to start. Some of Conrad’s 1960s work with the Los Angeles Times is available in Conartist: 30 Years with the Los Angeles Times(1993), which includes text by Norman Corwin and an introduction by Shelby Coffey III. Other sources of information about Conrad’s early career include articles in Newsweek (12 Sept. 1977) and Writer’s Digest (Dec. 1977).