Hello! My name is Kojirom. I live in Japan. I drew political manga for the first time. Initially, I did not intend to paint Nissan Fairlady Z. The walls of the living room of DAIUKU’S house were prosaic, so I decided to draw something about Nissan. The choice of drawing Fairlady Z may have been a failure. Because of that, it took a considerable amount of time to complete. I laid a picture of the Fairlady Z out in the bottom, traced the line which looks transparent and drew. It’s a bit disappointing that at first glance it only looks like a rendering.No, should not the human being who traced regret it? The sofa in the living room appears in three frames. The way of pasting the screentone is different respectively. I didn’t do that because I wanted to discipline my tastes. I didn’t know-how making the sofa shiny. As a result, a sofa with a different luster was drawn for each frame. The real intention of the words of DAIFUKU may be hard to be transmitted. Some readers may interpret the meaning of Daifuku’s lines as follows: “Carlos Ghosn had fired a large number of employees, and he himself was buying and playing with a mega-yacht, so he ended up being punished as a result.”But what he wants to say is quite the opposite.“Didn’t the Japanese judiciary and the media want to convict Mr. Ghosn at all costs? As a stepping stone, I am ashamed of the Japanese judiciary and the mass media if he was trying to instill the wrong image of buying a mega-yacht and playing with the money he had fraudulently obtained. And I have to be ashamed of myself for riding on it. I don’t know if Mr. Ghosn is guilty or not guilty. Apart from that, I sympathize with the fact that he is unlikely to be judged fairly.”That’s what he really wanted to say. Well, drawing manga about politics is a very careful task! I want to acquire the ability to express all of my thoughts in four frames earlier. See you again! Please visit my web site. https://23notebook.net/ 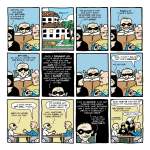 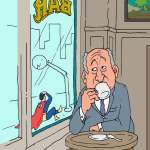