Rogelio Naranjo, the cartoonist who for more than 50 years portrayed Mexican politicians and politicians, as well as the most prominent social movements, such as the student of 1968, passed away on the night of Friday, November 11. His works were published in various printed and electronic media, the main being the magazine Proceso and the newspaper El Universal. He has been to many caricaturists, an example of congruence and social commitment. 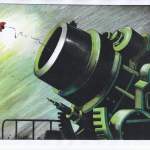