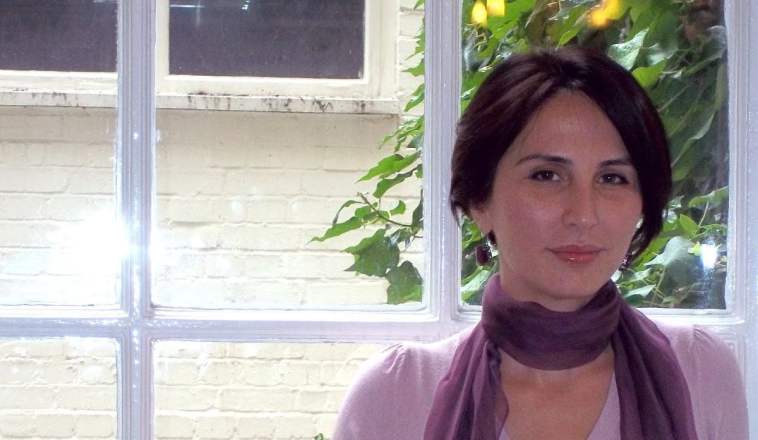 We want to convey a message of peace through caricatures

– Aslı Delikara, Turkey
“I would like to see especially children to visit our exhibition and see for themselves how artists from all over the world convey the message of peace through their drawings,” says Aslı Delikara, general coordinator of the Kadesh 2016 international caricature exhibition.

(A. Meriç Şenyüz – İleri Haber) As the winds of war blow in the Middle East and in Turkey, a caricature exhibition is held convey the message of peace to a wider audience. The Kadesh 2016 Exhibition organized by Günebakan Culture Association and the Haziran Science, Art, Media Assembly will host the works of 160 artists from 58 countries. Before the exhibition kicks off on January 7th at Cezayir Meeting Hall, we spoke to Aslı Delikara, general coordinator of Kadesh 2016 and President of the Günebakan Culture Association about the process.

How did you come up with the idea for such an exhibition?

The idea came up in the Science-Art Media assembly of Birleşik Haziran Hareketi (United June Movement) while we were talking about organizing an event on the subject of peace. While we’re discussing alternatives such as a panel or a concert in a park I thought about doing something permanent like a caricature exhibition. I have been following caricature magazines for years, and I admire the power of a drawing, its persuasiveness, the way it can convey even the toughest subject with elegance.

So we agreed upon the caricature exhibition. Some of us have doubts about our lack of experience in such organizations, but we managed to convince them. We can now say that it really was not easy, but we are satisfied with the result. It’s also Haziran’s the first involvement in an international organization, which makes it doubly important.

What are the sensibilities you aim to instal? Who is your target audience?

Art leaves its permanent marks in our lives as we try to understand life, find questions, discover different answers, and think differently through it. Caricature is very popular in Turkey; thousands of share caricatures in the social media, we see it in ads, people try their hands at drawing; it is widely accepted in almost all levels of the society.

Therefore we chose art as the medium for the creation of permanent works on the subject of peace, and the art form we chose was the caricature. People of all ages can visit this exhibit and see for themselves how people from all over the world express the desire for peace, and later they themselves might pick up drawing. Personally, I would especially like to see children visit. Art teachers can visit along with their pupils and we could facilitate the discovery of new talents.

Kadesh is widely accepted as the first written peace treaty in the world. It was signed thousands of years ago, somewhere in Mesopotamia, close to Turkey’s border with Syria in the Gaziantep province. We grew up with the news of conflict and war in the Middle East. So did the generations before us. Nowadays it is beyond geography; the whole world is involved in this problem. In this context, Kadesh is a nice reminder and a naive wish for us.

A caricature exhibition on the subject of peace does not seem to be a unique idea. Similar contests and exhibitions are organized every year. In what ways does Kadesh 2016 stand out from the rest?

The problem with exhibitions on Peace is –in my opinion– the sheer number of the white dove and olive branch drawings. As our subjects are the Middle East and Peace; the visitors will see how the world looks upon the Middle East, the war in Syria, the refugee problem, the Arab Spring in the form of original drawings.

Probably our boldness born of our inexperience also played a role in this. Replying “this drawing is too general, please send us a drawing on the Middle East” to an artist who has shown the grace of sending a drawing may be considered a bit of a disgrace in the art world. Yet this is what we did; we also said “we want this instead of the one you sent us” when we saw that the artist had other drawings more related to the subject that we liked. Thankfully, everybody indulged us :).

How many countries are represented?

Kadesh 2016 will display works of 160 artists from 58 different countries from Haiti to Norway, Costa Rica to Indonesia. Such an event might be quite normal or standard for those whose are used to holding or participating in exhibitions, but none of us is artists; until we began to organize we did not even have caricaturist friends. The foreign artists we had invited hadn’t even heard of the HAZİRAN or the Günebakan Association. The resulting exhibition is very dear and a source of pride for us, since the relationships behind it were founded one hundred percent on mutual trust and goodwill.

In your opinion, from which countries, which artists came the most original and exciting works?

I would set Iran apart since we received very beautiful works from Iranian living both in Iran and abroad. We have seven women artists, three of whom are Iranian. We also have some very powerful works from Russia, Ukraine, France, Belgium, and Cuba. I can’t really give artists’ names because it would be a really long list. An artist from Russia, who’s a director of a caricature collective and an art teacher has his whole class draw for us. They’ve sent some really sweet works; we will find a way to display them, too

The exhibition is jointly organized by Günebakan Culture Association and United Haziran Movement Science, Art, and Media Assembly. You are a member of both. What can you tell us about these organizations?

I aim to contribute to both as long as I am able. United June Movement (HAZİRAN) is an organization founded with the aim of organizing the energy that revealed itself the June Resistance (the Gezi Park protests). It was founded by forums held countrywide and especially made its voice heard with the “School Boycott for Secular Education” held last year. The Haziran Science, Art, and Media Assembly was formed in April 2015 to receive the message of HAZİRAN to the scientists, artists, and media people… Nowadays HAZİRAN is conducting a campaign against the proposed presidential system, the education system becoming more religious and exploitation of labour with the slogan “Lend a Shoulder, Help Us Change It”.

Günebakan is a very new body. Its foundations were formed by the Haziran Nişantaşı Assembly. The Nişantaşı Assembly which was formed almost simultaneously with this exhibition idea and shouldered most of the work in organizing it was a group dominated by old Green party members and art circles, people who preferred lasting works to criticise politics. After a few meetings, we realized that what we wanted to do would be beyond HAZİRAN’s scope.

Therefore we decided to channel our energy to concrete, lasting works and we founded Günebakan. Kadesh 2016 is our first activity; after this we have several projects such as a work on the common linguistic and cultural heritage of the Anatolian peoples, setting up a food chain between the food producers and street animals, transforming the urban trees to fruit trees through grafting. We also plan to publish a digital newsletter aimed at the world media every three months containing news from human rights, ecology, exemplary works of art, and important activities in Turkey.

Did you receive any support from the caricature collectives in Turkey? What were some of the problems you faced in organizing this exhibition?

First the problems. As soon as the decision to hold this exhibition was made I tried to reach the Caricaturists Association. I called their president, I sent emails, I contacted a member through a common friend. They never responded; I also think that they never made the announcement to their members. We organized this exhibition only on our own. Actually, it turned out really well; we had to learn how to organize events and we weren’t limited to the artists from a small circle and were able to work with any artist whose work we liked and the artists we got through them.

A tragicomic moment was when the artists were warned (via the social media) that the exhibition was organized by CIA agents or masonic organizations. Someone even has written “There’s nobody named Aslı Delikara. False name. I looked it up.” We received an even more fantastic comment on our exhibition contacts page: “This project looks like it was organized so that someone’s work would be displayed in an international exhibition.”

The real hardship was my lack of foreign language knowledge. It is almost customary for the weight of a project to remain on the shoulders of the one who proposed it. Thus finding artists became my job. Unfortunately, my English isn’t adequate. I wrote examples of invitations, my friends translated them; then a question or answer would come and it would have to be translated again. I found myself writing responses to automated responses. I think my English improved at least a level in this process. 🙂

Some of those who lent their support include the editor of Toonsmag.com from Norway, Arifur Rahman, and artist Firuz Kutal; and artists Hicabi Demirci ve Halis Dokgöz from Turkey. We got to know these names in the process of organizing the exhibit; they really helped us get a beautiful result. As soon as Toonsmag made the exhibition announcement from the front page we received works from 30 artists in the first week alone! Tayfun Mater was a great help in finding a venue and sponsor. I am very thankful for those names.

The Middle Eastern geography that has seen so many wars throughout its history is once again witnessing war, and it seems that there are even more wars on the horizon. How do you think peace can come to this region?

It probably won’t come until we run out of oil. The peoples of the Middle East are inclined to perceive life as made up of only pain and to blame others for what befalls them. They lack the joy of living and seems that they don’t believe they will ever find happiness in this world. This might have many religious, cultural, geographical reasons. Perhaps a reform in İslam will open the way for this, but I don’t think it will be in our lifetime. 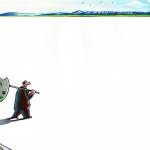 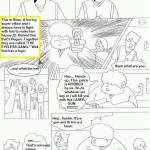