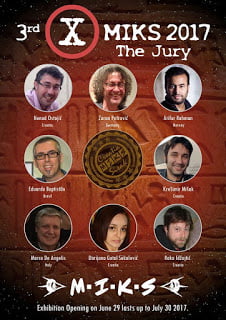 What is the Origin of Human Race? Were we created by Gods or Ancient Aliens? Where did they come from? Why did they leave? Where did they go? What was their goal? Are Humans Aliens on planet Earth? What is the Secret of UFOs? Who built the Pyramids? Do Alien Civilisations exist? What would happen if we Contacted them?

The Cartoonists’ task is to create their work based on those Topics.

The task for the Portrait Cartoonists is to draw people who have created the theory of Ancient Astronauts (Aliens) or People who claimed there are Ancient Civilisations in the Universe, like Erich von Däniken, Carl Sagan, Giorgio A. Tsoukalos, Stephen Hawking, Nikola Tesla, Neil deGrasse Tyson, George Noory, David Hatcher Childress…
_____________________________________

C. ENTRIES
1. Works must be originals and any kind of graphical technique will be accepted, including digital artwork, sent by Internet, if the prints are SIGNED BY THE AUTHOR and if they are indicated as PRINT NUMBER ONE, or an original to this contest.
2. Entries can be either black and white or coloured.
3. There should be the name, the surname and the address on the reverse side of the cartoons.
4. The Cartoons must not have bee previously awarded on the festival.
5. Maximum 5 entries will be submitted (per topic).
6. Size of entries is an A4 or A3 format (300 dpi).
7. Each Cartoonist must fulfil the Application Form and send it with your work (regular mail or e-mail)
_____________________________________

H. OTHER CONDITIONS
Only at Explicit Request will the Remaining (Original) Works be returned to the owners (at their expense).

The Organizer reserves the right to reproduce the works sent to the MIKS 2017, as the advertising material, without being obliged to pay a fee to the author whose work may be used.