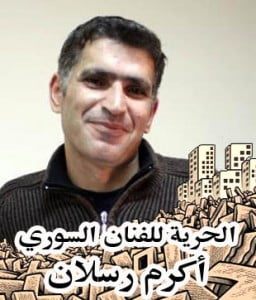 As the Syrian revolution enters its fifth year, many of its artists, poets, writers and activists remain incarcerated, denied their basic rights in Assad’s prisons. Akram Raslan, one of the loudest, most creative dissident voices in the uprising, is a perfect example of the regime’s tactics to suffocate the civil and artistic movement in Syria.

The personal blog of Syrian artist Akram Raslan was last updated on January 27, 2011. He was arrested from his workplace at al-Fida newspaper on October 2, 2012. What happened during that time tells the story of the Syrian cartoonist, born in Hama in 1974.

Raslan who seems to never had the time to publish his paintings on his blog, devoted all of his time to the Syrian revolution, using art to agitate against a tyrannical regime. He began by mocking the reforms announced by the regime in 2011. He painted a Syrian soldier standing on top of a hill of dead bodies, holding a banner that reads “reforms”.

As the uprising gained momentum, the paintings of Raslan became more inciting, criticizing the tyrant himself. He portrays Assad drowning with the blood of his own people in an hourglass. His last published drawing was the map of Syria, surrounded by a snake that has the head of Assad. “The crisis is almost over”, a caricature by Akram Raslan.

Raslan and other prisoners of conscience were referred to the Court of Terrorism in June 2013, where they were put on trial with no witnesses or defence attorneys. Some websites and newspapers have claimed the artist was killed, while two Facebook pages deny the news.

“Under this regime, the people do not have the ‘luxury’ to know where their imprisoned loved ones are, or even if they are alive or not,” says artist Hani Abbas bitterly. “This is the dark reality we have been living in for years. I wish Akram could be among us again, him and all the detainees.”

Abbas who won the “Cartooning for Peace” prize in Geneva 2014, will soon publish a Syrian caricature magazine titled Akram, in honour of his friend.

“I met him in 2002, but I had known him previously through his drawings. However, I got to meet the real Akram with the outbreak of the revolution, which was a real test of our material, sincerity and courage.”

“Akram was one of the most important artists to paint and document the revolution. The bravest.. or perhaps the only brave one,” Abbas adds “I remember our last discussions. Our dreams with other colleagues. I think and speak about him a lot. Akram, who was punished for standing up to the regime.” in a press release, Mr. Joel Pett, President of the Board of Directors of CRNI said: “CRNI gives Akram Raslan our annual Award for Courage in Editorial Cartooning in recognition of his extraordinary courage in confronting the forces of violence with cartoons that told only the truth.”

The CRNI describes the nature of Raslan’s charges that “range from collaboration with the rebel groups, working against Syria’s Constitution, insulting the country’s president, incitement to sedition, promoting revolt against the public order, and undermining the prestige of the Syrian state.” CRNI also called upon the Syrian government to “drop these charges against Mr. Raslan, and bring him back to his family.”

Some of the globally-renowned cartoonists also stood in solidarity with Raslan, during the Saint-Just-le-Martel festival in France, 2013. Artists like Antonio Antunes Moreira (Portugal), Steve Sack (USA), Marlene Pohle (Germany) joined to sign Raslan’s picture during the festival that marked one year after his detention.

The cause of Akram Raslan also found resonance closer to home. The Syrian expatriates in Greece displayed his artworks, while the Sweida’ Media Center made a video exhibiting a collection of his caricatures.

Antagonizing artists and intellectuals have long been a defining characteristic of the Assad regime, father and son. This is because the regime had realized the extent of the artists’ ability to influence the street, articulates Fadwa Suleiman, Syrian artist and activist who had a leading role in anti-regime demonstrations. 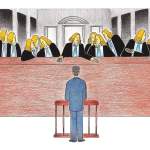 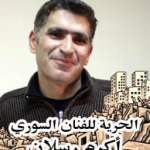