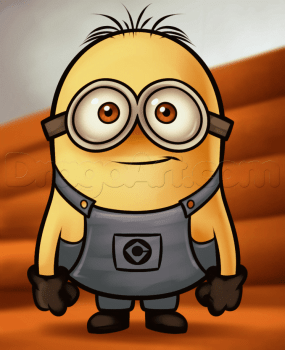 How to Draw a Minion from Despicable Me, Grus Minions, 8 Steps, Tutorial by Dawn Darko, United States You will now make a thickened line to start drawing the head. Add some sprigs of hair like so, then proceed to step three.

Okay, one of the signature things about these minions is their big goggles or glasses. You will draw the shapes of the glasses, then draw in the mouth and more of the head on the sides

Next, draw in the frames, then draw the eyes including coloring in the pupils.

Here we will finish the arms by drawing in the hands in the form fists. Draw the end of the jumpsuit, then draw the patch on the front.

You will end this step by drawing the legs, and shoes. Add detailing to create the soles, then you are done so begin erasing your mistakes.

That’s it, now all you have to do is enjoy coloring in one of Gru’s Minions. 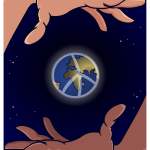 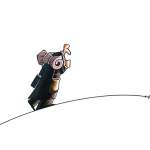