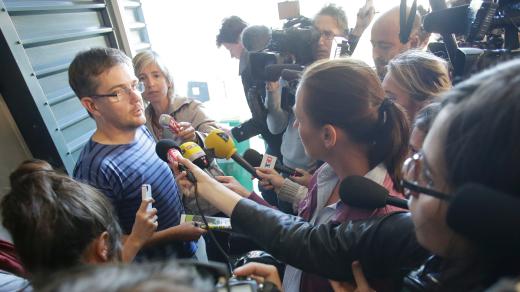 ‘A Drawing Has Never Killed Anyone’ – Charlie Hebdo’ Editor in Chief

The editor in chief of the French satirical magazine Charlie Hebdo insists that their publication of Muhammad caricatures was no provocation, but a signal that free speech is alive and well in the country. Come what may, the magazine won’t stop criticizing whatever it wants, he says. But his office remains under police protection.

APStéphane Charbonnier, editor in chief of Charlie Hebdo, is at the centre of a media firestorm over the publication of Muhammad cartoons.

The eye of the media hurricane is in a nondescript office building located between manicured tennis courts, a cultural centre and the Paris ring road. A couple of advertising firms are located here, as is a department of the city police which is responsible for traffic tickets. The location is, above all else, discreet. There is no nameplate that refers to the weekly magazine Charlie Hebdo. The publication, which has around 25 employees, is listed on the intercom under a different name. The only difference to the normally quiet atmosphere is that a riot police van is parked outside the building.

It is here, in the far east of the French capital, that the publisher and the editorial staff of Charlie Hebdo have worked since their former editorial offices were destroyed a year ago in an arson attack.Although no one claimed responsibility for the crime, it was apparently motivated by cartoons about Islam that the magazine had published in a special issue under the polemical title “Charia Hebdo,” a reference to Islamic Sharia law.

Now the magazine and its Editor-in-Chief Stéphane Charbonnier, who is also a cartoonist himself, are back in the headlines. The satirical magazine has triggered a storm of indignation with its publication of cartoons of the Prophet Muhammad this week. Representatives of the French Council of Muslims, prominent imams and French government officials have all criticized the professional polemicist, who violate political, social and religious taboos on a weekly basis. France has stepped up security at its embassies and other institutions abroad as a precaution.

The US government also expressed concern at the publication of the cartoons. “We don’t question the right of something like this to be published, we just question the judgment behind the decision to publish it,” said White House spokesman Jay Carney.

But Editor-in-Chief Charbonnier, who is known to his colleagues as “Charb,” appears relaxed despite the uproar. Surrounded by TV crews from Japan, Qatar, Belgium and South Africa, as well as French journalists, he sits at his desk in the corner of a large room, where he creates his cartoons. He sees himself mainly as a journalist who is just doing his job. “The accusation that we are pouring oil on the flames in the current situation really gets on my nerves,” says Charbonnier. “After the publication of this absurd and grotesque film about Muhammad in the US, other newspapers have responded to the protests with cover stories. We are doing the same thing, but with drawings. And a drawing has never killed anyone.”

The cartoonist claims he doesn’t want to deliberately provoke anyone. “We publish caricatures every week, but people only describe them as declarations of war when it’s about the person of the Prophet or radical Islam,” says Charbonnier. “When you start saying that you can’t create such drawings, then the same thing will soon apply to other, more harmless representations.”

Issues of the magazine hit newsstands on Wednesday with the front cover showing an Orthodox Jew pushing a figure in a wheelchair wearing a turban. There were several caricatures of the Prophet on the inside pages, including some of him naked. Many Muslims consider any representation of Allah or the Prophet Muhammad offensive.

Charbonnier doesn’t regard the current cover story as a PR stunt or cheap advertising — even if the print run of 75,000 is already sold out. “Extremists don’t need any excuses,” he says. “We are only criticizing one particular form of extremist Islam, albeit in a peculiar and satirically exaggerated form. We are not responsible for the excesses that happen elsewhere, just because we practice our right to freedom of expression within the legal limits.” Charbonnier describes himself in modest terms: “My job is to provoke laughter or thinking with drawings — for the readers of our magazine.”

What does he think about the reactions of French Muslims? “If they are not amused by our cartoons, they don’t need to buy our magazine. Of course, they are allowed to demonstrate. The right to protest needs to be protected, so long as one abides by the law and refrains from violence.” Charbonnier believes that French Muslims should be citizens like everyone else, which requires them to also be tolerant. “If the government believes that Muslims have no sense of humour, then that’s an insult,” he says. “It turns the faithful into second-class citizens.”

No Fear of Reprisals

Charlie Hebdo has received support from precisely those politicians who are normally the magazine’s targets: French conservatives and even Marine Le Pen, head of the far-right National Front. “Can I allow my country to be reduced to ruins, just because one of the approximately 9,000 titles that are published in France has printed a caricature?” Le Pen said in a television interview Wednesday. “Do we want to live in fear and terror and practice self-censorship?”

Charbonnier says he found her comments “laughable.” He points out that Marine Le Pen does not like to be caricatured herself.

He also says he does not fear reprisals. So far, only the Charlie Hebdowebsite, which was hacked on Wednesday, has been attacked. “If we worried about the consequences of each of our drawings in each of our 1,057 issues, then we would have had to close shop a long time ago.” Nevertheless, he is grateful for the protection of the police, who he says “politely and with concern” inquired about the contents of the new issue already while it was being printed. “It’s crazy,” says the cartoonist with a smile. “Of all publications, our magazine, which mocks the police at every opportunity, is now protected by it. Which only goes to show that freedom of speech is protected in our country.”

There will continue to be no taboos at Charlie Hebdo in the future. “It should be as normal to criticize Islam as it is to criticize Jews or Catholics,” Charbonnier says. Is he afraid of attacks or violence directed against him and his colleagues? “I have neither a wife nor children, not even a dog. But I’m not going to hide.” On Friday, another edition of 75,000 copies will appear.

Just in case, the phone number of the local police station is posted at the entrance to the editorial offices: “Contact for emergencies.”

‘A Drawing Has Never Killed Anyone’ – Charlie Hebdo’ Editor in Chief. 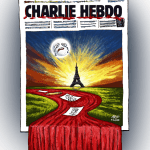 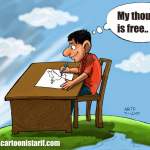