DRINK multitude of personalities crawl out of each other

In this Drink animated short film, a young man experiences a curious case of reverse voraphilia . A sip from a mysterious green liquid causes a twisted reaction, as a multitude of personalities crawl out of each characters mouth. The result is an epic pile of discarded skin, crowned by the original young man.

A second sip causes another maelstrom, this time in reverse order. The young man stumbles away, exhausted by the process of physical mutation that showed him all the personalities, cultures, races, and creeds within himself. The cautionary tale concludes with a young lady approaching the same mysterious jug. “Drink” was shortlisted for the 2002 Oscars for Best Animated Short.

Directors Note:
This was my first film. I created it while working full time at MTV back in the 90’s. I would wake up every morning at 5am, work a few hours before going into work on “Daria.” The concept for people crawling out of each others mouths is reminiscent of an earlier piece I drew called “Swallow Face” which was an ID Spot for MTV. Interesting fact about this film, it was colored by Shannon Prynoski, who wanted to learn photoshop. She is not the owner and president of one of the largest animation studio in the US. 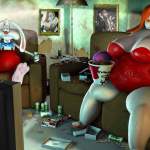 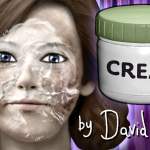