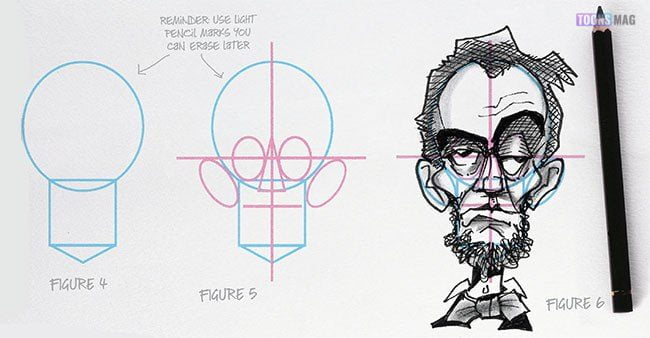 How to Draw Caricatures - The First Thing to Know

How to Draw Caricatures – The First Thing to Know

It never fails. I can be drawing at any type of event, regardless of the audience, be it children, adults, a corporate retreat, company picnic, convention, or festival and someone will always ask “How do you do that?”

“Do what?” I reply. I love to draw and talk at the same time.

“What you are doing. Drawing her so effortlessly and fast, how do you do that?”

“Well first and foremost, practice, practice, practice. Secondly, anyone can learn to draw the human face. Learning to do caricatures is based on the rules of human anatomy. When you learn to draw portraits, you have to have an understanding of human anatomy. Once you get that down, then to get to the level of drawing where you can do caricatures of people in live situations and do them quickly you have to understand one very important factor that separates the caricature art form from the portrait art form.”

“Okay, and what is that one thing that separates caricatures from portraits?”

“It’s very simple really to draw a caricature. Once you have the rules and laws of human portraiture down pretty well, you throw everything you learned out the window and make up your own rules.” Then I flash a snarky grin and ensure that I am kidding with a confident wink.

That conversation has happened more than I can count. I can guarantee that it will happen at least once in a 4-hour gig. Now all kidding aside, there is some truth about throwing all the rules out the window. Indeed, the caricature art form is loosely based on the rules of portraiture. I will teach these rules to all young people and often give a brief demonstration of the wonders of the human face and how anyone can do a basic portrait, given one very important foundation lesson. And that lesson is that the human face is extremely geometric. Once someone learns and understands that, then they can throw the rules of portraiture out the window and begin caricaturing. Sort of…

The following information is approximate at best. This is a generalization of the guidelines and when applying to actual drawings of people, remember to look at their features.

The human face is geometric. How cool is it that we are designed with everything relating to one another within ourselves? So let’s get to it. First and foremost the human head is dividable horizontally into the facial and cranial mass. It is also comparatively symmetrical. The left and right sides are the same.

Now since I mentioned the nose let’s continue with the nose. Feel free to pick your nose, to draw, that is. The bottom of the nose is roughly between the horizontal axis and the base of the chin. The nostrils will line up with the inside corners of the eyes. Here is a handy tip: most noses and ears are the same length. Is that bizarre or what?

Now we can get all high on our mastery of the basic human facial anatomy. Give yourself a woo! Now please remember these are all basic generalized median normal measurements borrowed from Leonardo da Vinci. The most wonderful thing about doing caricatures for me is that every single person is different. There are now two faces alike, even identical twins have some minor differences. (so I’m told) The point is, when drawing, remember these general rules and use them as a basis of what you are observing. The best way to improve as an artist is to look closely at your subject and learn to see differently.

How to Draw Caricatures Video Tutorial 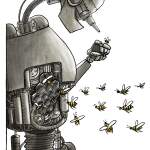 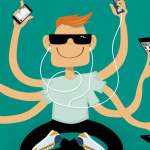