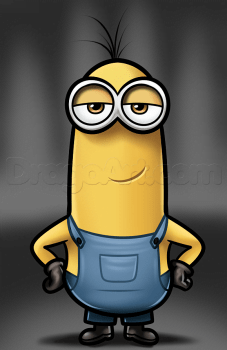 Make an oblong round shape for Kevin’s head and body like so and then sketch in the guidelines for the face and arms. We will define the shape of Kevin’s head and then draw in the google shapes which will also be the guides for his eyes. Draw in the frame for the goggles and then draw the eyelids and eyes. You will now draw the arms and straps for the overalls like so. Finish the shape of his body and then draw the gloved hands which are resting on his hips. Almost done folks. Draw the pants and then draw Kevin’s small feet along with the pockets and sides of the overalls. Add a sprig of hair and then his smirk. Erase those mistakes and all the guides you made. That’s it, Kevin is all done. Now just color in this Minion before you show off your drawing. 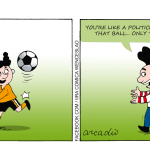 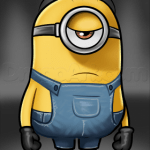