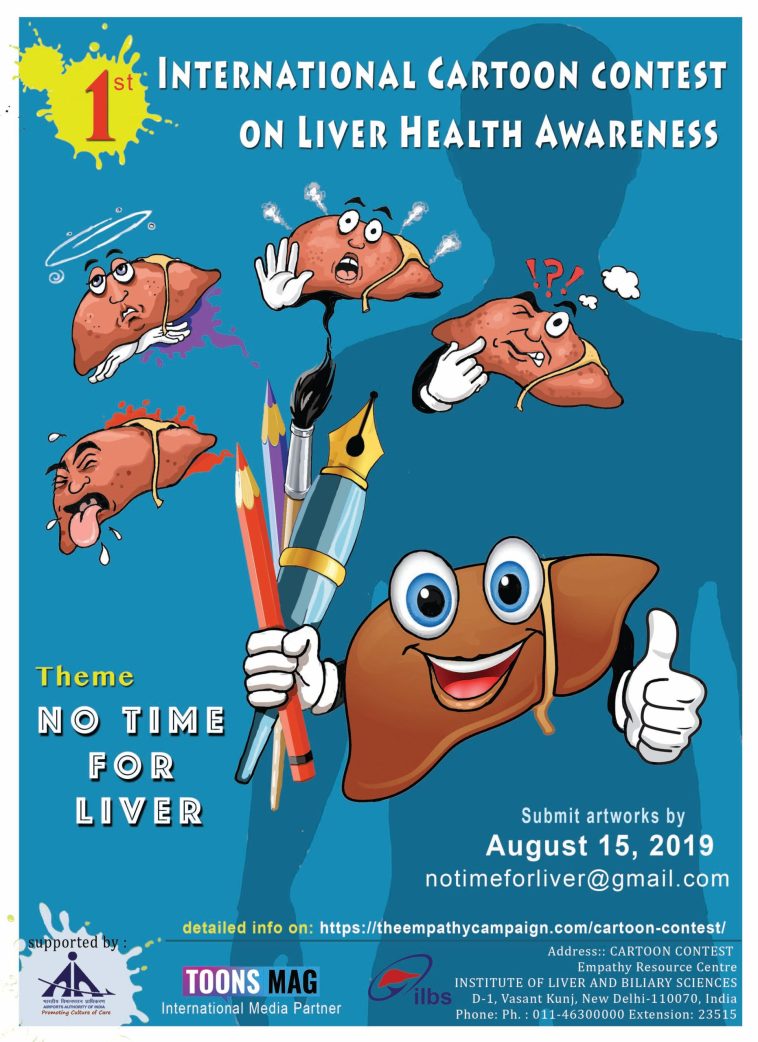 PARTICIPATION
• Both professional and non-professional cartoonists are welcome to participate in this contest.
• The competition is open to all individuals aged over 12 * (Corrigendum).

Works must be originals. All graphic techniques are allowed.
Works may be black & white or colored.
Each entry should include a cover letter with the cartoonist’s
full name, postal address, contact no. and E-Mail ID.
The digital works have to be sent in JPEG format with a minimum resolution of 300 dpi (2480 x 3543 pixels).

The cartoons are to be drawn on A4 format.
(maximum size of 3 MB per cartoon) for digital cartoons
Number of entries per contestant: maximum of three
Cartoons sent by post need to have the name and address of the cartoonist on the back-side of each cartoon.
The original versions of the cartoons will be accepted.

The organizer (INSTITUTE OF LIVER AND BILIARY SCIENCES) cannot be held responsible for lost or damaged cartoons during the shipment.
Works should not be awarded at other festivals.
Works must not be older than one year.
The Prizes will be taxed according to Indian legislation.
The Organiser/ILBS shall not be responsible for the failure of a winner to receive the prize for reasons that are not related to the Organiser/ ILBS –

PUBLICATION RIGHTS
• Property rights – Prize-winning works will become the property of the organizer (ILBS) or theme sponsor. Further, the cartoonist provides Royalty-free and license to publish and publicly display the entries (Whether winning or not winning an award) for non-commercial purposes.• By entering the competition, the cartoonist represents and warrants that the work is an original work of the cartoonist and does not
infringe on the rights of any third parties.
• All selected works for the exhibition may be used by the organizers to promote the contest.
• Awarded works remain the property of the organizer

JURY
• Decisions made by the jury cannot be challenged.
• No correspondence with the jury will be allowed on their decisions.

The prize will be given in equivalent Indian Rupees

About The Theme: No Time For Liver!

NO TIME FOR LIVER
The liver, in many ways, is the reflection of a person’s health.

To the Mesopotamians, the liver was the body’s premier organ, the seat of the human soul, and emotions.

The ancient Greeks linked the liver to pleasure.
The second-largest organ of the body, the Liver is the control tower of the body and has tremendous regenerative prowess. It does many functions, such as bile secretion, filtering toxins, redistributing nutrients and producing digestive enzymes, keeping track of the body’s energy demands, releasing glucose as needed, storage and elimination

For the liver, the “ to-do list” is long and is only second to that of the brain and the number of functions is well over 300 items. But do we really give attention to this hardworking and humble part of our body that it deserves?
Liver diseases account for approximately 2 million deaths per year worldwide, 1 million due to complications of cirrhosis, and 1 million due to viral hepatitis and hepatocellular carcinoma.

Cirrhosis is currently the 11th most common cause of death globally and liver cancer is the 16th leading cause of death; combined, they account for 3.5% of all deaths worldwide.

Alcohol-use disorders are on the rise and are at risk of alcohol-associated liver disease.

Approximately 2 billion adults are obese or overweight and over 400 million have diabetes; both of which are risk factors for non-alcoholic fatty liver disease and hepatocellular carcinoma.

The global prevalence of viral hepatitis remains high, while drug-induced liver injury continues to increase as a major cause of acute hepatitis.

Liver transplantation is the second most common solid organ transplantation undertaken however presently less than 10% of global transplantation needs are being met.
Source: https://www.ncbi.nlm.nih.gov/pubmed/30266282, European Association for the Study of the Liver. Published by Elsevier B.V.

According to the Government of India estimates, India has 50 million people infected with viral Hepatitis B and C. However, over the majority of them do not know that they are infected as the symptoms are not visible in early stages. Due to the lack of this awareness, most of them develop complications and succumb to liver cirrhosis or cancer, which require very costly treatment and are often fatal.

That is why to raise awareness around liver health, we want to use the power and influence of cartoons and Illustrations as a communication tool.

Institute of Liver and Biliary Sciences with support of Airports Authority of India is Organising First INTERNATIONAL CARTOON CONTEST on Healthy Liver Awareness under THE EMPATHY CAMPAIGN: Empowering People Against Hepatitis.

We identified the main topic of the contest as “NO TIME FOR LIVER”. This is a Call to creative people to highlight the attention the LIVER deserves! 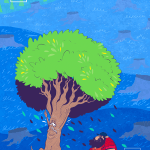 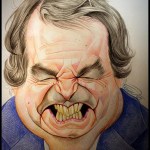