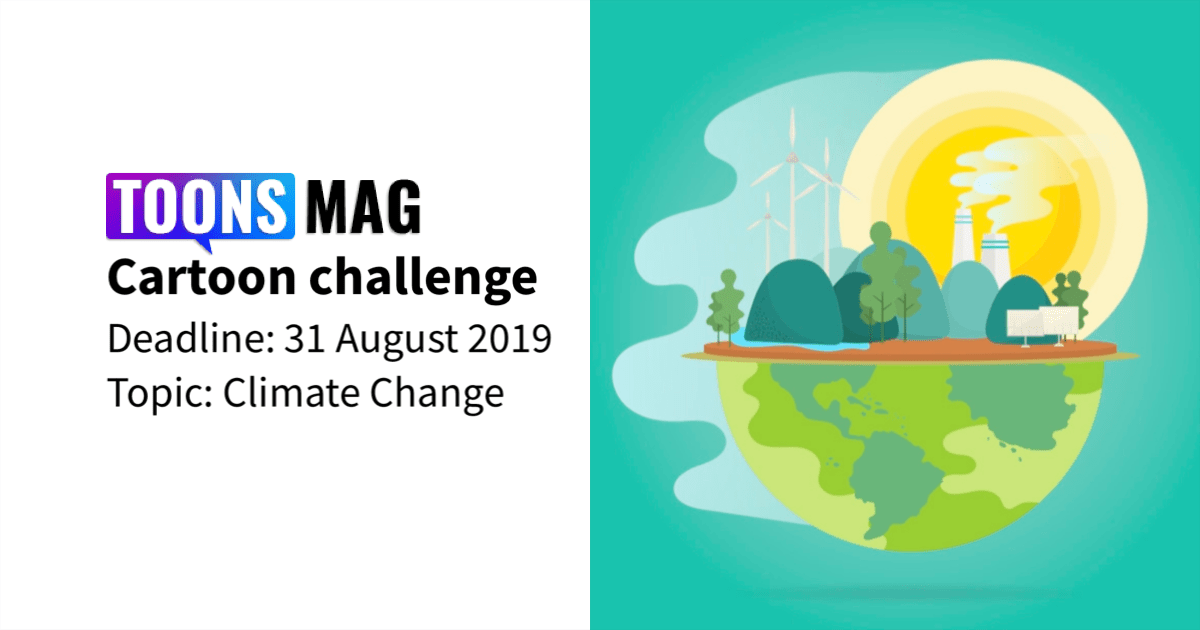 Climate Change Cartoon Challenge in August 2019. The most voted top three cartoonists will consider as the winner.

About the Climate Change Cartoon Challenge:

The term “climate change” is often used to refer specifically to anthropogenic climate change (also known as global warming). Anthropogenic climate change is caused by human activity, as opposed to changes in climate that may have resulted as part of Earth’s natural processes.
Climate change occurs when changes in Earth’s climate system result in new weather patterns that last for at least a few decades, and maybe for millions of years. The climate system comprises five interacting parts, the atmosphere (air), hydrosphere (water), cryosphere (ice and permafrost), biosphere (living things), and lithosphere (earth’s crust and upper mantle). The climate system receives nearly all of its energy from the sun, with a relatively tiny amount from earth’s interior. The climate system also gives off energy to outer space. The balance of incoming and outgoing energy and the passage of the energy through the climate system determines Earth’s energy budget. When the incoming energy is greater than the outgoing energy, the earth’s energy budget is positive and the climate system is warming. If more energy goes out, the energy budget is negative and earth experiences cooling. As this energy moves through Earth’s climate system, it creates Earth’s weather and long-term averages of weather are called “climate”. Changes in the long term average are called “climate change”. Such changes can be the result of “internal variability” when natural processes inherent to the various parts of the climate system alter Earth’s energy budget. Examples include cyclical ocean patterns such as the well-known El Niño–Southern Oscillation and less familiar Pacific decadal oscillation and Atlantic multidecadal oscillation. It can also result from “external forcing” when events outside of the climate system’s five parts nonetheless produce changes within the system. Examples include changes in solar output and volcanism.
Deadline: 30 August 2019

All cartoons will publish as a digital catalog.

What do you think?