Robert John Downey Jr. is an American actor, producer, and singer. His career has been characterized by critical and popular success in his youth, followed by a period of substance abuse and legal troubles, before a resurgence of commercial success in middle age. 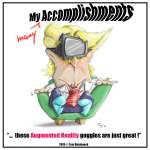