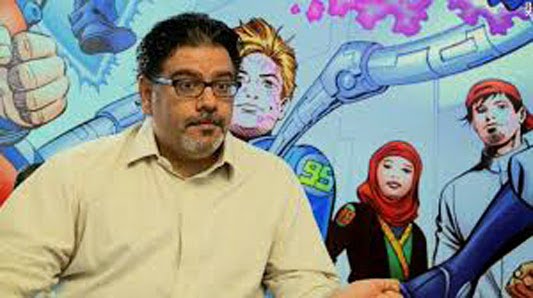 Cartoon Innovator Target of ISIS Death Threats: A death sentence has been pronounced via Twitter for Kuwaiti-born comic-book innovator Naif Al-Mutawa by the jihadist militant group ISIS (also known as.ISIL), according to reports out of the Middle East.

Dr. Al-Mutawa, whose groundbreaking comic THE 99 has sought to give the Muslim community its own superheroes while at the same time fostering a greater, more positive understanding of Islam among non-Muslim readers, is no stranger to criticism.

Though he created THE 99 — whose gaggle of protagonists are each inspired by one of the 99 attributes of Allah as delineated in the Quran — in consultation with Sharia scholars, there have always been some fundamentalists within Islam unhappy with the project, as well as fundamentalists outside of Islam threatened by the comic’s positive portrayal of Muslims in western mass media.

His creation has also been widely celebrated.   Since THE 99’s debut in 2006, Al-Mutawa has been listed among the world’s 500 Most Influential Muslims in the World by Jordan’s Royal Islamic Strategic Studies Center and named, alongside Steve Jobs, as one of the seven most influential designers in the world by Forbes China.  He has been singled out by U.S. President Barack Obama at a Summit of Entrepreneurship, presented Ted Talks about his comic creation, and been profiled on a PBS-aired documentary Wham! Blam! Islam! – while his superheroes have inspired the Middle East’s first theme park, joined forces with Superman, Batman and the Justice League of America in a comics crossover, and starred in two seasons of an animated series broadcast in 70 countries — from Turkey to Tahiti, Ireland to Iraq.

The militant group threatening Al-Mutawa, ISIS, has been noted for its enthusiastic use of social media, posting execution photos, beheading videos, battle updates, and pictures of kittens with machine guns to Instagram, Facebook, YouTube, and Twitter.  “These guys are so busy promoting themselves online,” Foreign Policy Research Institute terrorist expert Clint Watts has told mashable, “you’d think they were Justin Bieber.”

According to writer J.M. Berger in The Atlantic magazine: “One of ISIS’s more successful ventures is an Arabic-language Twitter app called The Dawn of Glad Tidings, or just Dawn.  The app, an official ISIS product promoted by its top users, is advertised as a way to keep up on the latest news about the jihadi group.”

Comic-creator Al-Mutawa has responded to the threats in an interview with Kuwait’s Al Watan newspaper, saying he plans to take legal action against those calling for his death via social media — adding, in his own tweet: “My work has glorified Islam from the U.S. to China for the past ten years. 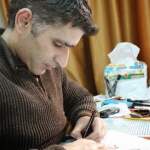 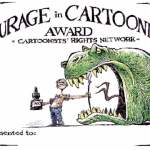