CRNI defends the creative and human rights of cartoonists under threat throughout the world.

For almost 25 years CRNI has been defending the creative freedom and human rights of political cartoonists under threat throughout the world.

CRNI is on the front lines of free speech.  Ali Farzat’s hands were broken by agents of the Syrian government — for drawing cartoons critical of President Bashar al-Assad.  Majda Shaheen’s life and safety were threatened — for drawing cartoons critical of Palestinian politics.  In many parts of the world, editorial cartoons are the most widely read and remembered opinion pieces in the popular press. As a result, editorial cartoonists like Farzat are frequently the first journalists targeted by extremists, thugs, and tyrants.
Working with our global network of over 600 cartoonists, CRNI diligently monitors threats and abuses against editorial cartoonists ranging from censorship, fines, and penalties, and physical intimidation (including of family members), to assault, imprisonment, disappearance, and execution.

We stand by those at risk, bringing international pressure on their persecutors by mounting campaigns for their just treatment, among the public at large and within the diplomatic community; as well as reaching out to heads of state and ministries, and coordinating joint actions with other organizations that promote free expression.
Nous sommes tous Charlie,  Nous sommes tous Kanika,  Nous sommes tous Rayma,  Nous Sommes tous Mohammad.  To date, our efforts have directly impacted the freedom and well-being of editorial cartoonists in close to 50 countries — like Kanika Mishra who took on the issue of India’s cultural challenges with rape and violence against women, and herself became a target of threats,  Rayma Suprani in Venezuela who was censored out of a job, Musa Kart in Turkey who faced a decade in prison for a cartoon about his country’s president, Mohammad Saba’aneh in Palestine who was imprisoned by Israel and who now faces a government inquiry in his own country because of his cartoons.
CRNI is seeking to raise $40,000 to enhance operations. Since its inception, CRNI has operated with a single paid staff and dedicated volunteers. As the needs have grown to assist cartoonists at risk, CRNI must grow with those needs. The funds will be used to expand our work and better utilize social networks and more quickly and effectively respond to cartoonists who are threatened. With that, we can move to increase our support systems and our financial position and establish dedicated efforts to helping those cartoonists most vulnerable and at-risk.
Please take a look at some of what is offered as our appreciated for your generous contributions.
Contributing Cartoonists:
Aislin (Montreal Gazette), Nick Anderson (Houston Chronicle), Pat Bagley (SLC Tribune), Barry Blitt (The New Yorker), Matt Bors (The Nib), Steve Brodner (The Nation), Michael de Adder (Artizans),Jeff Danziger (New York Times Syndicate), Matt Davies (New York Newsday), Susan Dewar (Toronto Sun), KAL (The Economist), Bruce Mackinnon (Halifax Chronicle Herald), Dan Murphy (Artizans),, Jack Ohman (Sacramento Bee), Joel Pett (Lexington Herald-Leader), Michael Ramirez (Investor’s Business Daily), Rob Rogers (Pittsburgh Post Gazette), Jen Sorensen, Ann Telnaes (Washington Post), Tom Tomorrow, Tom Toles (Washington Post),  Signe Wilkinson ( Philadelphia Daily News), Matt Wuerker (Politico), Adam Zyglis (Buffalo News)
SEE GALLERY FOR IMAGES CRNI is a nonpartisan organization. We do not take a position on the political opinions of cartoonists.  We advocate for the free exchange of ideas, for the rights of each individual to have and to express opinions, and for the public’s right to access the work of these courageous, committed, and gifted journalists and artists. 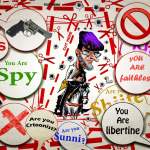 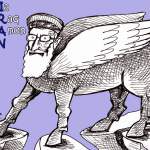