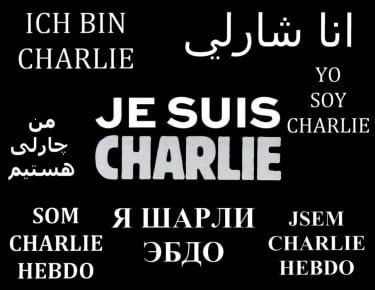 The staff and Board of Directors of Cartoonists Rights Network International (CRNI) are horrified by the attack against the French satirical newspaper Charlie Hebdo. Our hearts and thoughts are with the survivors and the families of those whose lives were taken in this senseless act of weakness.
Around 12 noon in Paris, at least three gunmen attacked the offices of the well-known and highly controversial satirical cartoon newspaper Charlie Hebdo. Famous for its satirical cartoons often making fun of religious leaders of all persuasions, their offices had been fire-bombed in 2011, then without any injuries to the staff.
Drew Rougier-Chapman interviewed editor Stéphane “Charb” Charbonnier for CRNI some months after that bomb attack in 2011. Charb is reported to be one of those killed. Five cartoonists were killed in this attack —  Charb, Cabu, Wolinski, Tignous and Honoré.
Militant Jihadists were credited with the 2011 attack and are credited with the attack in Paris today which has left 12 dead and four wounded.
CRNI stands with all people who revere free speech and democracy against this shameful and futile act of violence. The gunmen chose a moment when the staff were apparently all together in a planning meeting. Reports say that stronger police protection had been in place but was reduced the number of weeks ago.
CNN reporter Christiana Amanpour is quoted as saying that this attack “Will send a chill around Western democracies” and is an attack directly against freedom of speech.
CRNI encourages political cartoonists of all stripes and political persuasions all over the world to make their opinions about free speech and this particular attack known. We encourage the world’s press to show their support for free speech by republishing the very cartoons that caused this attack.
Dr Robert Russell, Executive Director of CRNI was quoted as saying, “Cartoonists are among the first people targeted by extremists and fundamentalists for poking fun at the sacred cows of our societies. Humour and satire are tools that close-minded extremists have little defence against except by the use of weapons and murder.”
CRNI and other institutions of free speech will strive to defend, monitor and protect cartoonists all over the world as they choose to exercise their rights to express themselves freely, openly and without submitting to fear.
We are in awe at the courage of the French cartoonists at Charlie Hebdo, we look forward to the next issue, and admire the society and environment that promotes this level of free speech. They are our heroes.
For more information contact:
Dr Robert Russell
Executive Director
Cartoonists Rights Network International CRNI
[email protected]
Visit also: http://cartoonistsrights.org/crni-statement-on-the-charlie-hebdo-attack/
0
SHARES
ShareTweet
Pin 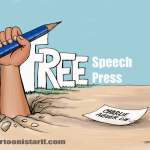 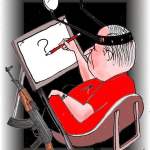