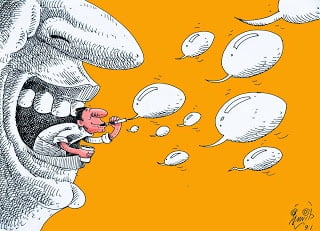 Definitions of Cartoon: A cartoon is a type of illustration, possibly animated, typically in a non-realistic or semi-realistic style. The specific meaning has evolved over time, but the modern usage usually refers to either: an image or series of images intended for satire, caricature, or humor; or a motion picture that relies on a sequence of illustrations for its animation. Someone who creates cartoons in the first sense is called a cartoonist, and in the second sense, they are usually called an animator.

Visit cartoon at Toons Mag or keep reading the meaning and definitions of Cartoon.

The concept originated in the Middle Ages, and first described a preparatory drawing for a piece of art, such as a painting, fresco, tapestry, or stained glass window. In the 19th century, beginning in Punch magazine in 1843, cartoon came to refer – ironically at first – to humorous illustrations in magazines and newspapers. In the early 20th century, it began to refer to animated films that resembled print cartoons.

A political cartoon, a type of editorial cartoon, is a graphic with caricatures of public figures, expressing the artist’s opinion. An artist who writes and draws such images is known as an editorial cartoonist. They typically combine artistic skill, hyperbole, and satire in order to question authority and draw attention to corruption, political violence, and other social ills. Developed in England in the latter part of the 18th century, James Gillray was a pioneer of the political cartoon, although he and others in the flourishing English industry were sold as individual prints in print shops.

Founded in 1841, the British periodical Punch appropriated the term cartoon to refer to its political cartoons, which led to the term’s widespread use.

Political cartoons are like illustrated editorial that serve visual commentaries on political events. They offer subtle criticism which is cleverly quoted with humor and satire to the extent that the criticized does not get embittered. The pictorial satire of William Hogarth is regarded as a precursor to the development of political cartoons in 18th century England. George Townshend produced some of the first overtly political cartoons and caricatures in the 1750s.

The medium began to develop in the latter part of the 18th century under the direction of its great exponents, James Gillray, and Thomas Rowlandson, both from London. Gillray explored the use of the medium for lampooning and caricature and has been referred to as the father of the political cartoon. 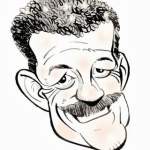 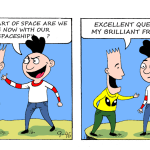