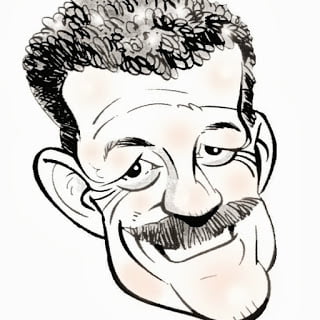 Mark Lynch, Australian cartoonist was born sometime during the last century. He was mistakenly thought to be a war baby as his parents began fighting soon after setting eyes on him.

Leaving school at the age of 15 after a strong recommendation from the Marist Brothers, he held down several jobs (some for up until a month at a time) before winning his first lottery at the age of 20, which allowed him to wear khaki clothing and shoulder a rifle. The common name at the time for this indentured servitude was, National Service!

After doing his time in ‘Nam, (Nambucca Heads) he became a Qantas Flight attendant, and for the next 19 years, his life resembled an exotic beer commercial set in a variety of worldwide locations.

In what doctors now diagnose as a brain explosion, he bought a restaurant in Paddington, Sydney, which he ran for ten years.

This allowed him to develop an allergy towards real work and became a cartoonist, where he was able to hide behind his pen (and a series of aliases and avatars) and poke fun at those less fortunate than him. This disguise enabled him to take the mickey out of politicians of all persuasions during his time as an Editorial cartoonist for ’The Australian ’Newspaper.

A songwriting partnership with Keith Potger, of, ‘The Seekers’ produced, ‘A Friend like you’ recorded by Canadian singer John McDermott, and still sung in his live performances to this day.

He is the recipient of 51 International and Australian cartooning awards including, National cartoon of the year, (twice) Stanley award for the best single gag artist of the year as well as his comic, ‘Clancy’ winning best comic strip 4 times and ‘GEN WHY’ once. Most recently he was the recipient of the 2015 Bronze Hat award and the peoples choice award at the 2015 Knokke-Heist cartoon awards. (Belgium)

It has been widely suggested that the above results were achieved by Lynch sleeping with various members of the judging panels and their pets.

Mark’s cartoons appear in a variety of forms and diversity worldwide, including the USA, UK, Canada, Australia, South Africa and on video screens in the Berlin subway system, where they are seen by 1.5 million passengers a day. (And now in Munich)

Now living in Sydney, Australia, Mark Lynch lives in a virtual reality world with apps such as a mortgage and school fees. 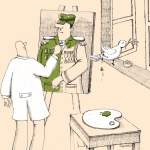 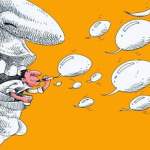