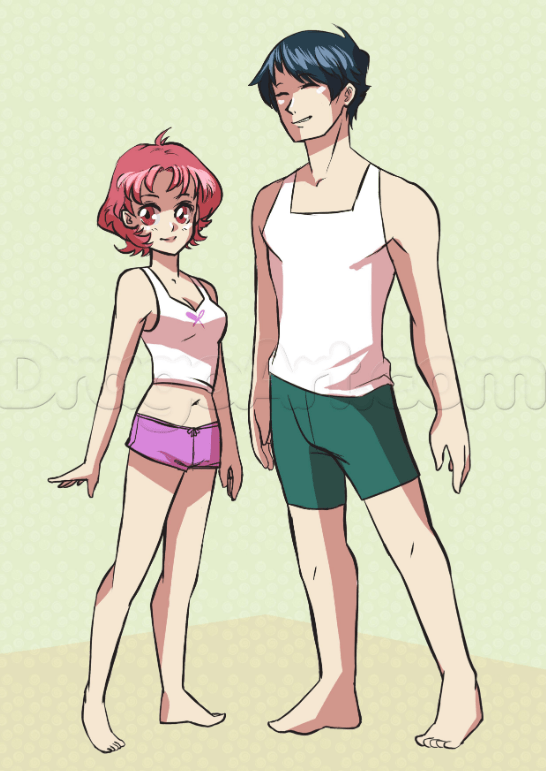 In anime anatomy, on average, guys are a full head taller than girls. Girls will be about 6 heads tall and guys will be about 7. When drawing anything relating to anatomy, height is measured in heads. Ahead is exactly what it sounds like. It is the measurement of the top of the head to the chin. Just because someone has more heads, doesn’t always mean they will be taller or larger though and it will differ from person to person. It all depends on the size of the head. Female heads tend to be rounder in anime, with big eyes and a little mouth. Male heads are normally longer with narrower eyes, strong jaws and a wider mouth. A girl’s ribcage is usually smaller and a bit narrower than a guy’s. A girl’s torso also comes in more where the rib cage ends, creating the waist. The waist on guys isn’t nearly as prominent and their torsos generally just some straight down. Girls have breasts which are made up of fatty tissue and hang on the chest. Men generally have pecks that are firm and made of muscle. Female hips are wide and don’t come up very high. Also, female legs are thinner and leaner then male legs. Men’s hips come up higher and their legs are broader and more muscular. Similar rules go for the arms. Girls have thinner arms and guys have broader and more muscular arms. Hands and feet are actually quite similar in makeup and have similarly named bones. The types of bones in feet are metatarsals and tarsals. The bones in the hands are metacarpals and carpals. The meta bones make up the bones of the ankles and heel in the foot and the bones of the wrist and palm in the hand. Girl’s hands are dainty, as are their feet. Their fingers are thin and their feet are narrow. Guy’s hands are broad with thick fingers. Their feet are also wide and a bit heavy. Now we’ll put those tips to good use. We’ll draw a base for a female body.

And then we’ll draw a taller base for a male body, much taller than the other one. We’re going to work from head to toe, just focusing on the anatomy, smaller details like faces and hair will come later. We’ll draw the shape of the girl’s face first as well as her neck. Then we’ll go over and do the same for the guy, drawing in the shape of his face, jaw, and neck. From there we will draw their shoulders and their chests. The guy’s shoulders will be broader than the girls. The girl’s chest will slope out a bit for her breasts and simple lines on each of them will show where the shoulder, chest, and arm all join together. Now for the rest of their torsos. The girl’s back arches a bit, pushing her chest out forward a bit. The guy’s back doesn’t arch nearly as much and doesn’t have as much curve either. Arms are up next. The guy’s arms are long and hang by his sides. The girl’s arms aren’t nearly as long as his, one hand flared out a little bit. From there we’ll move to the legs and hips. As I said earlier the girls will be thinner and the guys will be broader. The same goes for their calves. The girl’s feet will be small and the guys will be broad and long. Now we’ll start adding in the other details now that the anatomy part of this is through. Let’s put them in a couple of tank tops so they’re not going around naked. Let’s give the girl a cute curly haircut. We’re just going to draw the shape of the hair here. We’ll also go ahead and outline the guy’s hair, giving him a choppy messy hairstyle. Since we’re already over here, we’ll draw in his ear and the rest of his details in his hair. And go back over to the girl and draw in the rest of her hair and her ear. We’ll draw in her face; big eyes and a small mouth. Then we’ll give the guy a little smirk. And that is how you draw anime people. Try different things and don’t forget to share. 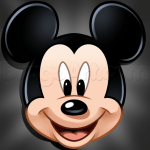 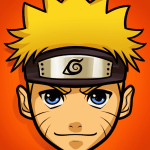