How to Draw Female Figures?

This is an easy and step by step drawing tutorial, follow the steps and learn to draw Female Bodies. Let’s Start!

Firstly, here a female face, that you can see, that the women’s body is full of the arc and soft lines. From the face shape to the eyebrows’ form too! Now, as the faces, here a little tip, that how do you draw females in other and other ages as children (1) or teenagers (2) or adult woman (3) or an old woman (4. Just a little example for your help!

Eyes are really important on a woman because they can be blameless (2), or guilty (3), or womanly (4), or childish, that your choice, that which one better for your female figure.

And now, some tips and tricks for the hairstyle. As you can see, the woman’s hair has a lot of arcs and softly lines too! And as on the face and the hair, I would like to show for you, that a woman’s body has a lot of arc lines and softly lines too, their whole body has this line. Now, see the next step!

As you can see in the previous step you can see the female anatomy well. Now here some body-type as not everyone has the same body. Usually, the breasts and the hips part are having the same width, but here more body-type of the woman. Some woman’s hips are bigger than her breasts, some woman’s boobs are bigger than her hips, or have a boyish body, it always depends on her genetics too.

The perspective is important too when you would like to draw your female figure because it’s not okay if you don’t know, what will be bigger and smaller in a view. Here some tips! And as the last trick, here some examples poses for the female characters. As their body, their movements are softly too! If you want to see the more womanly pose, see the pinups picture! We are here in the “How to Draw female figures” part! Firstly, draw the baselines of the figure.

Now draw the eyes with her eyebrows. As you can see her face in a side view, you can draw it more easily!

Now draw the little details on her face, like her mouth, or for her nose, and finish her eyes too!

Draw the next bigger part, so the base form of her long hair!

Draw the little details on her hair, now you can see a lot of soft lines!

And now draw the base form of her arms. (As her arms are the frame of her back, you don’t need to separate them from each other!)

Draw the little details on her back, and her arms, and fingers! It’s a little harder part, but not too difficult!

And now, draw her clothes’ base form!

After this, draw the details, lines on her clothes!

And now, the last bigger part, draw the base form of her legs!

As the part step, draw the separate lines of the legs, now you can see both of them well!

And this is the end of the “How to Draw female figure” tutorial! I really enjoy drawing this tutorial with you, guys, and I hope, you like it too. Now, the only thing, what you need, to go, and color your own female figure! Good work, guys! 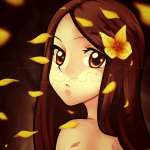 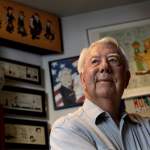