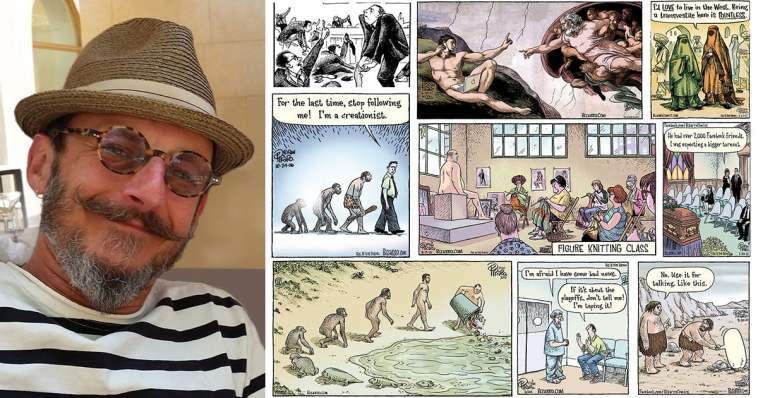 Dan Piraro is an American syndicated cartoonist, he writing and drawing seven cartoons per week for syndication in over 350 newspapers. This is an exclusive interview with Toons Mag.

Arifur Rahman: First of all, we want to know about you, and we are very excited to know your stories. Dan: Dan Piraro, age 60, raised in the U.S. in Oklahoma and Texas, later lived in New York, Los Angeles, and Dallas. Currently living in central Mexico for the past three years. I became a syndicated cartoonist with my feature “Bizarro” in 1985. For 33 years, I wrote and drew 7 cartoons per week for syndication in over 350 newspapers. Since my semi-retirement on Jan 1, 2018, I now write/draw one cartoon per week, published on Sundays, and have hired a longtime colleague (Wayno) to write/draw the Monday through Saturday cartoons.

Arifur Rahman: What was the first cartoon that gave you recognition?
Dan: The first cartoon I published was a fairly silly pun about “The New York Stock Exchange”. I can’t say it got me recognition, per se, but people seemed to like it.

Arifur Rahman: When did you decide that you want to become a cartoonist and why?
Dan: In my early twenties (the early 1980s) I was looking for a way to make a living as an artist. An opportunity arose to get into commercial illustration, mostly doing realistic drawings and paintings of food products and the like. While I preferred it over a non-art-related job and the money was pretty good, I came to dislike the routine of it and was desperate to find a more creative way to make a living. I would sometimes draw cartoons to amuse myself at work and my coworkers at the time really enjoyed them and encouraged me to seek publication. After about three years of submitting my comics to newspaper syndication companies, I managed to attract the attention of a small company called Chronicle Features, the same syndicate that had given Gary Larson his start five years before. They offered me a contract in 1985 and syndication began. It was still another ten years before I could afford to give up commercial illustration, however.

Arifur Rahman: Which genres of cartoons you like to draw?
Dan: My favorite are one-panel cartoons of a surreal nature.

Arifur Rahman: According to you, what are some of the main qualities that a cartoonist should possess?
Dan: The usual stuff: creativity, self-discipline, humor, intelligence, education, strong opinions, an open mind, an inquiring mind.

Arifur Rahman: Why should anyone choose this as a Profession?
Dan: Do it only because you love it. It is unreasonable to assume you’ll ever make enough money from it to call it “a living”.

Arifur Rahman: Is the Profession of cartoonist can bring enough financial stability along with fame?
Dan: Back before the Internet, it was possible to make a living as a cartoonist but was still a very long shot. Much like being in a band and hoping to get rich and famous; lots of bands, very few get rich. Now, since everything is posted on the Internet for free and newspapers and magazines are failing financially, it is almost impossible to make a living as a cartoonist. Even cartoonists who are very popular online make very little money from it. The web has done similar things to musicians; they can no longer make money selling their songs so they have to tour constantly. The internet has been both very good and very bad for creative types.

Arifur Rahman: What is the biggest achievement you think that you earned in your career?
Dan: My favorite thing about my career is that twice I’ve been a clue on Jeopardy! (A super popular game show on American TV) I’ve long been a big fan so that was a huge thrill. I was also once a clue on a New York Times Crossword Puzzle. I thought that was really cool, too. I’ve won some awards from the cartoon industry but don’t have a lot of respect for those kinds of things.

Arifur Rahman: From your point of view, what are the social liabilities of a cartoonist?
Dan: I don’t know of any. When people find out I’m a cartoonist, they’re usually fascinated and want to know more about me. One big downside is that I never got health insurance through my job and that can be financially devastating in the U.S., but that’s a reflection of the utterly corrupt and criminal health care system in the U.S. more than anything else. I now live in Mexico where state-of-the-art medical services are available at rates a person with a decent job can well afford. Catastrophic insurance is also much more inexpensive here.

Arifur Rahman: Who is your favorite cartoonist?
Dan: In college, my first exposure to Kliban’s book, “Never Eat Anything Bigger Than Your Head and Other Stories,” inspired me to want to be a cartoonist. His work is still at the top of my list, along with Quino’s wordless cartoons, which are perhaps the most brilliant I’ve ever seen. I also enjoy many of the classic gag cartoonists from The New Yorker, National Lampoon and other magazines.

“Never Eat Anything Bigger Than Your Head and Other Stories”

Arifur Rahman: The difference that you want to see in the cartoons after 10 years from now on?
Dan: I’ve often lamented the terrible artwork in American newspaper cartoons. I’d like to see good art become popular again in the U.S., the way it has always been in Europe. I don’t expect that to happen, though. I’d also like to see people be able to make a living as cartoonists once again. I don’t think that will happen anytime soon, either.

Arifur Rahman: Do you still enjoy your work like the way you used to in some years ago?
Dan: Doing anything every day for 33 years can be trying but I do still mostly enjoy it. Since my semi-retirement in 2018, I’ve been spending most of my creative time on fine art: watercolor and oil paintings. I had a gallery show a few months ago here in Mexico and continue to sell and exhibit my work online at diegopiraro.com and on Instagram here: @diegopiraro Diego Piraro is how I sign the non-cartoon art that I’ve done since moving to Mexico.

Arifur Rahman: Difference between old and new generations cartoons?
Dan: Hard to say. There have always been funny cartoonists and boring cartoonists. I think the idea that one does not need to be able to draw at all to be a successful cartoonist is fairly recent. The online comic, “The Oatmeal,” is a perfect example. I don’t argue that cartoons with bad or naive art aren’t funny or worth reading, only that they aren’t fun to look at. I liken it to a song with a great melody but crappy lyrics or a song with lyrics you love but lousy musicianship. In my opinion, when both things are good, the product is exponentially better.

Arifur Rahman: Any suggestions that you would like to share with our new cartoonist?
Dan: As in all aspects of life, enjoy the journey; there is no destination. If you’re not digging it when you’re not getting paid, you won’t enjoy it when you are. 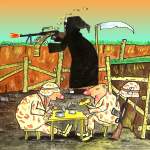 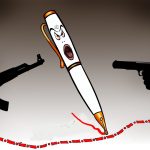