Manuel José de Araújo Porto-Alegre, Baron of Santo Ângelo was born on November 29, 1806, and died on December 30, 1879. He was a Brazilian Romantic writer, painter, architect, diplomat, and professor, considered to be one of the first Brazilian editorial cartoonists ever. He is the patron of the 32nd chair of the Brazilian Academy of Letters. 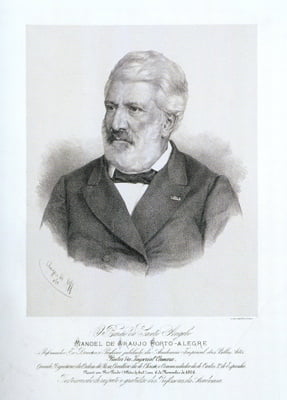 In 1826, he moved to Rio de Janeiro, to study painting with Jean-Baptiste Debret at the Escola Nacional de Belas Artes (at the time called the Academia Imperial de Belas Artes). He also studied at what is now the Academia Militar das Agulhas Negras and took a Medicine course and Philosophy. In 1831, he left Brazil along with Debret to Europe, to improve his painting techniques. In 1835, he went to Italy, where he met Gonçalves de Magalhães, another Brazilian poet. He and Magalhães would create in France, in the year of 1837, a short-lived magazine named Niterói, alongside Francisco de Sales Torres Homem. Also in 1837, he becomes a history painting teacher at the Escola Nacional de Belas Artes, in a post that would last until 1848, when he would become a drawing teacher at the Academia Militar das Agulhas Negras, and starts doing his first caricatures. In 1838, he married Ana Paulina Delamare, having with her two children: Carlota Porto-Alegre (the future wife of painter Pedro Américo)and future diplomat Paulo Porto-Alegre.

in 1840 he is named the official painter and decorator of Emperor Pedro II’s palace. He decorated the imperial palace in Petrópolis, the wedding of Pedro II with Teresa Cristina of the Two Sicilies and the aforementioned emperor’s coronation. He was decorated with the Order of Christ and the Order of the Rose. The coat of arms of the Baronage of Santo Ângelo, the same worn by the Araújo family reuniting with Gonçalves de Magalhães and Torres Homem, he founded a periodic named Minerva Brasiliense, which lasted from 1843 to 1845. 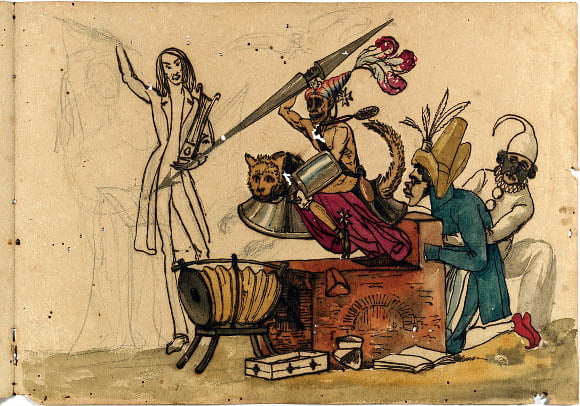 He would publish in this periodic his poem Brasiliana. In 1844, alongside Torres Homem, he founded the humoristic magazine Lanterna Mágica, where he published his caricatures. In 1849, Porto-Alegre founded the magazine Guanabara, alongside Joaquim Manuel de Macedo and Gonçalves Dias. The magazine, considered the official journal of the Romantic movement in Brazil, lasted until 1856.

In 1852, he enters the political career, assuming a position as a substitute councilman in the Municipal Chamber of Rio de Janeiro, lending service in the areas of urbanism and public health. He would exercise this post until 1854, the year when he became the headmaster of the Escola Nacional de Belas Artes, lasting until 1857. In 1860, Porto-Alegre entered the diplomatic career, where he served as the consul of Brazil in the Kingdom of Prussia, in the Kingdom of Saxony and later in Portugal, where he died. (Porto-Alegre’s remains were brought to Brazil in 1922.) He was proclaimed Baron of Santo Ângelo by Emperor Pedro II in 1874 and was a member of the Brazilian Historic and Geographic Institute.

While in Dresden in 1865, Porto-Alegre wrote a letter to Joaquim Manuel de Macedo,then-tutor of Princess Isabel’s children, in which he reveals that he became a Spiritist and was able to psychographic messages from the Underworld, and Isabel would ask him “who was [her] guardian spirit”. The letter, now being kept at the Brazilian National Archives, has 12 pages. 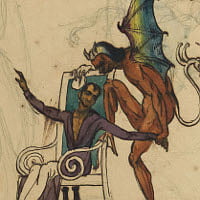 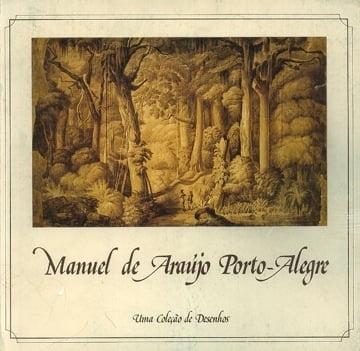