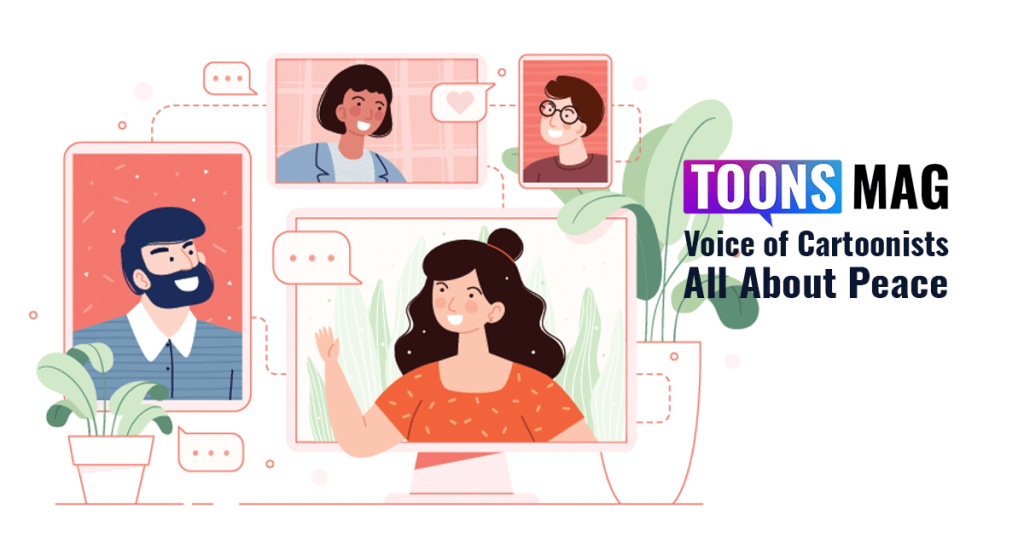 The Voice of Cartoonists, All About Peace

Welcome to the Voice of Cartoonist‘s first article. We have asked some of our cartoonist friends, say a few words about peace. I have asked them because they were recently nominated for Cartoonist of the Year 2019, and the theme of Cartoonist of the Year 2019 was Peace. This is an open article anyone can participate If you think you have something to say about peace. You are welcome to express your opinion below. The questions are, “From your perspective, What is peace? How can we build a peaceful world through cartoons?  Is it possible?”

Peace according to me can be viewed at three different levels-personal, societal or national and finally at a macro scale i.e international. And though the underlying definition in all three cases is the same, it’s interesting to study each individually.

On a personal level, I think it’s quite safe to assume it’s relative and subjective in nature as also more intimate. What I perceive and comprehend as peace may not be good enough for another. Also how much priority one gives to this abstract sentiment may also vary from person to person. Peace at a personal level is the perceptions we nurture to the challenges and conflicts we encounter in our day to day life and how best we resolve the same. Coping skills play an important role to ensure one’s peace is assured. It’s a learned behavior. I personally seek peace in my work and interpersonal relations, by introspection, doodling,  writing my thoughts as also embracing music and breathing exercises so that I can sustain my personal peace.

In the case of societal peace, the role of the policymakers, the judiciary and the mode of policing cannot be undermined. Democratic expression of the masses is to be respected. A sensitive government and moreover transparent governance, ensure societies enjoy peace. Inequality, inequity, injustice can crumble peace and ruin the lives of members of society which again takes a toll. Unity, commitment and a strong sense of accountability ensure there is peace in society. We see very few such societies that enjoy this privilege, by and large, each society has multiple issues be it economical, social, political or environmental to resolve. And yet, all is not lost, there is hope. Much can be learned in terms of best practices from some of the Scandinavian countries.

At an international level, the issues magnify and multiply unleashing unwarranted pain and deaths. World Wars, Cold wars, Trade wars, Cyberwars hold mankind at ransom. In the name of religion, control on resources and power politics see innocent lives sacrificed. The major casualty is women and children who are reduced to pawns. One agitated mind, one flawed policy and one inflated ego in an international arena can ruin and wipe out traces of civilizations, culture, and faith. History is the testimony. We definitely need to learn from past mistakes, surely, our future generations deserve a much better and peaceful life.

It’s time, we as rational human beings pay attention to the fact and redefine our priorities and way of life. Acknowledge the fact that maximum harm is done by our selfish, narcissist approach. I would conclude with the thought of Mahatma Gandhi, “The day the power of love overrules the love of power, the world will know peace.”

Peace implies societal tranquility in which safety, justice, and freedom, through the cooperation of individuals, are achieved. The aim of peace is to illuminate all aspects of violence in the community. Peace consists of three basic elements: safety, justice and freedom, though, each has its specific concept. The hope for world peace by a cartoon: I think in recent times, achieving peace through satirical work such as cartoons, has seen progress in the developed world. In the third world, however, conservatism, backward traditions, tribalism, and illiteracy are the main obstacles in the effectiveness of this art. Therefore, in such societies, it is very difficult to question and criticize the actions of politicians in order to establish the art of cartoons.

For me, peace is a less complicated world, with less economic and commercial interests, with less religious and cultural beliefs, with fewer borders between countries. Reach peace with cartoons. I think it's a utopia, I don't think it can be, what I do believe is that we can show the path of peace through our drawings, pointing out everything that is not close to peace, hunger, war, harassment, abuse, exploitation. etc.

Mother is a very good example of life. A mother's love is very great. The mother does not need the payment for love and love. Mother is very availed to all her children and loves them all. There are no other groups, communities, races, organizations, parties, and traditions. All are one. From that arises a sense of peace. The peace that cannot be replaced by anything, anything more with money. Mother's sweat, tears, and also the size of your heart, for me it's great. I am very sure, mother's love always gives peace to the family. We all have mothers. And the great love of a mother. For me, the ocean as ink, it might not be enough to write down mother's love.

World peace is an idea of freedom, peace, and happiness for all countries. World peace crosses borders through human rights, technology, economics, education, engineering, medicine, diplomats and/or ending all forms of conflict. Since 1945, the United Nations and its 5 permanent members of the Security Assembly (US, Russia, China, France, and the United Kingdom) have worked to resolve conflicts without war or declaration of war. However, countries have entered a number of military conflicts since that time.

The philosopher Jiddu Krishnamurti states that people who divide people up based on faith, nationality, and tradition are perpetrators of violence.

I totally agree with the wise words from Jiddu Krishnamurti. Indeed, the onset of violence is due to a group of people who separate themselves or their groups from other humans. Those who separate it have been influenced by their thoughts and egos, so they are unknowingly giving birth to violence.

The occurrence of conflict, violence, and war in the universe is only caused by each human being separating from other human beings. They form groups, communities, countries, mass organizations, parties and other traditions in a crowd. Yet every crowd and so on, reflect exclusivity. Every exclusive one that in my opinion becomes a symbol of arrogance and feels the most everything.

Such things are simply and clearly witnessed in our daily lives. Each group and the other crowds, always spit out their own egos and passions. That is what causes chaos everywhere. Event after event repeated continuously in every human civilization from time to time.

As long as human beings on this earth maintain mutual diversity, so long as it is also in this Universe there can be no peace. Because all humans are competing to emerge victoriously. There is competition from one crowd with another, so there will always be negative energy that will result in endless feuds. That's what we see in life today.

A Danish proverb says "Peace produces, war destroys", without peace the human being will self-destruct, unfortunately today some powerful Countries which brag about human rights do it on purpose and work to start wars Civilians in third world countries with wealth like Oil and Gas and raw materials to sell weapons, and to grab their wealth like Iraq and Syria ... But these powerful countries are not  immune to revenge attacks which he describes as terrorist attacks. these countries must reconsider all of this, maybe one day Peace will be prevail  . Youcef AIMEUR /Algeria