Today we are with Jarúl Ortega, a cartoonist from the Dominican Republic. He recently received the Cartoonist of the Year Award 2019. Now we will listen to his untold stories. Lets began.

Arifur Rahman: Please give a short introduction of yourself 😊

Jarúl: I was born in Santo Domingo in 1986. In 2008 I discovered the graphic humor of Bill Watterson And his work Calvin and Hobbes. I Fell in love and I wanted to do the same. Later in 2015, my cartoons began to be published on distant websites, both National and international, later, my humoristic pictures were published in several newspapers and magazines in different countries. For example, Acento (Dominican Republic) Diario16 (Spain) Ñ magazine (South Korea) Y magazine (Paraguay).

And currently, I publish for digital media of Somospueblo.com

Arif: What was the first cartoon that gave you recognition?

Jarúl: It is titled No more war and in fact, it is published on the ToonsMag.

Arif: When did you decide that you want to become a cartoonist and why?

Jarúl: When I realized that I could be a voice for those who don’t have it. Why? Because I think it’s necessary, raise your voice with our drawings.

Arif: Which genres of cartoons you like to draw?

Jarúl: Humor. Political Satire. Social criticism… and everything that leaves a message.

Arif: According to you, what are some of the main qualities that a cartoonist should possess?

Perseverance, To improve the practice of drawing, day after day.

Empathy, To be the voice of people, through his drawing.

Patience, To carry the cross of a work of little value, at least in my country, it is like that.

Arif: Tell some unique advantages of this profession of a cartoonist?

Arif: How were your school days? Did you ever feel that time for a once that you would choose this? Why should anyone choose this as a Profession?

Jarúl: My school days were wonderful. I always made drawings in class and got into trouble. As a child I wanted to be a Disney animator, I loved it and still love animation, which motivated me to draw at the beginning. Choosing this profession is difficult, at least in Latin America, I think so, but if you have a vocation, the desire leaves something in this world, and not just go through it for no purpose, this is your vocation.

Arif: What is the biggest achievement you think that you earned in your career?

Jarúl: There are two important achievements for me. The first is that I was recognized at the Autonomous University of Santo Domingo (UASD) for my artistic career. The second, I also received it in my country, in august of this year I obtained for the first time, the first place in a Graphic Humor contest. For me, it was very important that my art, be recognized in my land.

Arif: From your point of view, what are the social liabilities of a cartoonist?

Jarúl: Report everything that is wrong. Make fun of power. Laugh at everything and always leave in each drawing, a message that invites laughter, but also reflection.

Bill Watterson is a fantastic cartoonist. For me, is god.
Quino is the cartoonist for the excellence of all Spanish speakers. Beyond Mafalda, his work of humor is exceptional.
Manel Fontdevila, an Awesome political cartoonist, with a fantastic and impeccable drawing.
Diego Parés, He can do everything. He is unstoppable. From simple and wonderful graphic humor, such as Humor Petiso, to realistic satirical drawings like those he does for the magazine Barcelona in Argentina.
Angel Boligán, The perfect synthesis in the drawing. You can say a lot, just with his drawings, that seems incredible to me.

Arif: Do you still enjoy your work like the way you used to in some years ago?

Jarúl Ortega: Now I enjoy it more. 😃 I have a level drawing wich compared to previous years I can say that I have improved. By constant practice, the joke reached it easier. I am at the beginning of my best moment and I enjoy it very much.

Jarúl: There is not much. The message remains the same, the drawings criticize the same problems. The world is the one that hasn’t changed.

Jarúl: Yes. Don’t be afraid. Show your drawing, publish it, share it, let the world see it. Practice to improve, combine your references, and never, never, never, stop drawing believing that you are a bad cartoonist, your art can change the world.

Arif: Tell us a few sentences about Toons Mag. How can we make a better place for cartoonists?

Jarúl: Toonsmag is doing very well, they just need more support and dissemination to continue their excellent work. It is impressive and wonderful what they do!

Arif: How do you feel to become the winner of the Cartoonist of the year award 2019? Why most of the people voted for your cartoon, what do you think?

Jarúl: I received a lot of support from my country, it was impressive, we are a half-island, sometimes the world forgets us, but we are proud of us. Being the cartoonist of the year 2019 is like being a Miss Universe, that’s how I feel, with the crown, the dress and all the looks on me. 😊😀

Arif: What do you think about the Cartoonist of the year Award? Should we continue?

Jarúl: of course yes! It is an award that gives visibility to new artists! It would be mortal if you continue.

Arif: Italian cartoonist Marco De Angelis thinks, the idea of Jarúl Ortega’s cartoon “For Peace” is not original. Can you explain, where did you get the idea of your cartoon?

Jarúl: I do not understand the question and there is nothing to explain.
But if he considers that my work is not original, he is invited to present evidence, I have nothing to hide. What can I say about this? I am perplexed, I sat down to create the five works that I submitted to the contest. All the original ideas that I had to go around again and again on paper until I found them. I am surprised, I invite him, as I said before, to show evidence that my work is not original and that I look at my other works, not only those that I submitted to the contest but all my works. It’s the only thing I can say, magistrate!

Arif: Thank you, Jarúl Ortega, for your time. We wish you congratulate once again, good luck and success. Keep drawing and publishing on Toons Mag.😊 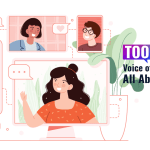 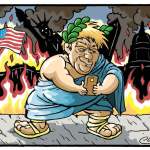