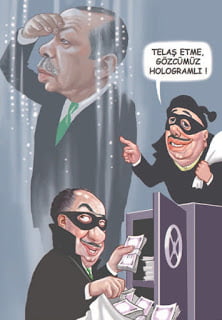 Turkish political cartoonist Musa Kart was recently acquitted of insulting his country’s president and former prime minister Recep Tayyip Erdoğan via a cartoon, but Kart says the repression of journalists in Turkey is only getting worse.

In February of this year, Kart criticized Erdoğan’s apparent role in a graft scandal and simultaneously mocked a speech that he gave via hologram at a party meeting. In the cartoon, Erdoğan’s digital doppelgänger stands by as one burglar counsels another: “Don’t rush, our watchman is a hologram.” In response, Erdoğan filed a criminal complaint against Kart which could have resulted in a prison sentence of nearly 10 years. This was not the first time Kart’s work ran afoul of Erdoğan’s sensibilities; in 2005 the cartoonist drew the prime minister as a cat tangled in a ball of string and was fined 5000 Turkish lira, although that verdict was later overturned. Erdoğan claimed that the cartoon caused him emotional distress.

After it was announced on October 21 that the latest indictment was proceeding, British cartoonist Martin Rowson started an online solidarity campaign inviting his colleagues around the world to share their own caricatures of Erdoğan. Rowson said although the campaign likely didn’t influence the court’s acquittal just a few days later, he nevertheless thought it was important for other cartoonists to support Kart: “I hope it gave Musa Kart a feeling that he wasn’t on his own in there. Basically, this is cartoonists playing the Spartacus card, because if one of us, anywhere, is persecuted for laughing at power, we all are.”

In court, Kart himself pointed out the absurdity of his situation:

“I think that we are inside a cartoon right now. Because I am in the suspect’s seat while charges were dropped against all the suspects [involved in two major graft scandals]. I need to say that this is funny.”

The cartoonist’s ordeal likely is not over yet, as he expects Erdoğan to appeal the acquittal. Meanwhile, other journalists and regular Turkish citizens are also finding their speech curtailed through intimidation, internet legislation, and restrictions on social media. Kart is not optimistic about the future of free expression in Turkey but he intends to keep drawing, since “I have always believed that cartoon humour is a very unique and effective way to express our ideas and to reach people and it contributes to a better and more tolerant world.” 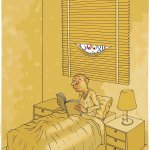