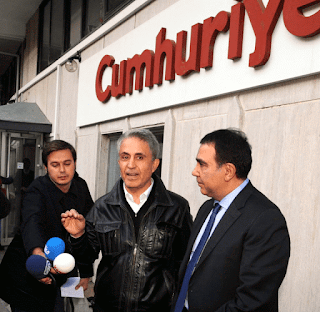 Political cartoonist Musa Kart was among more than a dozen staff members arrested in yet another raid on a Turkish media outlet yesterday, the latest development in a government crackdown on the press following a failed coup attempt by some members of the military in July. This time the target was Cumhuriyet, one of Turkey’s largest and oldest newspapers.

Kart, who also sits on Cumhuriyet’s board of directors, was arrested along with editor-in-chief Murat Sabuncu, several writers, and the paper’s in-house attorney. The arrestees have reportedly been barred from meeting with their own lawyers for the next five days. As in past raids like the one in August at Kurdish newspaper Özgür Gündem, President Recep Tayyip Erdoğan accuses the secular and left-leaningCumhuriyet of having unspecified ties to “terror organizations” including the Gulenists and the Kurdistan Workers Party (PKK). Both Turkish and international advocates for press freedom countered that the raids are all part of Erdoğan’s not-so-thinly-veiled plan for political domination; the International Press Institute issued a statement saying that “we are watching the complete extinguishment of press freedom in Turkey before our eyes.”

Kart, a longtime Erdoğan critic and the 2005 recipient of Cartoonists Rights Network International’s Courage Award, said that his home was searched by police at 5 a.m. yesterday. Before turning himself in for questioning, he gave an interview to reporters gathered outside Cumhuriyet’s offices:

This is a comedy. You cannot scare anyone with this sort of oppression. No person with a conscience can accept this picture. You cannot explain this to the world. I am being taken into custody just because I draw cartoons, exclusively because of cartoons. I think everyone will be able to put this in perspective. I’m not going to surrender… I have nothing to hide, no reason to run away… Everything I write and draw is out in the open.

Some of Kart’s colleagues suspect that the government may intend to seize control of the paper’s operations, as it did with the Feza Media Group in March even before the attempted coup. Columnist Ayşe Yıldırım said the staff will not let that happen without a fight, vowing that “We are not going to hand over Cumhuriyet, we are not going to allow them to assign a trustee. We will hold our heads high and continue our publication without fear.” 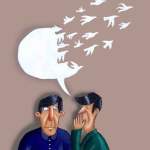 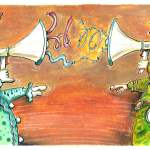