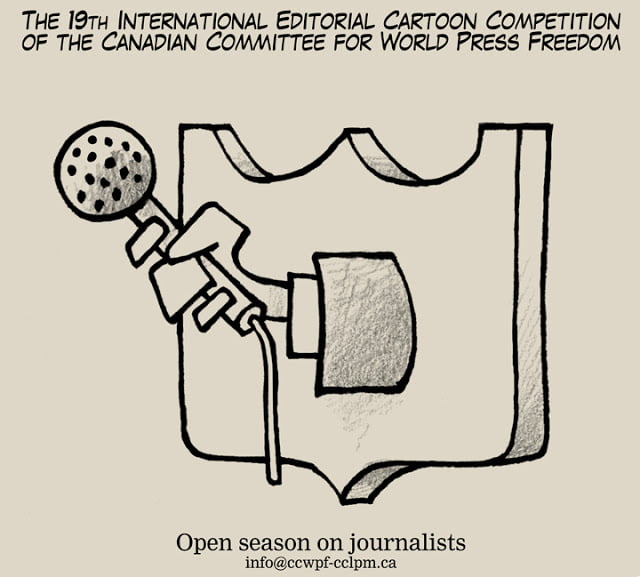 Here are the rules and regulations:

1. The theme for the 19th International Editorial Cartoon Competition is:

Open season on journalists 2018 was one of the worst years for the number of journalists killed while doing their work. In the annual report of Reporters Without Borders, 2018 was particularly deadly with 80 journalists killed in the line of duty (+ 8%). After three years of decline, the number of professional journalists assassinated is up 15%: 63 homicides, against 55 last year.  The highly publicized killing of Saudi columnist Jamal Khashoggi has highlighted the unrestrained determination of the enemies of press freedom.

2. Three prizes will be awarded: the first prize of $1500 plus a Certificate from Canadian UNESCO, a second prize of $750, and the third prize of $500. All sums are in Canadian dollars. Ten additional cartoons will receive an ‘Award of Excellence.’ Regrettably, no financial remuneration accompanies the Awards of Excellence.

3. Only one cartoon will be accepted from each cartoonist. It may be either in color or black and white and must not have won an award.

5. The name, address, telephone number, and a short biography of the cartoonist must be included in the submission.

6. The Canadian Committee for World Press Freedom shall have the right to use any of the cartoons entered for the promotion of the Editorial Cartoon Competition.

7. The winners of the Cartoon Competition will be announced at the World Press Freedom Day luncheon to be held at the National Arts Centre in Ottawa on Thursday, May 2, 2019, and will be advised by e-mail. The winner’s names and their cartoons will be posted on the CCWFP web site.

8. The winning cartoons will be published in a program distributed at the luncheon. The deadline for the reception of cartoons is midnight (Eastern Standard Time), Friday, April 12, 2019. 19th World Press Freedom International Editorial Cartoon Contest, Send submission by e-mail to [email protected] 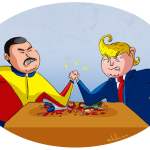 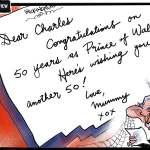