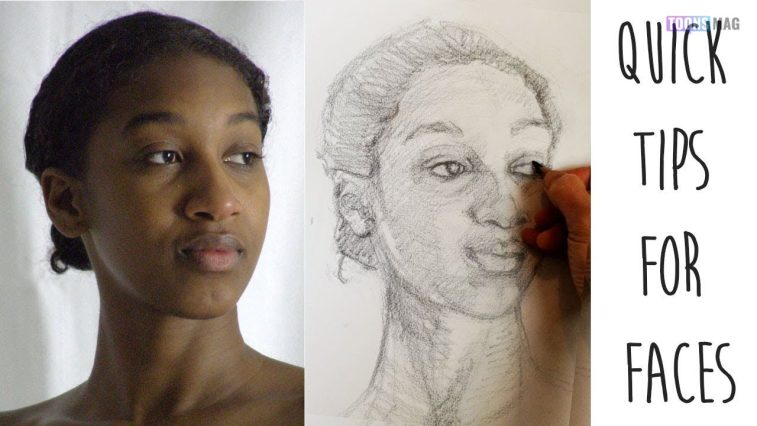 Face Drawing Tips: Everyone wants to draw better faces. Here are a few tips and guidelines to make your faces look more realistic and able to show more expression. You will also learn some tricks to draw more accurate portraits of yourself and your friends.

The first thing to remember is that the face is part of the head. The face makes up just a quarter of the head. To draw the head almost every artist starts by drawing an oval, and then they either visually measure or make a faint mark to indicate the halfway point of the oval lengthwise. That halfway mark, or centerline of the oval, is where the eyes of the face will be. Specifically, that line will be the center of the eyes and will intersect the irises.

Next, draw the eyebrows just a bit above where the eyes will be, leaving room for the full eye and a bit of eyelid. Keep in mind that the eyebrows are usually wider than the eyes, though if you are doing a stylized face the eyebrows can be shorter and more arched than they would be naturally. Find the halfway point between the top of the eyebrows at the bottom of the oval, which is the chin of your face. The nostrils of the nose should go at this halfway point. If you are doing a very stylized face you may not even draw nostrils, but you should understand where they are so that you can position the nose correctly and also so that you can define the nose even if you only use a stroke of your pencil for that. In some anime drawings, the nose is just a short flat line where the nostrils would be. In some cartoons, the nose almost looks like a balloon with two smaller swellings on the sides for the nostrils. Now that you know where the nose is going, the next most important thing is the mouth. The top of the mouth or the top of the upper lip is usually at the halfway point between the nostrils and the chin. Even stylized drawings typically define both the upper and the lower lip. You can suggest the lips by drawing a very spread out “V” as the middle of the lips with a little curve at the top to suggest the upper left and a larger rounder curve at the bottom to define the lower lip.

You may cover the ears up with hair, but you should still know where they are. Even if you can draw one or two lines to suggest where the ears are or use the ears as a reasonable way to pull the hair back from the face, it’s a good idea to show at least one of them, especially if you are drawing a man or a boy. The top of the ear starts just below the line of the eyebrows, and the ear ends just below the tip of the nose or the nostrils. While these are all idealized measurements, if you are looking at a real person, you may be surprised at how unsymmetrical their face is. It can be quite dramatic with some people. Someone’s ear may be higher or lower than their other ear, for example, and someone’s left eye may be a whole quarter of an inch higher or lower than their right eye. This is an interesting way to do caricatures, and it can also help draw realistic portraits. But you don’t want to make these slight differences too pronounced unless you are drawing a grotesque. 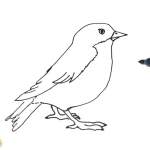 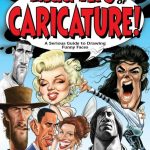