How to Draw Birds Easy Tutorial: Birds can easily be simplified into a few strokes of the pen, and their playful movements and mischievous antics are fun to recreate on paper. Here are a few ideas for how to draw a bird’s basic shape, and then how to modify it so you can draw them in different poses.

With the sideways “v” in place now you’ve got a beak. Put one little solid black dot is where the eye should be. If you want the bird’s eye to be closed, as if it was so happy singing it had its eyes closed, you can make a tiny “u” shape to suggest the closed eyelid. To finish your little pear bird, you draw two lines near the bottom of the big part of the pear to represent the bird’s feet. 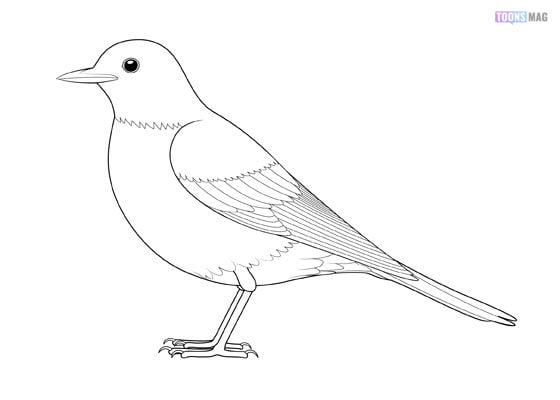 That’s a very simple, beginner way to draw a bird, but you’ll get your point across. If you make two or more birds together, then you can move the pears around to show the birds interacting with each other. This makes for more interesting drawings, and is also a great way to build up your confidence in your drawings, as the more different positions you draw birds in, the better your drawings will become.

If the pear bird does not work for you, you can draw birds as one oval, one circle, and a bar. The oval is the largest part and makes up the body of the bird. Then you draw a little circle, about a quarter to a third the size of the oval, to make the bird’s head. With just one short hash mark, you can make the bird’s beak. You can add a tiny dot for the bird’s eye, but sometimes it is best just to leave the dot out.

It’s up to you. Next you make a long rectangle shape on the opposite side of the oval, opposite where the head is. This is the tail. The tail can be a rectangle, or it can be a triangle. You can add two little hash marks to represent the feet of the bird, or you can leave them out. If the bird is flying, or if it is supposed to be on the ground, it is usually best to leave the feet out, but not always.

The oval bird is nice because it also makes drawing your bird in flight much easier. You can just make two arcs on either side of the bird to represent the wings.

How to Draw Birds Video Tutorial