“José Ortiz Moya (1 September 1932 – 23 December 2013) was a Spanish comics artist, best known for several collaborations with Antonio Segura, such as the series Hombre. Ortiz joined Warren Publishing in 1974 due to his connections with the Valencia studio of Selecciones Illustrada. He would remain with Warren until 1983 and drew more stories for that company (approximately 120) than any other artist. His work included the series Apocalypse, Night of the Jackass and Coffin in Eerie, as well as Pantha in Vampirella and numerous stand-alone stories. Ortiz would also draw Vampirella herself in issues 35 and 36 that title. He won the award for ‘Best All-Around Artist’ at Warren in 1974.” (Caricature of Jose Ortiz, Article Source: Wikipedia) 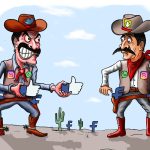