Create Emotions From Simple Changes in the Face, Tutorial by Carlos Gomes Cabral

There are millions of eyes, mouths, noses, ears, chins in the world, each with their own characteristics. However, to draw faces in a cartoon style, you just need to understand the basics of them. Once you have mastered these concepts, pay attention to the depth, make sure that the head of your characters give the impression of being three-dimensional and you have mastered the technique of drawing them from every imaginable angle. If you can do that, great! But if you really want to draw attention to your art, you have to master the technique to bring them to life with facial expressions!
Practically anyone can draw a face. You make a circle with some dots and lines and anyone who looks to it will say that it’s a face. But, in the same way, that it’s something easy to build, it can also become difficult when dealing with feelings and emotions…

The behavior of the Human Face

The various expressions of the human face, like the different tones of voice, can be changed with ease. Expressions aren’t the only result of muscle contraction, but the combined action of several muscles and relaxing of the opposite muscles. The same group act, for example, in both situations of smiling or laughing, only at different intensity levels.
If I ask you to describe exactly what kind of feelings do you identify in the image below, what do you say? 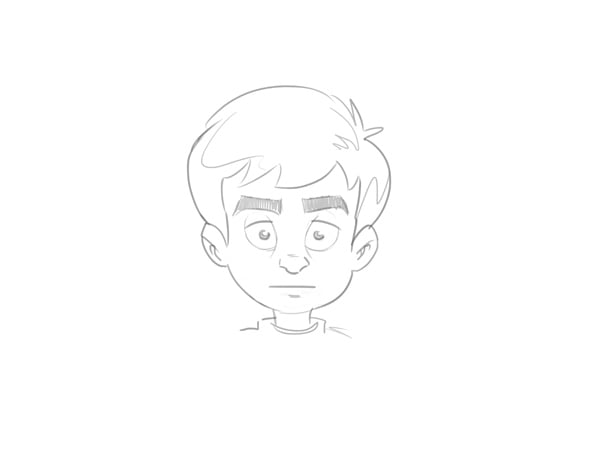 I know what, you’ll tell me that the figure gives you a sense of calm and reflection. Maybe he’s thinking about something. It’s actually none of that! This is actually an image that expresses the complete absence of expression since none of the facial muscles is being used. We’re looking at an absence of emotions, so perhaps calm and relaxed is a good description of the emotion otherwise.
That’s OK if you use this expression every day in your drawings. In fact, this is the expression that people use in 80% of the day! The thing is that these people are only with this face when they are alone, because, when looking to someone else or placing the person into a situation, there is a reaction; that will be answered with another reaction! And when it comes to cartoons, we must exaggerate this effect to the fullest to make it clear to our audience what emotions are being conveyed.

The primary emotions are those where we humans, don’t have enough control over how they originate. This means that this kind of emotion doesn’t have the correct direction. For example, it comes on suddenly, in response to a primary stimulus.
These basic emotions are expressed in our face regardless of culture, race or age. Below I present to you the main ones: 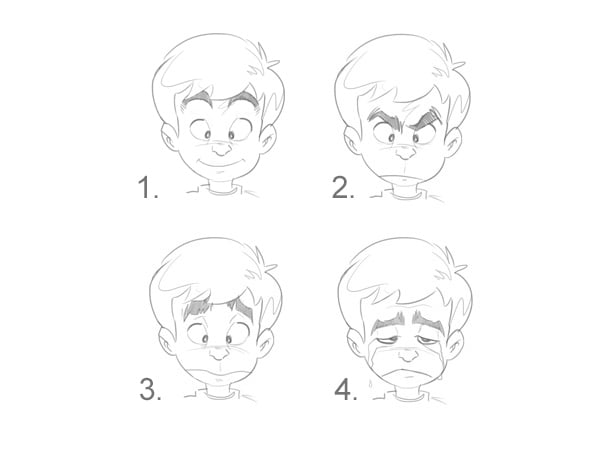 These are the main expressions of the face and we use them most frequently during our lives. For the cartoon, the vast majority of what you will need to develop are those four expressions. From this, we can derive other emotions.
There are two more expressions somewhat lesser-known that compose the group of basic expressions: 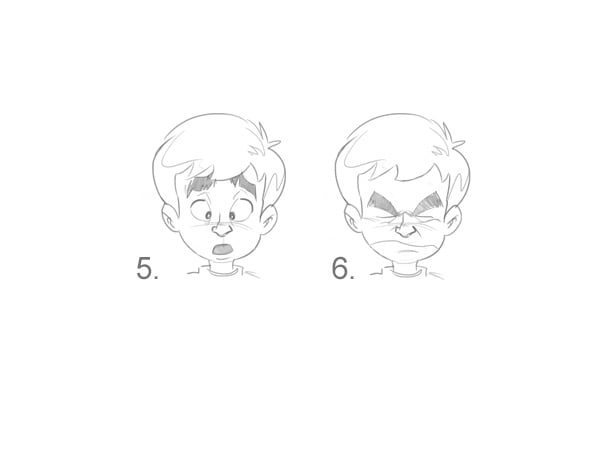 “Why the hell you separate these two from the first group?” Simple: If you notice, these expressions are variations of expressions in the first group.
Now that you’ve been introduced to the primary expressions, you must be wondering why they are so few, right? It’s simple: Just as there are primary colors, which can be mixed to give life to other colors, primary emotions can also be mixed to create several other secondary expressions! Just take a look:
Notice that, to build a sleepy expression, we took the eyebrows from the happiness expression and mixed with the almost closed eyes of the sadness. Cool, isn’t? 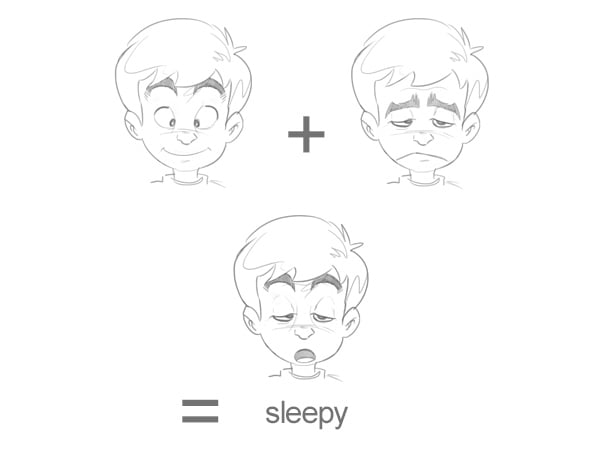 The fun doesn’t stop there! The family emotions are those which build similar emotions by changing only one component of the face, finding another emotion! 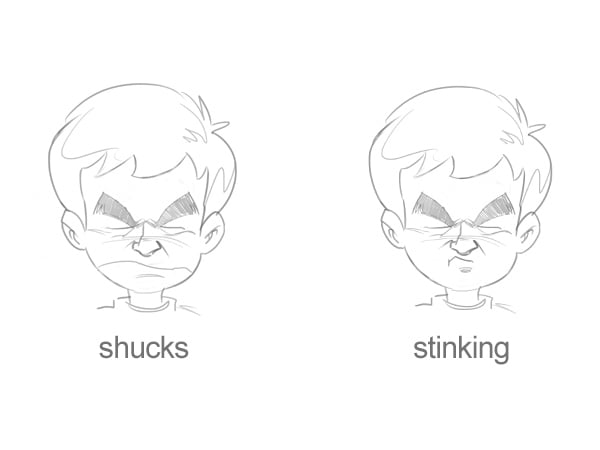 Notice that only the mouth was modified in the two drawings. We can express two different repulsion feelings just by altering a single element of the face! Here is another example: 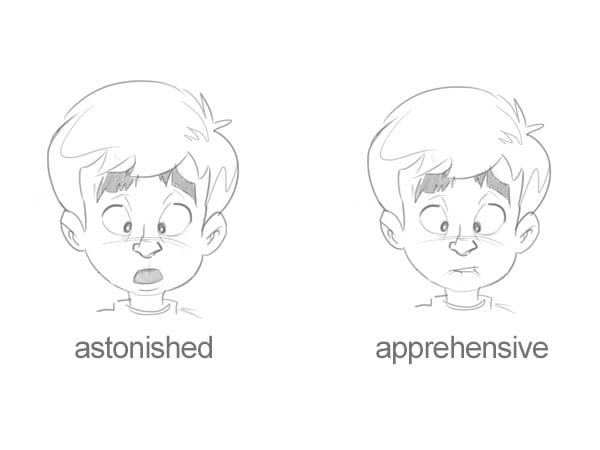 This time we use the mouth and eyes to mount another variant of the same primary emotion. 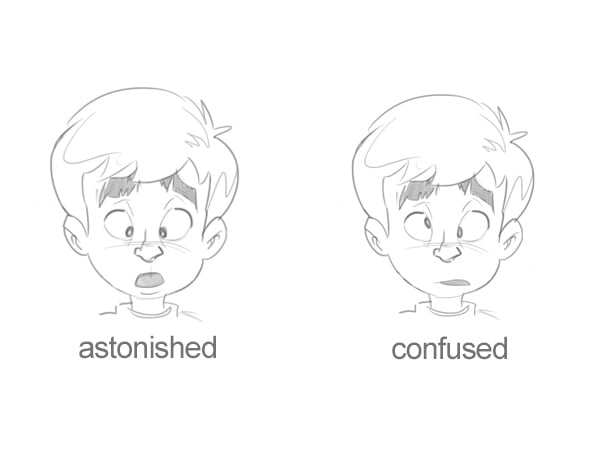 Not only are primary expressions that give rise to other emotions, but we can also extract the third emotion from a secondary emotion too. Check it out: 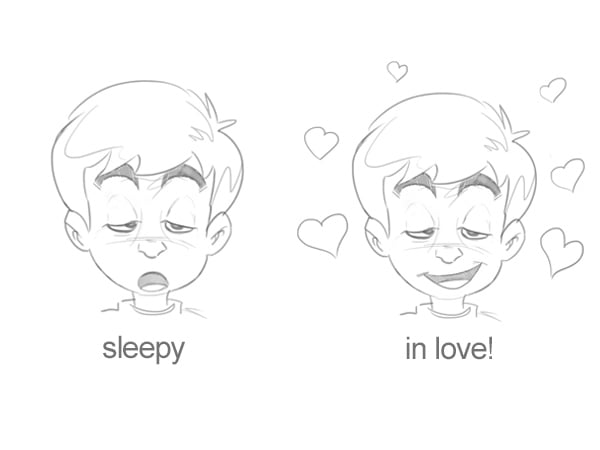 Fantastic, isn’t it? It is quite possible that you get dozens or even hundreds of emotional possible faces for your designs applying these techniques!

Emotions from physical states have a concept very close to primary emotions, but, unlike these, can assume several and unpredictable forms. 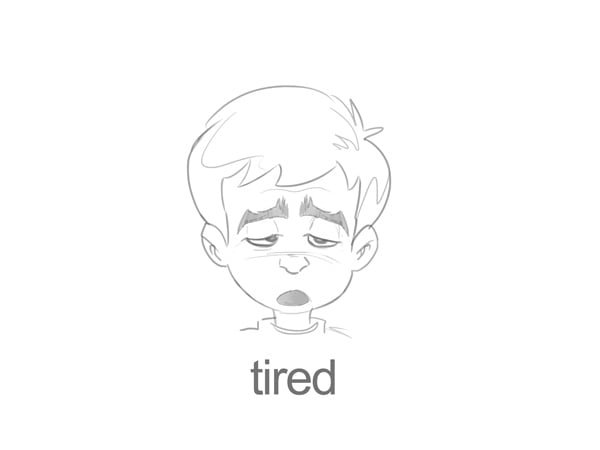 We can enhance an emotion just adding a complementary element, such as expiration drops, for example: 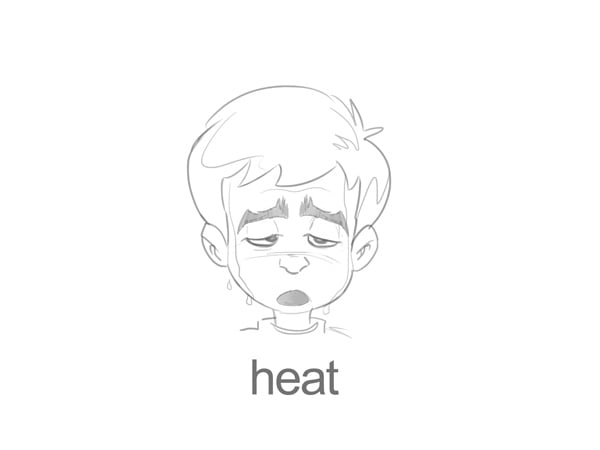 Let’s see another example of the physical reaction which we do not have much control. This time our character is being exposed to a discharge of electrical current! In a nutshell: completely lost control over your own reaction! 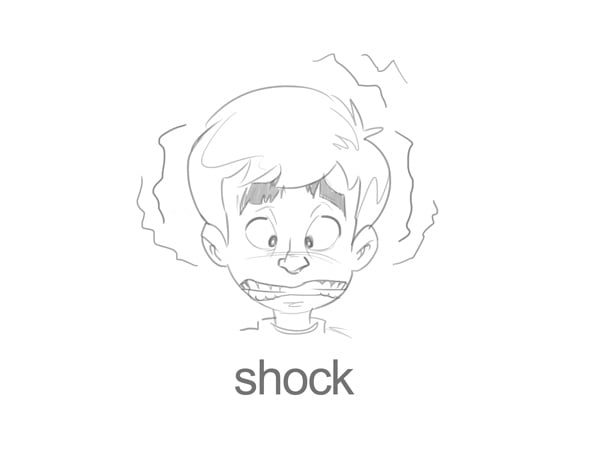 As the reaction of a shock is something we can’t control very well, in the cartoon, it’s an advantage, since we can exaggerate the expression to get the desired result. In this case, we exaggerate the mouth.
Also, notice how the primary emotions are dominant. The shock, even being unmanageable, is a variant of fear. The most interesting in relation to physical emotions is that, in real life, we get these expressions without being aware of how we get it, as we are being exposed to external factors and other conditions.

The intensity and Additional Elements

The cartoon facial expressions are not just limited to a specific degree of intensity. Depending on the intensity, we can create very interesting results: 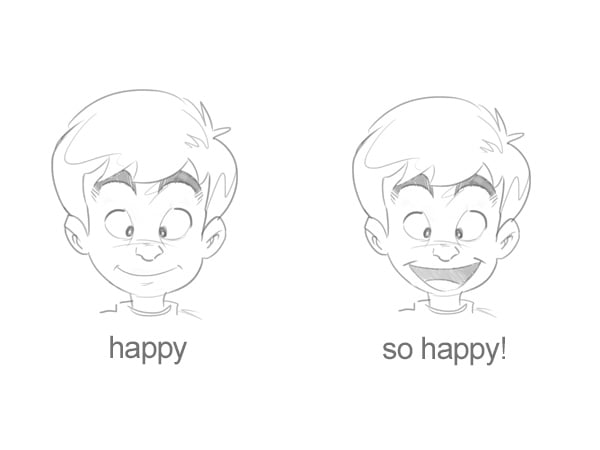 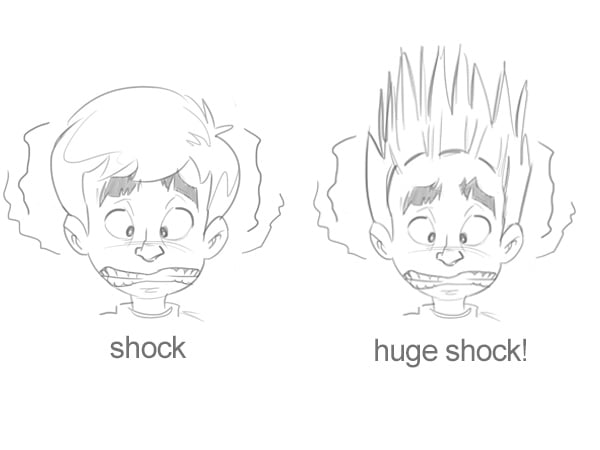 Besides the intensity, we can also insert additional elements to enhance emotions. In the first image, we added a few drops of sweat bouncing from the face to reinforce the fear. In the second one, we put the tongue out to strengthen the desired effect. 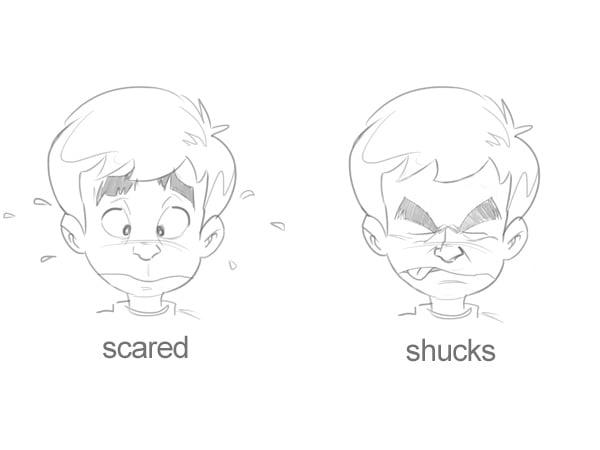 Returning to fear, let’s tweak the image to explore a more intense feeling of panic! 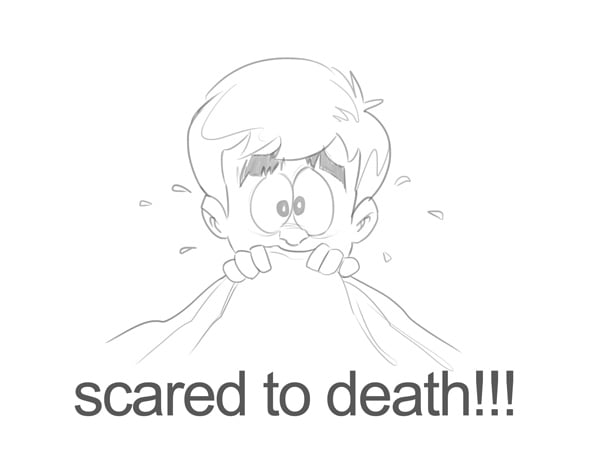