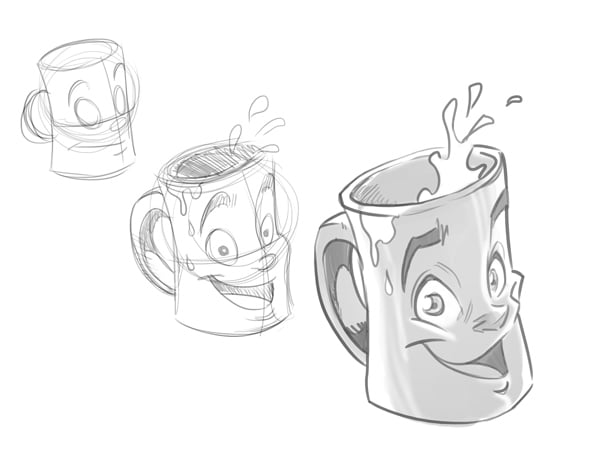 How to Draw a Cartoon Body By Carlos Gomes Cabral

The pleasure of creating a cartoon character is immeasurable. The act of building and developing a character is not just linked to the construction of the figure: each character has its own shape, personality, and attributes. It’s OK if you already know about the proportions of the head and about facial expressions. But that knowledge is useless if you don’t know how to build their bodies! The artist must take into consideration these qualities in order to build a character that is plausible in the eye of the audience.

In the cartoon, there are several different styles of characters, such as “goofy” and “bully.” Do you want to learn more about them? That is what I will teach you in this tutorial.

When creating characters, I recommend the use of rough sketches beforehand. This will provide you with the perfect direction of style and nature of your character.
That being said, the steps that we follow today are quite simple. First, draw the basic shape of the figure and then go adding features and other details of the body. This is a procedure that should be followed regardless of your character to be a human, an animal or even an object that you want to bring to life (eg, make a smiling cup). Every drawing you will make depends on the sketch phase. During this stage, you will refine your draft until the end result pleases you completely.
Once you have defined your ideal proportions, the next step is to develop the expressions of body movement, hands, and legs. Hands even can tell a complete story with only one position. Briefly, there is no mystery to the cartoon design process. 95% of artists build the characters and their moves through specific blocks because it simply makes the process a lot easier!

Proportion is the most important factor to consider in building a cartoon character. The artist should keep in mind the relative size of body parts because it’s based on them we’ll define the structural features of our characters. For example, the bully guy has a combative nature, therefore he has a small head but his chest is prominent! His arms and legs are strong and well defined, as well as his big jaw. In contrast, a demure character is based on the proportions of a baby with a large head in comparison to the body. And all of it in rounded shapes! Other features, such as the forehead and large eyes are responsible for defining their fragile personality. And so on…
Animated studios have the famous practice of using oval shapes to measure the height of a character. For example, A child usually has a head larger than the rest of the body measurements. But the adult has different proportions, which varies according to gender and physique of each character. When designing (or animating) a character’s entire body, it’s recommended to keep several drawings of it on a separate piece of paper. Thus, it’s possible to have a reference to his proportions to draw it in different poses and actions. It’s important to draw your character in different positions, situations, and clothing until you can find the ideal body proportions for him. Samples of a puppy dog.

The Body is a Pear!

It’s a common practice among designers to use pear shapes – or similar objects – to build the body format, because of the association that generates inside everybody’s head. Actually, this is a common technique among cartoon studios, since several different artists work on the same character and must maintain the correct proportions of each one. The above examples demonstrate the effectiveness of this technique. You can draw several different characters using the same template! The reason for drawing based on templates is to create immediate identification in the human brain. Especially in children – where everything should be simplified to be understood. Drawing the body in the format of a pear helps maintain a dynamic look and adds an overall interest in our character! Addition of the Skeleton

Now that we know how to define the forms, we need to define a simple skeleton structure. If you draw any kind of character in a cartoon style, you need to understand the main differences in muscles and bones among different cartoon categories, such as cats, birds, and humans. This knowledge is necessary and it will guide us in relation to the character’s joints, such as elbows and knees. When it comes to a cartoon, it is important to keep in mind that we should be able to tell a story with each scene that we create. This does not happen often when it comes to photos or realistic drawings. Simply because human beings have a great facility to hide their real intentions.
In the cartoon it’s different. The gestural and physical characteristics of your characters must be clear even without any dialogue or scene orientation. For that reason, it’s such a fascinating and adorable art style! Does the “rule of pear” work for all cartoon characters that we’ll create from now on? Not always. If we reverse that shape, we’ll create a sense of strength and power in our character! Notice the examples below. Another interesting analogy would be to base the characters in objects that resemble a specific physical type, like the example below: Basically, we use the same pear principle. We’re just applying a different study based on the same technique. You, as an artist, are free to use the method that suits you best!

The “goofy character” is one who walks on two legs (even the animals) and looks silly, clumsy and, generally, lazy.
This kind of character is often represented as a coward. They are generally more interested in staying out of trouble than anything else. It can also be represented as a nerd or as a frustrated guy. There is a template to be followed in such cartoon characters – although not a definitive rule, and may be changed to suit the nature of each character:
Basically, these are the main attributes needed to make the goofy guy. Play with it until you master the technique to apply to any character. Not all animals that walk like humans are “goofy”. Many of them have a sarcastic and ironic tone. As an example of these characters, we can mention Woody Woodpecker and Bugs Bunny.

We will now build together the body of a character based on the knowledge we have acquired. Let’s get started!

I’ll start drawing in a loose way. No need to worry about making several sketches until you reach the ideal proportion. This is part of the game!
We started building the head and body with rounded shapes: Notice that we’ve defined the measures of our character with almost no effort. Along with the proportions, we added a few directional lines throughout the character to guide us in relation to his bodily gesture.

Let’s add the lines that simulate the joints of the skeleton. Notice that we’re adding a common posture for cartoon hero – where the body weight is hanging on just one leg. It’s important to mark the hip area in the format of a basin because it is easier to see the movement. This movement in the hips is essential to add dynamism in the posture.

Great! Finally, we will include the face details and the body muscle of our great hero. To build the muscles you’ll need to have some basic knowledge of anatomy. Otherwise, it will be difficult to add the right volume that the character needs.

Once you’ve defined the whole structure, we can add some clothing. Perfect. Now our character is complete! By adding the costumes and ideal accessories, we achieved a great final result. Can we tell a story with only this picture?

Well, that’s it! Here were presented the processes to draw bodies in a cartoon style. More than that, we also learned how the circular and oval shapes work together to form the body of the characters. We also learned the differences that make up the heroic/strong/bully type and the helpless/fragile type, and how to apply the technique of the pear to achieve these results. Finally, we discover how to apply the “goofy” technique, both in humans and in animals. To close with a golden key, we create a heroic character completely from scratch! Are you already convinced that you can create a complete cartoon character from head to foot? I’m looking forward to seeing them! Share your drawings with us below and, if you still have any questions, I’ll be happy to answer it in the comments. 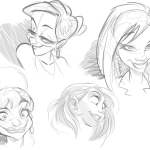 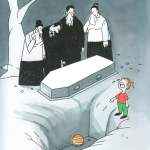