How to Draw the Female Form, a tutorial by Carlos Gomes Cabral
Women can be difficult to draw, whether in a realistic style or cartoon style. This technically should not happen, because anatomically speaking, females have less muscle detail visible to our eyes, compared to males! Their curves are sweet and their expressions are smooth—most of the time. So, why do we have so much difficulty expressing that on paper? I’m here to answer these and more questions on how to draw the female form in cartoons.
Contents hide
1. The Feminine Side…. of the Male!
2. Draw a Female Face
2.1. Step 1
2.2. Step 2
2.3. Step 3
2.4. Step 4
2.5. Step 5
2.6. Step 6
3. More About the Facial Features
3.1. Profile View
4. The Female Body
4.1. Step 1
4.2. Step 2
4.3. Step 3
4.4. Step 4
4.5. Step 5
4.6. Step 6
5. Flexibility and Sex Appeal
6. Go Further With Your Designs
7. Great Work!

The Feminine Side…. of the Male!

The most common mistake made by any student of art who wants to draw a female character is thinking about her as a male in high heels and long hair. This is because, in most cases, we are surrounded by strong male characters, and, regardless of the drawing style, the muscles arouse enormous interest in the artist. Everyone wants to learn how to draw those muscular arms and all those giant veins! So you run to the nearest bookstore and buy a fantastic anatomy book that has 300 pages devoted to male bodies and only 20 dedicated to female figures. You will never be able to draw the female body the right way if you’re thinking the wrong way! 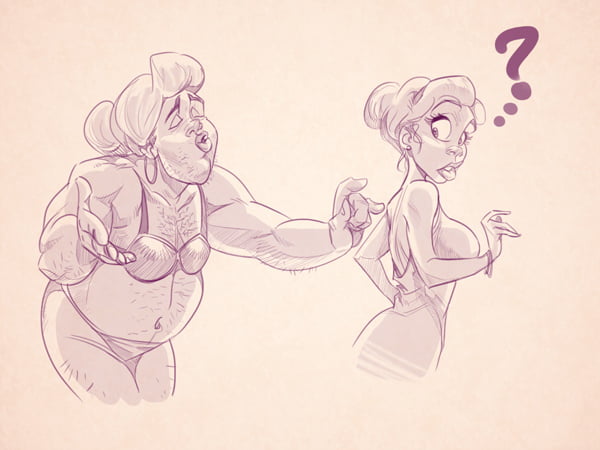 Let’s begin by drawing a female face in a pin-up style, using a common pattern.

First, we’ll start with the classic circular shape of the skull for the character’s head:
Circles should always be the starting point of any cartoon character.

Let’s define the chin shape of our character. It should be thin and pointed out in the center.

To mark the eyes, we’ll do the classic oval shape that you may already have learned in my first tutorial and that is no longer a secret to you.
If you have any doubts about the distance between the eyes, just draw an eye in the middle, to help you measure this separation. This isn’t a rule by any means, it’s just a tip. With time you’ll be able to draw the eyes automatically, but if you are starting out (or are slightly out of practice), it is a great tip to help you avoid getting lost.

Draw the iris and the pupils so that they stand out from the face of the character. Female eyes have the characteristic of being very expressive, so we need to devote some effort to do something really appealing to our character: 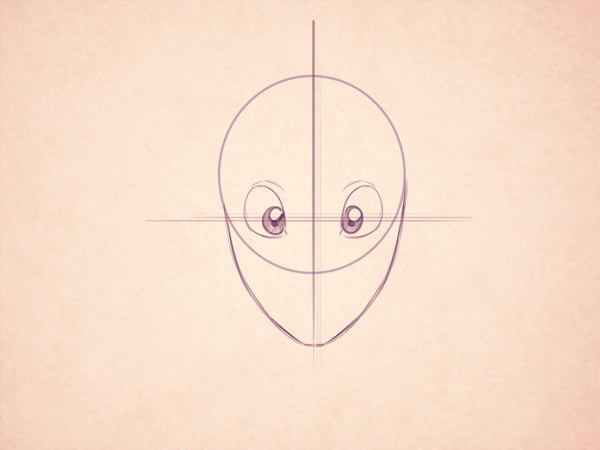 Our character is getting interesting! Let’s proceed with the eyelashes and eyebrows. 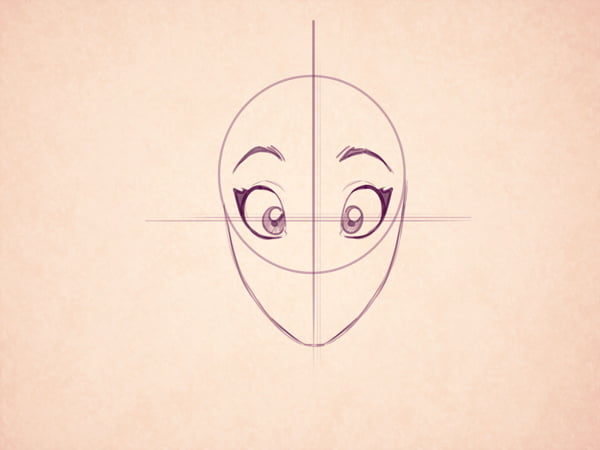 Let’s draw the nose and mouth. I will take some liberty here and select an interesting style for the character. 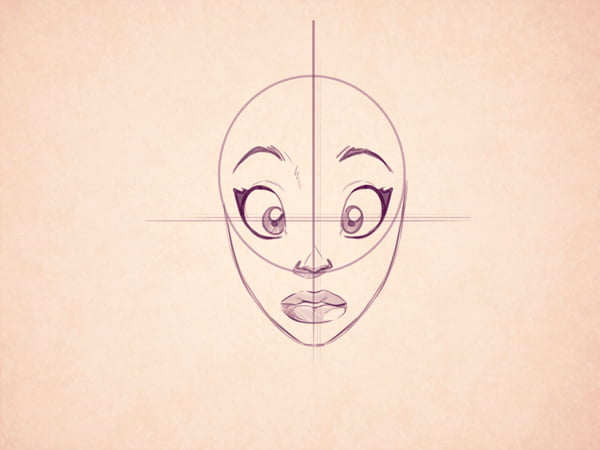 Ready to play stylist? It’s time to pick a hairstyle for our character! Start testing with different sketches until you find a dynamic enough format for her. 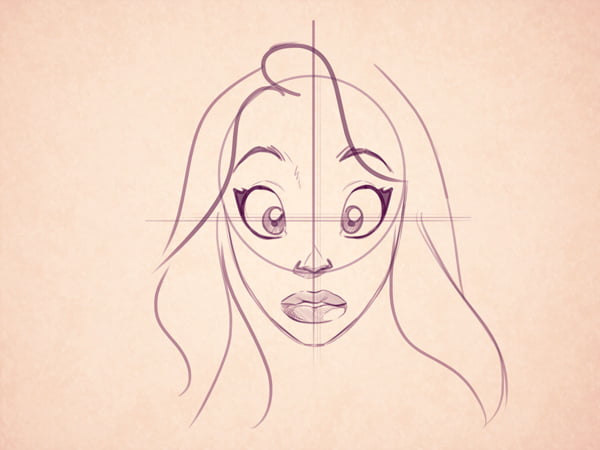 All done—a female character with a good dose of sex appeal! We will now study more about what we can do to change her facial features.

More About the Facial Features

The eyes and mouth are the most important parts of the female face. That doesn’t mean you have to always draw them in different ways, but do draw them precisely!
Pin-up style eyes have two basic emotions: “surprise” and “sexy”. The difference is in the positioning of the eyebrow and eyelid.

Together with the eyes, subtle changes in the mouth will completely change the expression of your character: 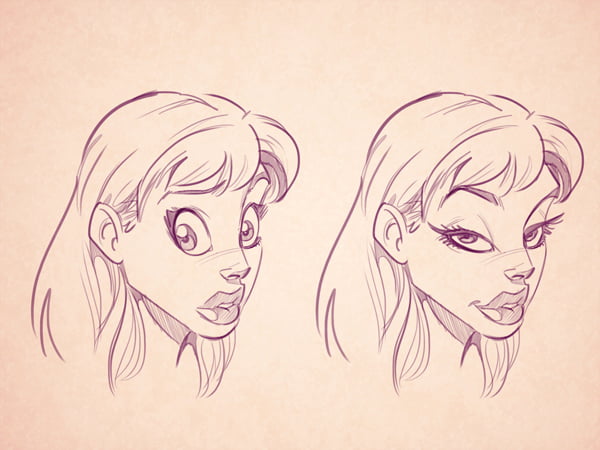 Note that I just added a slight smile in the second image in order to enhance the seductive look. If I had not done that, she would appear to be sleepy!
The mouth can also be designed in various shapes, styles, and sizes. This will depend on the personality you want to give your character.

With the design we just completed, just by changing their eyes to something more realistic, we can achieve a completely different effect on our character. Here’s an example: 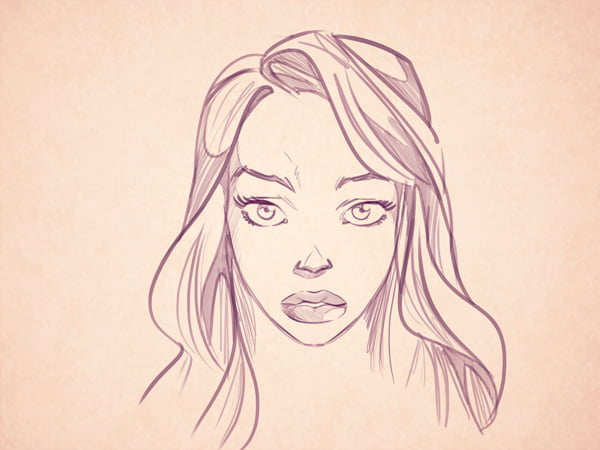 We can also do the opposite, and change the mouth of the character to get a more child-like effect. 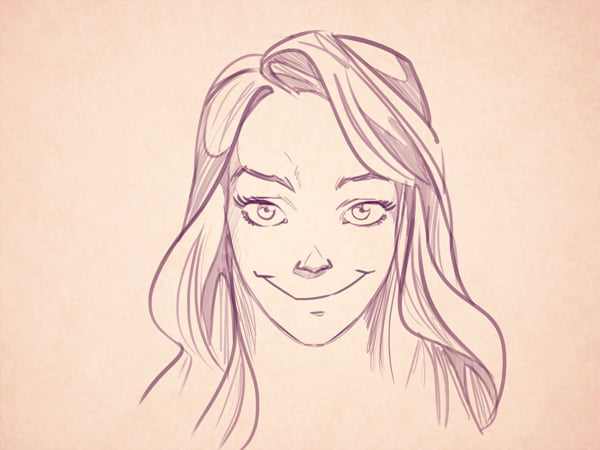 In the Manga style, eyes are responsible for expressing the vast majority of emotions, and their role in Japanese cartoon is extremely valuable. 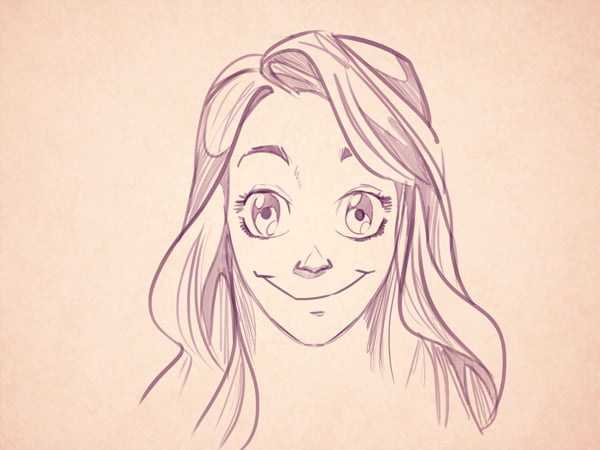 As you can see, making a few changes to just the eyes and mouths can help us modify our pin-up style.
Tip: There are several drawing styles and several different ways of expressing emotions through the eyes. Try to know a variety of cartoon styles and choose the one that best fits your style.

The female face, when viewed from the side, has some subtle differences when compared to the male face. This means that all the features that can be used to reinforce the masculinity of a character should be reversed when it comes to a feminine figure. Here’s an example: 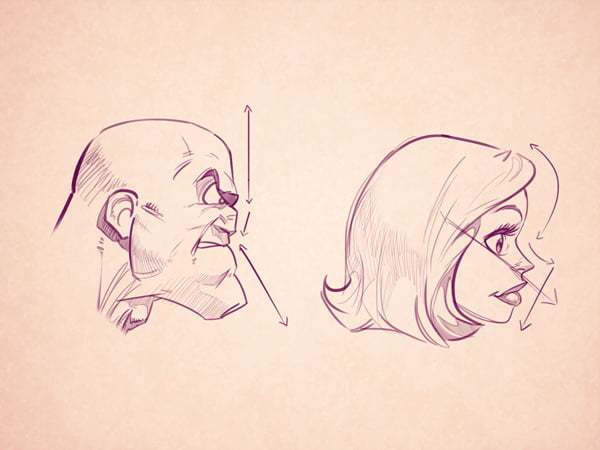 Thus, we conclude that the female face has:

The female body, anatomically speaking, has the same build as a male body, with just a few differences. One example is the hips and waist, where the ratio typically differs. The legs appear to be longer (due to the waist) and much more sinuously curved. The bone structure is where the majority of differences become apparent.
Let’s explore the process of making an “average” female body in cartoon style.

We’ll start by drawing the central axis. Make a vertical straight line with a ruler:
Now let’s define the trunk. Make an inverted triangle, like this:

To find the positioning of the breasts, make a triangle with the point upwards so that it fits perfectly inside the trunk.
Great! Now we will make two circles at the ends to mark the breasts.

Now we define the hip with a simple circle.

To make legs, just draw some curvy lines coming out from the top of the circle, like below.

Now add a new triangle to set the groin at the bottom of the circle.

Very good! This is the basic shape of the female body. Let’s now add the contours and finalize our beautiful female figure.
Once we have the basic template of the female body, we can modify the different proportions! It’s all about the process of designing the character that fits your needs. 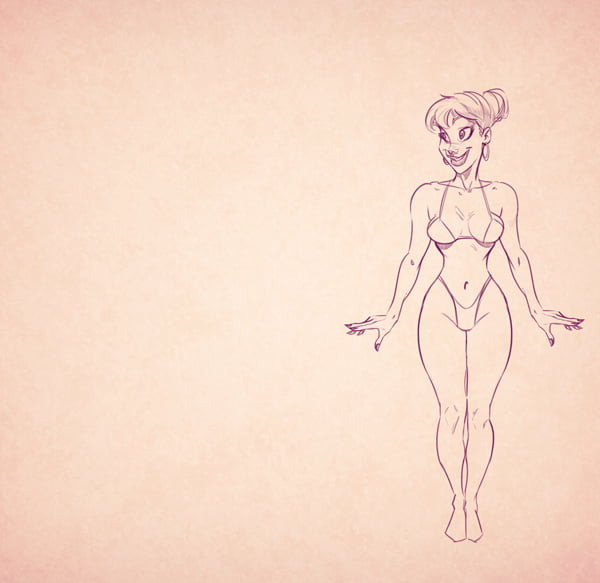 The differences between the female and male body go further than you think and aren’t limited to the size of the muscles and bones. Note the image below and keep in mind these four simple rules: 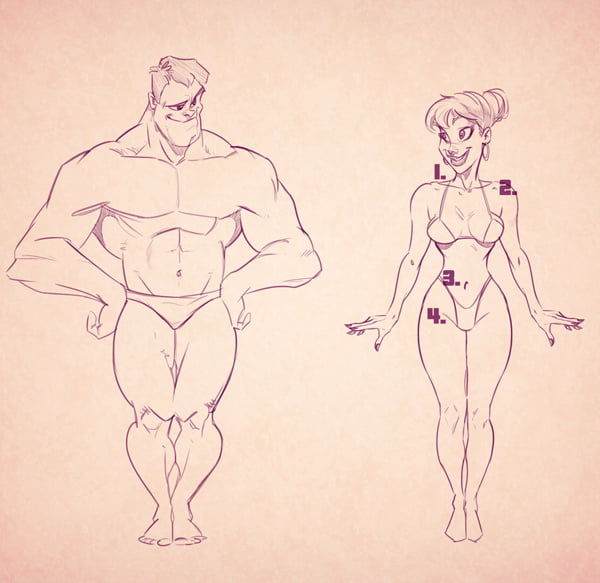 To draw a sexy figure is simpler than you might think. Simply put some flexibility in her back! Even in situations where you think that this technique is not applicable, using it will ensure a much more dynamic result for your designs and can play on the stereotypical hour-glass figure. 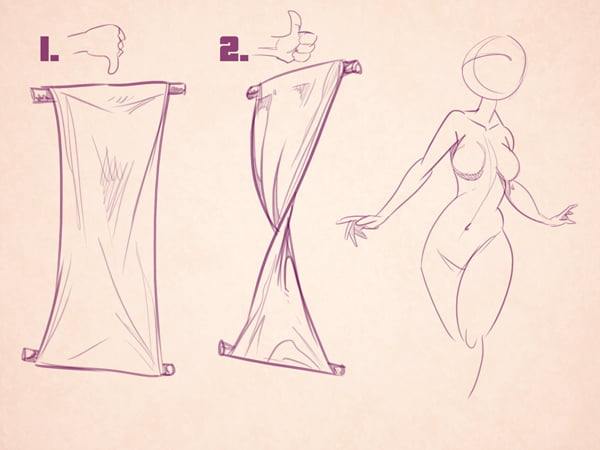 Another way to visualize this technique is to position the angle of the shoulders in relation to the hips. It’s as if your character is wiggling all the time! 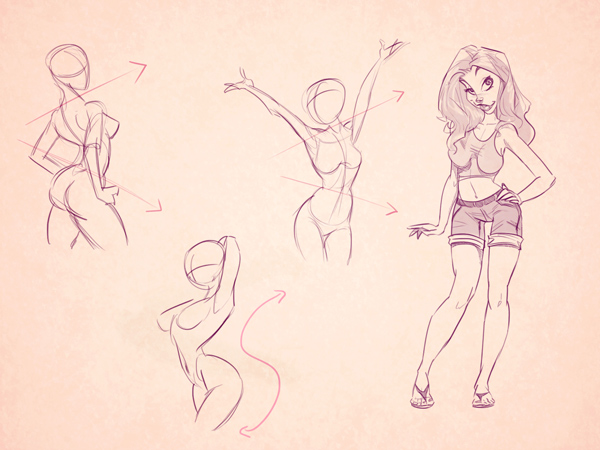 An example of different positions. When the right shoulder is up, the left hip is down and vice versa. Also, pay attention to the “S” curve when drawing the backbone.

Go Further With Your Designs

The artist’s work doesn’t end at the point where they understand how female anatomy works. You also need to know how it should represent your character as a whole. The hairstyle should be appropriate to the age, where she lives, and so should her accessories and clothing—to accompany their age and social group. We call this process Character Design. 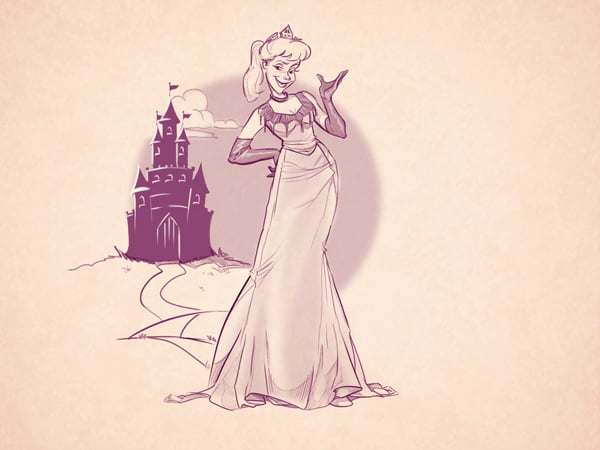 Remember that although the techniques presented here serve as a starting point for your cartoon drawings, the most thorough knowledge of human anatomy and body language is necessary so that you can represent various characters with ease. Remember that not all women are 20 years old and live for the gym. Women have different body proportions, different lifestyles, and are of different ages.

Learning to portray reality through cartoons is essential because, in addition to creating a closer relationship with the audience, it brings you out of your comfort zone to try new possibilities and constantly evolve.
I hope you enjoyed this tutorial. Until next time! 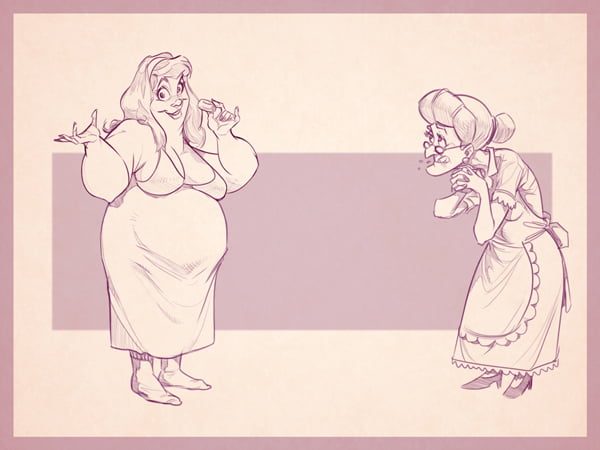