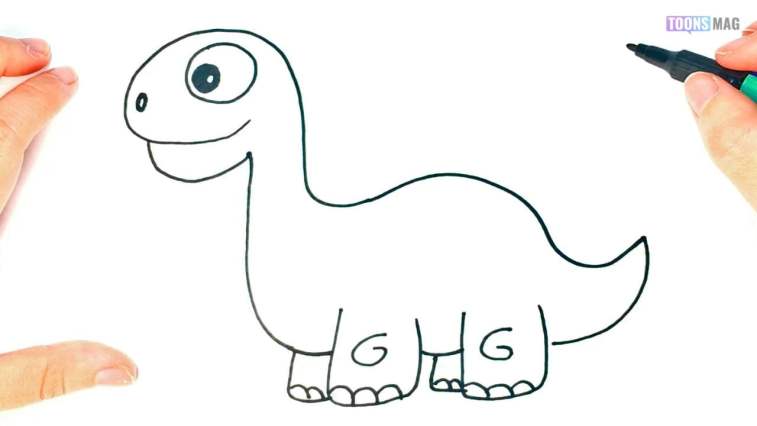 How to Draw a Dinosaur Instruction

There are a lot of different kinds of dinosaurs, so it is hard to give specific steps for all of them in just one article. But the most recognizable dinosaur is a brontosaurus, with its long snake-like neck and little head and large, elephant-like body. So let’s start there.

If you simplify the image of the brontosaurus, it is half snake and half elephant. The top part is the snake, with its small round head and long curving neck that flows into the big hump of its shoulders and then down its back, past its back legs, and then finish with a tapering curve into the end of its tail. The bottom part is an elephant, with four thick, somewhat short legs that end without any long toes or hooves, of anything, just short flat feet.

We want to start with one long line for the snake part of this drawing. It is best to start at the tip of the brontosaurus’s nose, so you can have more control over how you shape the head when you draw the line that will create his chin and lower neck. So put your pencil down on the far right side of your paper and draw a little curve up to create his head. Now slope the line down to create the top part of his neck. You are now basically following the line of his spine as you pull your pencil down, creating the top of his neck.

When you get about four to five lengths of his head down, pull your pencil more left to create the hump of his shoulder, and then down again at about a 45-degree angle to create his back. Brontosaurus’s shoulders are much higher than their hips, or hindquarters, so your pencil needs to continue down and to the left at an angle to make the part of his back between his shoulder and his hindquarters. You can make a little hump to show his hip bones. After that, as you pass the hips of your brontosaurus, you are now on to the tail. Most people like to draw a big sweeping curve to represent the tail, but if you want your brontosaurus’s tail to be straight, that’s okay too. Make the tail about half the length of the rest of your dinosaur.

Now that you’ve finished the tail, you pick your pencil up and go back to the dinosaur’s nose. You are now going to draw the bottom half of him, the part that looks like an elephant.

Pull your pencil to the left from the tip of his nose, making a slight curve down to represent the bottom half of his head and his jaw, then do a little, tiny curve up to show where his throat stars. From there, curve down to follow the same path as your top line, gradually making the space between the two lines wider. As you reach where his shoulder would be, you want the space between the two lines to get much larger, so much so that your pencil may need to go almost straight down. You are now creating his first leg. His first leg should be out in front of his other front leg so you can draw them as a nice, easily understandable silhouette. Brontosaurus’ feet are pretty easy; just make them end in square shapes, and keep the legs the same thickness because brontosaurus’s legs don’t taper at any part.

Do the same thing with the back legs as you did with the front legs in terms of putting one leg in front of the other. Or you can make one leg be behind the other by having the back leg stick out a bit. Then pull your pencil up after you’ve made the further back leg and start the bottom part of the tail, slowly tapering it out until you reach the end and connect your bottom line to the top line you made before. You’ve just finished your first drawing of a dinosaur!

How to Draw a Dinosaur Video Tutorial 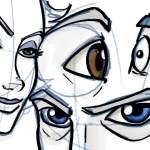 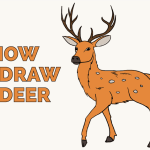