The easiest way to draw a lion is to draw him facing you. That way you don’t have to worry about complicated proportions and perspective. Here’s how to do create a simple lion drawing in less than ten steps.

How to Draw a Lion Facing You

First we’re going to draw your lion’s mane. Make a large circle with shaggy edges… kind of like you would do to show the leaves of a tree in a ragged line. Now, at the bottom of the circle on the outside of it, you’re going to draw his feet. His feet are going to look just a little bit like the trunk of a tree, but there are going to be two of them (of course!) and instead of sloping into the ground the way roots would do, your lion’s feet are going to end in little ball shapes to represent his toes. You can draw the feet so that they don’t overlap, but usually, they look best if both of his front feet touch on the insides of his legs.

Now you are going to draw his face, starting with his nose and his eyebrows. Make a “U” shape in the center of the shaggy circle. The “U” should fill about 20% of the height of the circle (in other words, if you measured the height of the circle, your “U” should take up a fifth of that space). The “U” is going to form your lion’s nose. The “U” should also curve out on the sides, almost like a tulip, but a little bit longer. Each side of the “U”, or each tulip petal, is going to be one of your lion’s eyebrows. 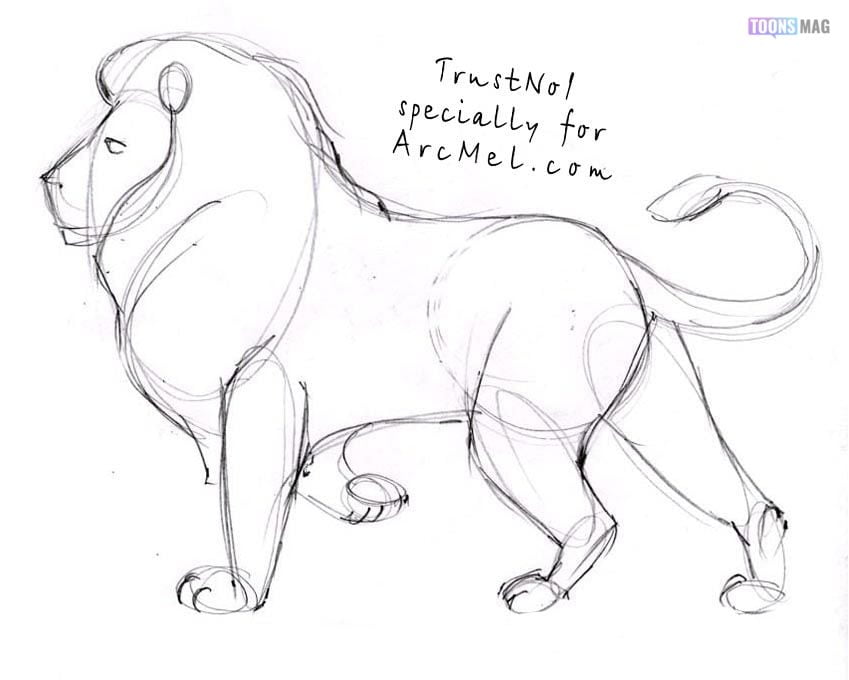 At the bottom of the U, below it, make a little triangle shape and fill it in with your pencil. This is the tip of your lion’s nose. If you make a “W” shape below this, but with the “W” having no sharp points (make it more as two shallow “U”s together), then you have your lion’s mouth. He’s smiling.

Now you’re going to finish your lion’s eyes. Go back to his eyebrows, and just make little arcs from the tip of his eyebrows in toward his nose. His eyes should be leaf-shaped. Then you can make his eyes by drawing a short vertical line inside the leaf shape, or you can fill in his eyes with your pencil to make them solid. If you choose to make your lion’s eyes a solid dark, you can try something just a bit more advanced – leave out just a speck of white to show the light reflecting off his eyes.

Finally, let’s draw his ears. About halfway between the top of his mane and where his eyes are, draw two little “C” shapes. Each “C” should be pointing inward and a little bit down so his ears look like they’re attached to his head. If you want to make your lion extra-regal, or king-like (he is the king of the jungle after all), you can draw a little crown in between his ears. Now you’re done – you’ve drawn your first lion.

How to Draw a Lion Video Tutorial