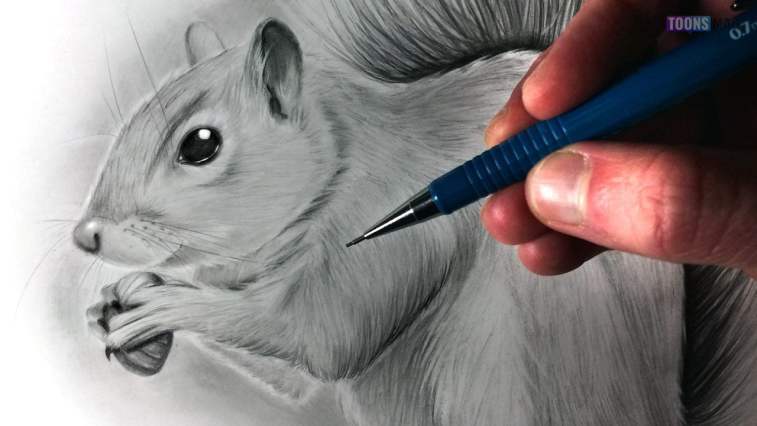 How to Draw a Squirrel

Most of us see squirrels all the time, so they are an easy subject to observe. Here’s how to draw a simple squirrel with just a few lines.

Make a small oval for the head

This should be only a slight oval, almost a circle. Depending on how the oval is tilted, your squirrel can be looking up or down.

Make a pear shape for the body

The top of the pear should intersect with the oval for the head.

Draw the back legs

Make a large circle or oval over the thick side of the pear. This is the big part of the hind leg that’s on the side of the squirrel near you. The other hind leg will be hidden behind the squirrel unless you draw him at an angle that’s facing you or half facing you, which is much harder.

Now you are going to draw the top of the squirrel’s foot. This line should start from the right, about in the center of the oval you just drew for the hindquarters, and slope down to the left until the end of the line is about level with the bottom of the pear shape. Put three vertical hashes near the end of this line to represent the claws of the squirrel’s back feet.

About halfway between where the circle that makes the head and the large oval that makes the hindquarters, draw a similar shape that starts in the middle of the pear shape and goes left, sloping down just a little to create the squirrel’s shoulder. Curl this line at the end, after you’ve gone outside the pear shape to show how the squirrel’s front foot tucks into itself. If you want, you can draw an acorn behind the curl to show the squirrel holding something to eat, or something he wants to hide to eat for later.

Squirrels have big bushy tails, almost the same size as their bodies. The tail can be similar to the first pear shape you made, but it should be more curved and wavy. Squirrels whisk their tails around all the time, so you want the lines for the tail to show movement – usually this is depicted with the tail curving in one direction at the base, and then curving around in another direction at the tip of the tail, kind of like an “s” shape.

Squirrels have tiny ears, so draw two ears that are about the same size as the squirrel’s front feet. A small solid circle can be the squirrel’s eye — it should be about half the size of his front feet or smaller. Another even smaller black dot at the tip of his head can be his nose.

Once you’ve drawn your first simple squirrel, try drawing others either leaning down to the ground or climbing up a tree. Draw two squirrels looking at each other, or one up in a tree with a nut while the other is on the ground, without a nut, looking up. Try drawing a squirrel climbing a tree, but from the angle of being right behind the squirrel, so most of what you see is his back.

How to Draw a Squirrel Video Tutorial 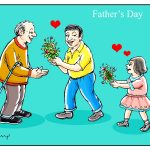 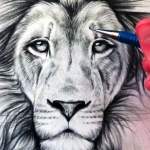