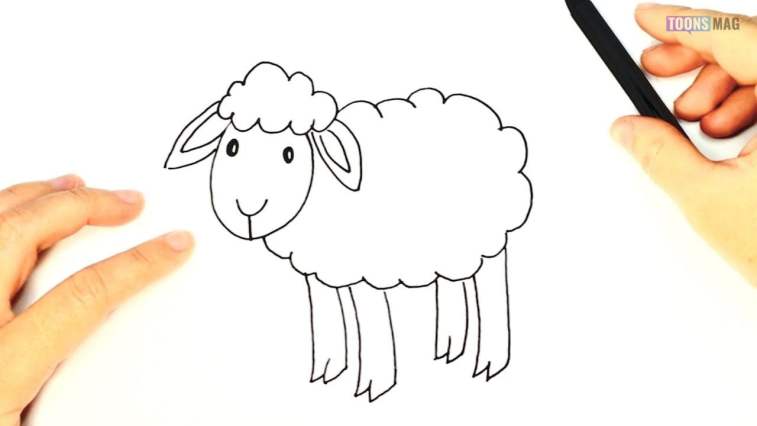 How to Draw a Sheep Easy Tutorial: Sheep are so easy to draw! Here’s how to create a recognizable sheep from a cloud and a bunch of “V” shapes. Children as young as three years old can be taught to draw a sheep like this.

To draw a sheep facing head-on first make a fairly large capital “U” shape. Make sure the sides of the “U” are fairly long. This will make the head of your sheep. Make two dots for the eyes and the top sides of the “U”, and then make a very small capital “Y” towards the bottom of the “U” to represent the sheep’s nose. The ears can be to leaf shapes on either side of the U. To make the sheep’s body, make a large circle around the head of the sheep, but instead of having the line be a fairly flat, bending line, make it into a bunch of curlicues, like curls, or one long scripting series of cursive “e”s, with the loop shape of each “e” being more rounded than oval. Think of clouds. Make the sheep’s body as curly and fluffy and lumpy as a cloud would be.

To make the sheep’s feet you can make long skinny “V”s and leave the sheep’s hooves up to the imagination. Or you can make the legs like the body with the curling looping lines, and put little squares with cleft lines in the middle to represent the hooves.

Drawing a sheep from the side is not much harder at all. From this position you start with the body first. Make an oval on its side – a cloud shape – to represent the sheep’s body, either as a bunch of connecting arcs or “C”s to show this sheep’s fluffiness or with the curlicue cursive “e” line in loops. Use whichever line looks best to you. To make the sheep’s head, make another little puff of fluffy sheep curls on one side of the oval, but leave part of the lump open. There you make the “U” as you did in your first sheep to represent the sheep’s head. Make leaf shapes or eye shapes to show the ears, a black dot to show the sheep’s eye, and a larger black spot at the end of the sheep’s nose to show its nose. On the other side of the oval, the sheep’s backside, make a tiny little puff to show the sheep’s tail. Some people draw sheep tails as a little round puff, while others make them a bit longer. If you make the sheep’s tail longer, then you can show its tail swinging side to side or lifted, which can be a great way to show excitement or interest in a sheep, whether the sheep is standing on the ground or if it is bucking and kicking up its heels.

To finish your sideways sheep, add the legs. These can be straight tapering lines if you want your sheep’s legs not to have a lot of wool on them, or they can be in the same curly wavy lines that the body was. You can make hooves as little squares, or if you want you can fill them in with your pencil so the hooves are black.

How to Draw a Sheep Video Tutorial 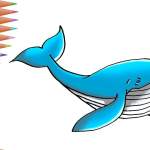 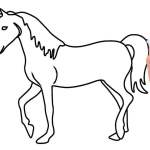