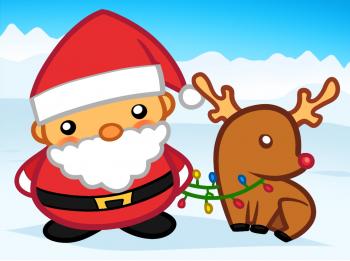 You are drawing two figures, which means double the work. Begin with two head shapes like so, and then add a facial guide for Santa. All you have to do here is draw in Santa’s famous hat and you can actually do this using any style you want. Make the ears and move along. Next, use the single face guide to draw out Santa’s eyes and nose like so, and then draw in the wide triangular shaped curly beard which should start under the nose. Next, draw the ornament shaped body for Santa, and then draw in his belt which is stretched around his waist. You will be finishing Santa off with this step which means the next one is gonna be all about Rudolph. Simply draw in two arms and two feet like so, and make the marking line for his mittens. Okay, guys, you will be drawing a lot more than just some basic lines in this first step to drawing Rudolph. Make the shape of the head and then continue with the same lining to form the first leg. Draw and color in the eye, as well as draw the nose and antlers. Almost done guys, all you have to do is draw the rest of Rudolph’s body which includes the other front leg, as well as the hind leg. Make the lines for the hooves. You will finish off this lesson by drawing the string of lights that Santa has wrapped around Rudolph’s neck. Make the little light bulbs and clean up the drawing to complete the tutorial. Here is the finished line art when all is said and done. Now you can color in the drawing and be on your merry way. 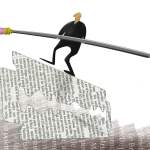 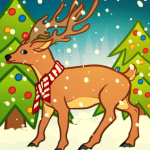