John Wilson Bengough ( 7 April 1851 – 2 October 1923) was one of Canada’s earliest cartoonists, as well as an editor, publisher, writer, poet, entertainer, and politician. Bengough is best remembered for his political cartoons in Grip, a satirical magazine he published and edited, which he modeled after the British humor magazine Punch. He published some cartoons under the pen name L. Côté. 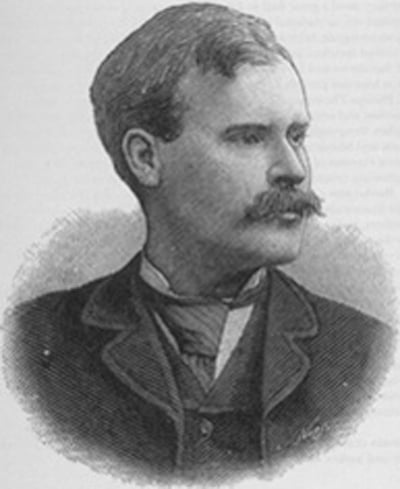 He was born in Toronto in the Province of Canada to Scottish and Irish immigrants, Bengough grew up in nearby Whitby, where after graduating from high school. Bengough was of average height and had grey eyes and dark hair. He married twice; neither marriage produced children. He married Helena “Nellie” Siddall in Toronto on 30 June 1880; she died in 1902. He remarried to a friend from his school days, the widow. Annie Robertson Matteson, in Chicago on 18 June 1908. Neither appears to have written about Bengough.

He began a career in newspapers as a typesetter. The political cartoons of the American Thomas Nast inspired Bengough to direct his drawing talents towards cartooning; a lack of outlets for his work drove him to found Grip in 1873. The Pacific Scandal gave Bengough ample material to lampoon, and soon Bengough’s image of prime minister John A. MacDonald achieved fame across Canada. After Grip folded in 1894, Bengough published books, contributed cartoons to Canadian and foreign newspapers, and toured giving chalk talks internationally. 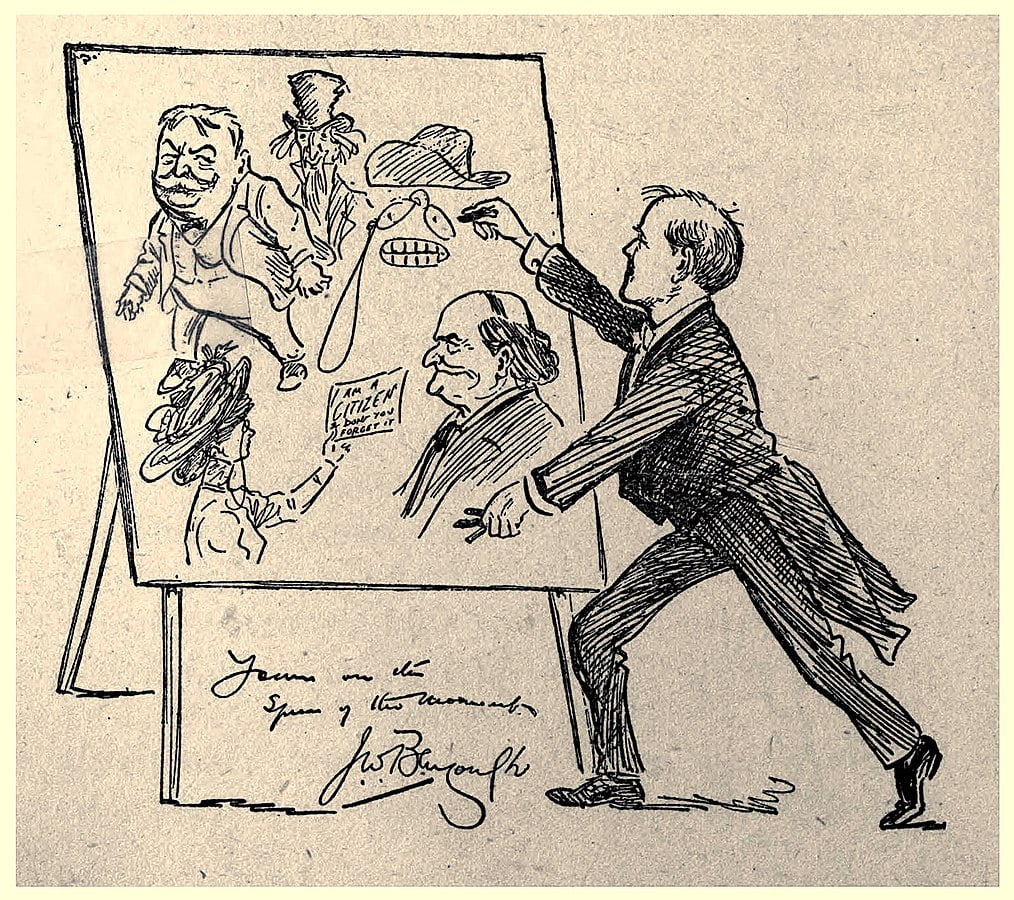 Bengough was deeply religious and devoted himself to promoting social reforms. He supported free trade, the prohibition of alcohol and tobacco, women’s suffrage, and other liberal beliefs, but was opposed to Canadian bilingualism. Bengough had ambitions to run for office, though Liberal leader Wilfrid Laurier convinced him against running for Parliament; he served as an alderman on the Toronto City Council from 1907 to 1909. The Canadian government listed Bengough as a Person of National Historic Significance in 1938 and he was inducted into the Canadian Cartoonist Hall of Fame in 2005. 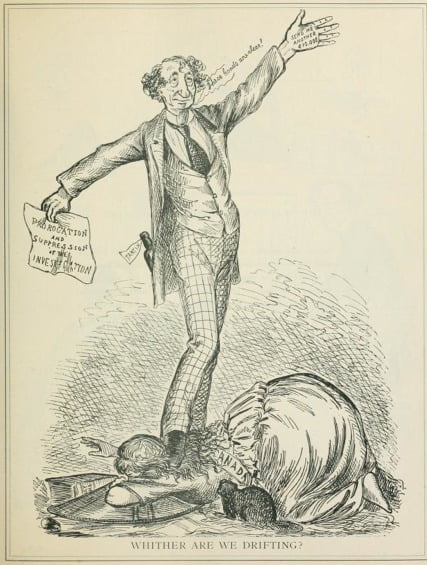 Bengough drew mainly political cartoons. His cartoons and writing tend towards the preachy and didactic; he believed that humor should serve the interests of the state rather than merely to amuse. Bengough tended in his writing towards satirical humor and puns, which George Ramsay Cook called “sometimes sophomoric”. He read Dickens, Shakespeare, and Carlyle with particular devotion.

Bengough had little exposure to formal art education aside from one term at the Ontario School of Art. His sketchy cartoons derived from a mid-19th-century engraving style; while often drawn well, they were crowded in composition and sometimes borrowed from other sources. Bengough could draw in contrasting styles, as evidenced by cartoons he did under the pseudonym of L. Côté. As typical of political cartoonists of the time, Bengough aimed less at laughter as at social satire and depended more on readers’ understanding of densely packed allusions. 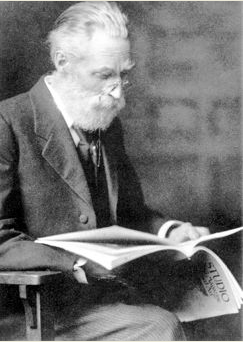 Bengough’s cartoons are best remembered for fixing his renditions of MacDonald in the public imagination. Bengough’s bulbous-nosed politician often appeared baggy-eyed with bottles of alcohol in his hands as a somber symbol of corruption, in contrast to the work of John Henry Walker, another prolific caricaturist of MacDonald who depicted the prime minister’s drunkenness to make light of him. Bengough continued to hone his draftsmanship after MacDonald’s death, but the wit and inspiration of his MacDonald cartoons continue to draw the most attention.

John Wilson Bengough’s reputation was as a supporter of the Liberal Party of Canada and its pro-democratic platform. His family had been supporters since before Confederation; his father had supported Oliver Mowat and both his brother Thomas and sister Mary worked in Mowat’s provincial government. Members of his family were to play roles in the Liberal Party into the twentieth century; Bengough and his brother Thomas had ties close enough with Wilfrid Laurier to ask for favors, and both were also close to William Lyon Mackenzie King. Bengough had ambitions to run for Parliament, but Liberal leader Laurier convinced him against it; Laurier also turned down a request of Bengough’s for a Senate appointment as a reward for a lifetime of Liberal support.

Bengough had liberal views on race relations, and painted a picture of Canada as being more open to integration than the US during the Reconstruction Era; according to David R. Spencer, his views on race were not likely widely shared in Canada at the time. While Bengough sympathized with the plight of Canada’s native peoples, he condemned the 1885 North-West Rebellion and called for the execution of Métis rebel leader Louis Riel, and celebrated Major-General Frederick Dobson Middleton’s victory at the Battle of Batoche in Saskatchewan with a poem. His racial caricatures could, according to Carman Cumming, lead a modern reader to see him as “a racist chauvinist bigot”.They distort facial features and behavior in ways typical of cartoons of the era and employ such derogatory terms as “coon” for blacks and “sheeny” for Jews. Bengough called for restrictions on Chinese and Irish immigration and his work shows a bias against immigrants who did not conform to Anglo-Saxon Protestant ideals. 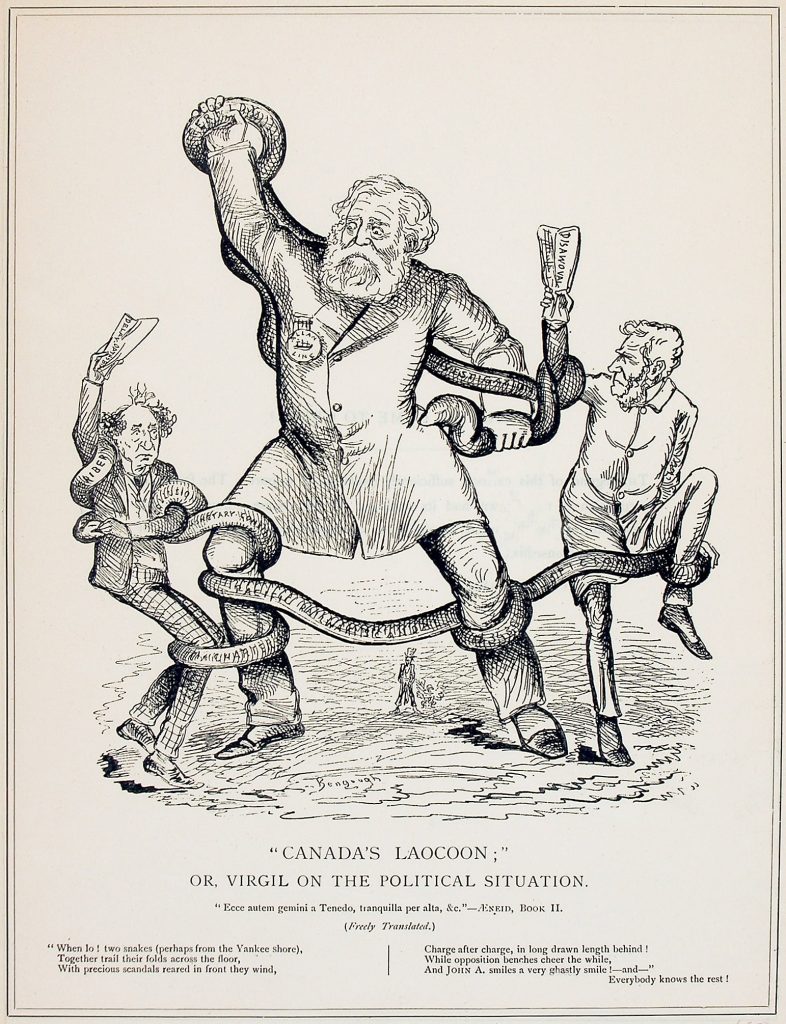 As Nast had in the US, John Wilson Bengough succeeded in establishing editorial cartooning as a force in journalism in the late 19th century. The church minister and Queen’s College principal George Monro Grant called Bengough “the most honest interpreter of current events [Canada happens] to have” and declared he had “no malice in him” but had “a merry heart, and that doth good like a medicine”.The reformist English newspaper editor William Thomas Stead considered Bengough “one of the ablest cartoonists in the world”.Bengough’s artistic legacy rests chiefly on his caricatures of MacDonald.To Peter Desbarats and Terry Mosher, Bengough’s bulbous-nosed caricatures of MacDonald as “ungainly, boozy, and corrupt engraved itself on the public mind, particularly in the days before newspapers published photographs of politicians”.MacDonald nevertheless deflated much of the power his caricaturists might have had as he often made light of his own alcoholism. Bengough met the prime minister in person only once.

No copies remain of the comic opera Hecuba; or Hamlet’s Father’s Deceased Wife’s Sister, a comic opera with a score by G. Barton Brown. Publisher F. F. Siddall registered it for copyright in 1885. The opera may have been an earlier version of Puffe and Co. or Hamlet, Prince of Dry Goods, for which an updated and possibly unpublished script exists, and for which Clarence Lucas had written a score that Bengough appears to have rejected.