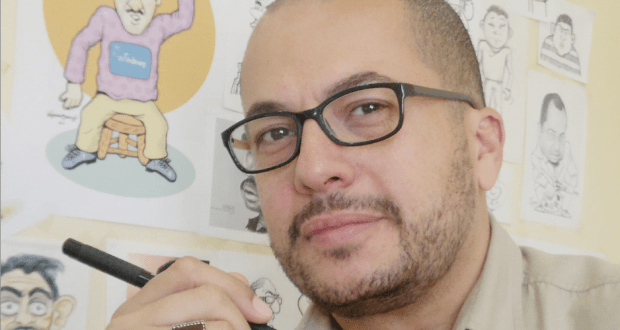 In the late 1970s and early 1980s, Yasser Hussein was one of the thousands of school-age children with their noses in Egyptian editions of Mickey and Tintin magazines. At the age of 10, Hussein, who was born in 1972, started to put pen to paper, but it was only when he met artist Sayed Badawy that he began to understand that he was a caricaturist in the making. It was Badawy, a friend of the young boy’s father and a cartoonist with Al-Ahram, who first introduced Hussein to the term “caricature.”

“When Badawy took a glance at my drawings, he told my father that the quality of my lines was much higher than drawings made by kids at that age,” Yasser Hussein recalls. “It was the first time I’d heard that I was actually drawing caricatures and that it was not just some childish hobby.”

Badawy encouraged Hussein to learn from and follow the works of artists like Al-Ahram’s Salah Jahin and Al-Akhbar’s Mustafa Hussein and also to always seek inspiration. “While growing up, I continued to draw and get guidance from Badawy and other artists until I enrolled in the Fine Arts Department of the Faculty of Specific Education.” In 1993, the art student was 19 years old when Caricature, with the editor in chief Mustafa Hussein at the helm, hit newsstands. “I was recommended by my professors to join its team of artists. I also started to contribute to many other publications like the Egyptian-Sudanese magazine Al Ikhaa, Al-Naba’ [The Report] newspaper and Al-Ahram’s Friday supplement. I also drew portraits of celebrity interviewees in the sports newspaper al-Kora wee al-Malaeb [Football and the Pitch].”

With the same name as of late cartoonist Mustafa Hussein, Yasser Hussein admits he was greatly influenced by the pioneering artist’s caricatures and characters which used to appear every day on the last page of Al-Akhbar newspaper. “Lots of people when seeing my works thought that I was Mustafa Hussein’s son,” Yasser says with a laugh. “When I first started, some people claimed that I try to copy Mustafa Hussein’s work, but I think it is a regular accusation for debuting artists.”
But Hussein rarely drew politically driven caricatures — until the revolution of January 25, 2011. “I always believed that in Egypt all our social problems are related to politics. But before the revolution, we, as cartoon artists, couldn’t caricature the president or the prime minister and so caricature was somewhat tamed at that time,” reveals Hussein.

Another challenge for caricature artists was that unlike other types of visual artists, they cannot sell their artworks like paintings or drawings can be sold. “At the beginning of my career, I used to join group exhibitions in Egypt, before putting on my first solo exhibition in Cairo, says Hussein. With an apparent flair for not only caricatures but also comics and storytelling, the promising young caricaturist took off in 2004 in search of more freedom of expression and better financial stability. Despite being based in Kuwait, Hussein has never felt disconnected from the continuous changes in Egyptian society which he retraces with his colorful drawings and funny cartoons. In addition to making use of classic tools like pencils and watercolors, Hussein also injects multi-dimensions in his drawing by using tablet technologies and Photoshop software.

“The best thing that can happen to caricatures after being published in magazines and newspapers is to have them compiled in one book after they’ve been displayed in solo exhibitions.” Hussein published his first book Like Old Sayings in 2010 after compiling drawings and cartoons spanning his 20-year career. Hussein organized a solo exhibition by the same name in Cairo to coincide with the launch.

Last January, Hussein issued his newest book Hawadity “My Own Tales” in which he adapted incidents that happened to him into 24 stories using words and illustrations. “I think this book is my passage from being a cartoonist to becoming a satirist,” says Yasser, whose next dream project is to “create an academic book that guides young talents to find their way to become cartoonists and illustrators.”

Yasser Hussein’s works can be found on his Facebook page at www.facebook.com/Yasser.Hussein.Cartoons 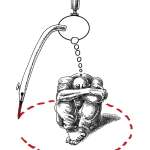 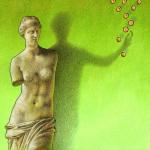