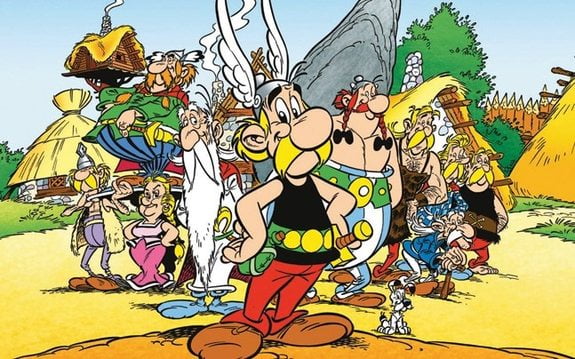 Asterix or The Adventures of Asterix, in French: Astérix or Astérix le Gaulois lit. “Asterix the Gaul” is a French bande dessinée series about Gaulish warriors, who have adventures and fight the Roman Empire during the era of Julius Caesar. The series first appeared in the Franco-Belgian comics magazine Pilote on 29 October 1959. It was written by René Goscinny and illustrated by Albert Uderzo until the death of Goscinny in 1977. Uderzo then took over the writing until 2009, when he sold the rights to publishing company Hachette. In 2013, a new team consisting of Jean-Yves Ferri (script) and Didier Conrad (artwork) took over. As of 2019, 38 volumes have been released, with the most recent released in October 2019.

Each Asterix comic starts with the following introduction:

The year is 50 BC. Gaul is entirely occupied by the Romans. Well, not entirely… One small village of indomitable Gauls still holds out against the invaders. And life is not easy for the Roman legionaries who garrison the fortified camps of Totorum, Aquarium, Laudanum and Compendium…

The series follows the adventures of a village of Gauls as they resist Roman occupation in 50 BCE. They do so by means of a magic potion, brewed by their druid Getafix (Panoramix in the French version), which temporarily gives the recipient superhuman strength. The protagonists, the title character Asterix and his friend Obelix, have various adventures.

The “-ix” ending of both names (as well as all the other pseudo-Gaulish “-ix” names in the series) alludes to the “-rix” suffix (meaning “king”) present in the names of many real Gaulish chieftains such as Vercingetorix, Orgetorix, and Dumnorix.In many of the stories, they travel to foreign countries, though other tales are set in and around their village. For much of the history of the series (Volumes 4 through 29), settings in Gaul and abroad alternated, with even-numbered volumes set abroad and odd-numbered volumes set in Gaul, mostly in the village.

The Asterix series is one of the most popular Franco-Belgian comics in the world, with the series being translated into 111 languages and dialects as of 2009. The success of the series has led to the adaptation of its books into 13 films: nine animated, and four live-action (one of which, Asterix & Obelix: Mission Cleopatra, was a major box office success in France). There have also been a number of games based on the characters, and a theme park near Paris, Parc Astérix. The very first French satellite, Astérix, launched in 1965, was also named after the comics character. As of 2017, 370 million copies of Asterix books have been sold worldwide, with co-creators René Goscinny and Albert Uderzo being France’s best-selling authors abroad.

Prior to creating the Asterix series, Goscinny and Uderzo had previously had success with their series Oumpah-pah, which was published in Tintin magazine. Astérix was originally serialized in Pilote magazine, debuting in the first issue on 29 October 1959. In 1961 the first book was put together, titled Asterix the Gaul. From then on, books were released generally on a yearly basis. Their success was exponential; the first book sold 6,000 copies in its year of publication; a year later, the second sold 20,000. In 1963, the third sold 40,000; the fourth, released in 1964, sold 150,000. A year later, the fifth sold 300,000; 1966’s Asterix and the Big Fight sold 400,000 upon initial publication. The ninth Asterix volume, when first released in 1967, sold 1.2 million copies in two days.

Uderzo’s first preliminary sketches portrayed Asterix as a huge and strong traditional Gaulish warrior. But Goscinny had a different picture in his mind, visualizing Asterix as a shrewd, compact warrior who would possess intelligence and wit more than raw strength. However, Uderzo felt that the downsized hero needed a strong but dim companion, to which Goscinny agreed. Hence, Obelix was born. Despite the growing popularity of Asterix with the readers, the financial backing for the publication Pilote ceased.

Pilote was taken over by Georges Dargaud. When Goscinny died in 1977, Uderzo continued the series by popular demand of the readers, who implored him to continue. He continued to issue new volumes of the series, but on a less-frequent basis. Many critics and fans of the series prefer the earlier collaborations with Goscinny. Uderzo created his own publishing company, Les Editions Albert-René, which published every album drawn and written by Uderzo alone since then. However, Dargaud, the initial publisher of the series, kept the publishing rights on the 24 first albums made by both Uderzo and Goscinny. In 1990, the Uderzo and Goscinny families decided to sue Dargaud to take over the rights.

In 1998, after a long trial, Dargaud lost the rights to publish and sell the albums. Uderzo decided to sell these rights to Hachette instead of Albert-René, but the publishing rights on new albums were still owned by Albert Uderzo (40%), Sylvie Uderzo (20%) and Anne Goscinny (40%). In December 2008, Uderzo sold his stake to Hachette, which took over the company. In a letter published in the French newspaper Le Monde in 2009, Uderzo’s daughter, Sylvie, attacked her father’s decision to sell the family publishing firm and the rights to produce new Astérix adventures after his death. She said:

… the co-creator of Astérix, France’s comic strip hero, has betrayed the Gaulish warrior to the modern-day Romans – the men of industry and finance.

However, René Goscinny’s daughter, Anne, also gave her agreement to the continuation of the series and sold her rights at the same time. She is reported to have said that “Asterix has already had two lives: one during my father’s lifetime and one after it. Why not a third?”. A few months later, Uderzo appointed three illustrators, who had been his assistants for many years, to continue the series. In 2011, Uderzo announced that a new Asterix album was due out in 2013, with Jean-Yves Ferri writing the story and Frédéric Mébarki drawing it.

A year later, in 2012, the publisher Albert-René announced that Frédéric Mébarki had withdrawn from drawing the new album, due to the pressure he felt in following in the steps of Uderzo. Comic artist Didier Conrad was officially announced to take over drawing duties from Mébarki, with the due date of the new album in 2013 unchanged. In January 2015, after the murders of seven cartoonists at the satirical Paris weekly Charlie Hebdo, Astérix creator Albert Uderzo came out of retirement to draw two Astérix pictures honoring the memories of the victims.

Asterix Conquers Rome is a comics adaptation of the animated film The Twelve Tasks of Asterix. It was released in 1976 and was the 23rd volume to be published, but it has been rarely reprinted and is not considered to be canonical to the series. The only English translations ever to be published were in the Asterix Annual 1980 and never an English standalone volume. A picture-book version of the same story was published in English translation as The Twelve Tasks of Asterix by Hodder & Stoughton in 1978. In 1996, a tribute album in honor of Albert Uderzo was released titled “Uderzo Croqué par ses Amis”, a volume containing 21 short stories with Uderzo in Ancient Gaul.

This volume was published by Soleil Productions and has not been translated into English in 2007, Les Editions Albert René released a tribute volume titled Astérix et ses Amis, a 60-page volume of one-to-four-page short stories. It was a tribute to Albert Uderzo on his 80th birthday by 34 European cartoonists. The volume was translated into nine languages. As of 2016, it has not been translated into English. In 2016, the French publisher Hachette, along with Anne Goscinny and Albert Uderzo decided to make the special issue album The XII Tasks of Asterix for the 40th anniversary of the film The Twelve Tasks of Asterix. There was no English edition. The main setting for the series is an unnamed coastal village (rumored to be inspired by Erquy) in Armorica (present-day Brittany), a province of Gaul (modern France), in the year 50 BC. Julius Caesar has conquered nearly all of Gaul for the Roman Empire. The little Armorican village, however, has held out because the villagers can gain temporary superhuman strength by drinking a magic potion brewed by the local village druid, Getafix. His chief is Vitalstatistix.

The main protagonist and hero of the village are Asterix, who, because of his shrewdness, is usually entrusted with the most important affairs of the village. He is aided in his adventures by his rather corpulent and slower thinking friend, Obelix, who, because he fell into the druid’s cauldron of the potion as a baby, has permanent superhuman strength (because of this, Getafix steadily refuses to allow Obelix to drink the potion, as doing so would have a dangerous and unpredictable result).

Obelix is usually accompanied by Dogmatix, his little dog. (Except for Asterix and Obelix, the names of the characters change with the language. For example, Obelix’s dog’s name is “Dogmatix” in English, but “Idéfix” in the original French edition.)Asterix and Obelix (and sometimes other members of the village) go on various adventures both within the village and in faraway lands.

Places visited in the series include parts of Gaul (Lutetia, Corsica, etc.), neighboring nations (Belgium, Spain, Britain, Germany, etc.), and far away lands (North America, Middle East, India, etc.).The series employs science-fiction and fantasy elements in the more recent books; for instance, the use of extraterrestrials in Asterix and the Falling Sky and the city of Atlantis in Asterix and Obelix All at Sea.

The humor encountered in the Asterix comics often centers around puns, caricatures, and tongue-in-cheek stereotypes of contemporary European nations and French regions. Much of the humor in the initial Asterix books was French-specific, which delayed the translation of the books into other languages for fear of losing the jokes and the spirit of the story.

Some translations have actually added local humor: In the Italian translation, the Roman legionaries are made to speak in 20th-century Roman dialect, and Obelix’s famous Ils sont fous ces romains (“These Romans are crazy”) is translated properly as Sono pazzi questi romani, humorously alluding to the Roman abbreviation SPQR. In another example: Hiccups are written onomatopoeically in French as hips, but in English as “hic”, allowing Roman legionaries in more than one of the English translations to decline their hiccups absurdly in Latin (hic, haec, hoc). The newer albums share more universal humor, both written and visual. 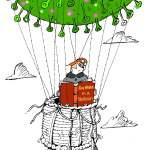 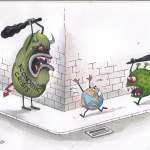