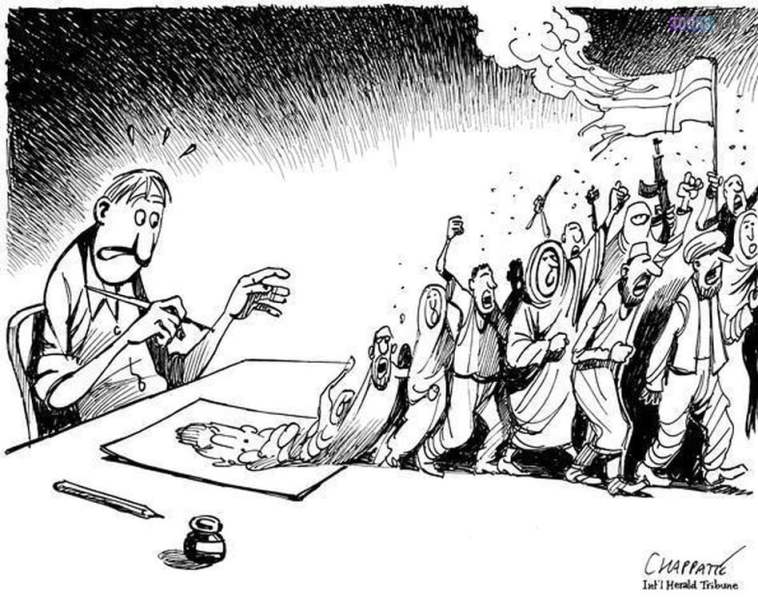 Patrick Chappatte made this drawing for the International Herald Tribune back in 2006, following a controversy over Danish cartoons that mocked the Prophet Muhammad.

Danish Cartoons: Founder Drawn With Same Pen As Followers: Where will it end? All of Denmark, including Danes around the world, are paying for the unflattering depictions of Muhammad in political cartoons of a Danish newspaper. Islam historically has regarded it as sacrilegious to portray the Prophet pictorially, even in a favorable light. I first became aware of this scruple when I used the movie, “The Message” (1976) to introduce Islam in my university world religions class.

This little-known cinematic biography of Muhammad starred Anthony Quinn, not as the Prophet, but as his uncle ‘Hamza, the powerful clan leader. Muhammad never appears on camera- a definite challenge for a biopic! Sometimes people in the film report what the Prophet just told them as they emerge from his tent or cave, and other times, characters speak to the camera as if the camera itself represents Muhammad.

Here’s a background sketchAlthough the Quran nowhere prohibits pictorial representations of Muhammad, it does say that God is like nothing else (Surah 42:11), which has been interpreted to prohibit any attempt to create an image of God, and this is extended to apply also to Muhammad. See also Abraham’s rebuke of idolaters, which included his father (Surah 21:52-54).In a tradition similar to the “No graven images” of the Second Commandment (Exodus 20:4-5; Deuteronomy 5:8-10), much of Islam has avoided pictorial representations of God, Muhammad, his companions, and all of the significant Jewish and Christian prophets. Shiite Islamic tradition, however, has been less strict regarding this ban, and depictions of Muhammad have survived, mainly from 7th-century Persia. Why the uproar?

Now some Muslims across the world are in an uproar, making Danes pay–nearly all of whom had nothing to do with the cartoons in question. Not only is Muhammad being represented pictorially, but one cartoon depicts the Prophet as having a bomb for a turban, essentially equating Muhammad and Islam with terrorism. Also, a photograph of a man Arab wearing a pig’s nose and ears has been misrepresented as among the images published in the Danish newspaper. In actuality, it was a Frenchman named Jacques Barrot in a pig-squealing contest-unrelated to Islam or the Danish cartoons. Unfortunately, the Danish publishers were either unaware of Islamic tradition prohibiting representations of the Prophet, or if they were aware, published them anyway.

They might have anticipated the firestorm they might ignite and decided to avoid the controversy. The latest development is a purported $1 million bounty for murdering any of the Danish cartoonists. Certainly, moderate Muslims and all non-Muslims decry such an outrage. Depictions of Christ As a Christian, I cannot help but feel a pang at the unfairness of our world. If Muhammad is pictured at all, even favorably, people are up in arms, and some non-Muslims rise to their defense. Yet Jesus Christ can be portrayed in ways that mock Him, ridicule, even besmirch Him with lewdness, implicit or explicit. Christians, however, are expected to remain silent as if nothing is wrong.

The Prince of Peace has been portrayed as a warmonger. The Holy One of Israel is depicted as a fornicator or an openly promiscuous homosexual, and no one bats an eye! He humbled HimselfYet Jesus Himself accepted the role of humiliation, of associating Himself with tax-collectors and prostitutes. He challenged His followers to lay down the weapons they would take up in His defense and instead pay attention to a different, more significant way He is depicted in the world–in the lives of His followers. Paul said, “For me to live is Christ….” (Philippians 1:21). He also said, “Imitate me as I imitate Christ” (1 Corinthians 11:1). He says we have put on Christ (Galatians 3:27), and we wear Him daily (Romans 13:14). What do you depict?

The message of the cartoons is clear: When people see Muhammad’s followers act in a certain way, they associate those actions with the Prophet. Jesus himself anticipated that His followers would be persecuted because of animosity toward Him (see Matthew 10:24; John 15:20-21), but it also works the other way. Just as disobedient Jews brought reproach to the name of God (Ezekiel 36:22; Romans 2:24), so His followers can give Him a bad name among unbelievers (see 1 Timothy 3:7; 5:7). When someone opens the newspaper of your life and sees there an image of Christ in your heart, how close is the resemblance to the Son of Man? Does your sin or hypocrisy distort His image until it becomes a comical caricature or a diabolically twisted distortion? Does it bother you that He is so tragically misrepresented? 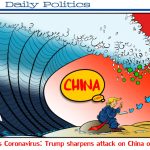 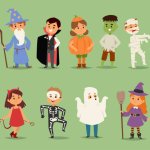