Dave Granlund, A political cartoonist from the US

Dave Granlund cartoons have been published in daily newspapers since 1977 and in weekly papers since the 6Os. Fresh out of the Air Force in 1977, Dave was hired as a political cartoonist for The South Middlesex News in Framingham, MA. Dave was soon syndicated in 1978 by NEA-United Media, published in over 700 newspapers nationally, and later internationally through politicalcartoons.com.

His work has appeared in the likes of the New York Times, USA Today, Chicago Tribune, The Week, Politico, Christian Science Monitor, GateHouse Media, Cape Cod Times, Newsday, and magazines such as Newsweek. Also shown nationally on FoxNews.com, MSNBC.com, HBO, PBS, NPR, ABC News, CNN and NBC’s Today Show. Some of Dave’s sports cartoons are in the Baseball Hall of Fame and Basketball Hall of Fame.

Born in Ware, Massachusetts, Granlund began drawing cartoons for his school newspaper and at the age of 16, he was published on the editorial pages of the Ware River News. While attending college he drew editorial cartoons for the Greenfield Recorder. Granlund’s 8-year enlistment in the US Air Force was with the Strategic Air Command and Headquarters Command. Some of his assignments were connected with the White House and in support of Air Force One. Overseas, as part of NATO in Operation Looking Glass, he was awarded the Joint Service Commendation Medal.

Read also: How to become a cartoonist? 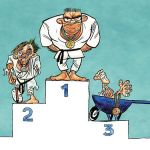 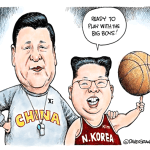