Guy Badeaux, known under the pseudonym Bado, is a cartoonist Quebec, cartoonist, writer and illustrator of comics, born May 21, 1949 in Montreal, Quebec (Canada).

Bado is the pen name of Guy Badeaux (born 21 May 1949), who has been the editorial cartoonist at the French-language daily Le Droit in Ottawa, Ontario, Canada since 1981. Recipient of the National Newspaper Award for editorial cartooning in 1991, he is currently treasurer of the Association of Canadian Editorial Cartoonists. He was editor, for 23 years, of Portfolio: The Year’s Best Canadian Editorial Cartoons, published by McArthur & Company Publishing, and, for two years, edited by Warren Clements, then with The Globe and Mail.

He is best known for his editorial cartoons, which he signs under the pseudonym Bado, in the daily Le Droit en Outaouais. He studied at L’École des Arts Appliqués after which he studied in Europe for a year. He freelanced as a cartoonist and caricaturist and tried his hand at animation and comic strips.

His work appeared in Minimise, Balance, and others. In 1972, he joined The Gazette after which he moved to Le Devoir then worked as a sports cartoonist at La Presse. In 1977 he was editorial cartoonist for the weekly La Jour Hebo until it ceased publication. He was one of the founders of Ludcom Inc. and Croc magazine where he developed the cartoon characters “Les Gages”.

He moved to Ottawa in 1981 and became an editorial page cartoonist for La Droit, a position he still holds. He won the National Newspaper Award for editorial cartooning in 1991. He was the editor of Portfolio: The Year’s Best Canadian Editorial Cartoons from its inception in 1985 to 2005. He was the Treasurer of the Association of Canadian Editorial Cartoonists as well as his newspaper’s union. He relaxes by playing blues harmonica at parties. He is married to Sylvie-Hélène Lapointe and stepfather to her daughters Laure and Gabrielle.

In January 2015, the attack on the Charlie Hebdo newspaper team shook the world. Guy Badeaux, aka Bado, knew the designer Bernard Verlhac (Tignous), one of the victims of this terrible incident. In Who, beasts and wicked? Bado deals primarily with this slaughter and the events of November 13, but also takes a look ironic on several topics that have marked recent events, such as slimming diet in Quebec, the end of the Harper regime in Ottawa and some news that has made headlines in our southern neighbors.

This collection is the third of Bado published by Editions David and its eleventh publication, after Without drawings of the prophet (January 2011) and You are on fire! (February 2014). 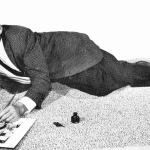