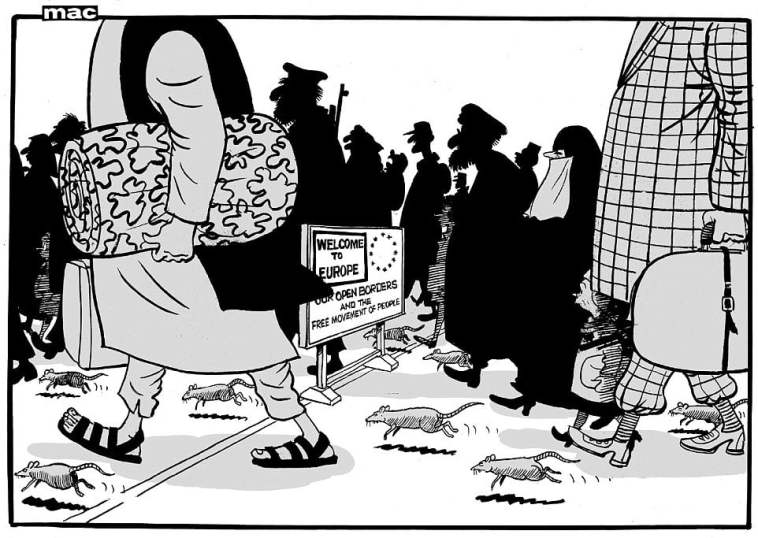 Satire went Wrong; Cartoons are one of the strongest ways to state an opinion and even ignite a revolt, for through cartoons a message can be expressed in a much visually captivating way than what can be done through words alone. Therefore, in times of various significant events in the history of human civilizations, cartoons have been used as a way of protesting and bringing in the desired change in the system. Cartoons are used to offend undesirable actions, make fun of different entities- humans & institutions alike. Cartoons speak too many words without spelling even a single one. Through cartoons, a lot can be said & understood about the subject drawn as well as the person who drew it.

But satire & sarcasm are two too sensitive features to be expressed through any form of art, for done wrong, these two can wreak havoc on the creator.

This very havoc has been wreaked on Mac- the renowned cartoonist of the Daily Mail. Recently, the artist has produced one satiric piece showing rats entering into a new country along with humans as refugees. This satire has many wrong elements in it from the point of view of an audience or a critic. Again, there is also the scope of the argument regarding whether this type of satire or any form of the cartoon should be censored or not. The situation brought a lot of negative PR for the platform as well as the artist, which is not really harmful to ‘no PR is bad PR’; however, though at one point views on the site have been multiplied too many times, it does lose the support & trust of general people over time. In his drawing, Mac showed that a huge number of rats are getting inside the European border with an equally huge number of people i.e. refugees. Now, at the first observation, anybody would think like a certain undesirable entity in the form of an undesirable animal is entering a safe territory, for rats are never welcomed on any media as something positive. The association here has been made between vulnerable humans who are victims of the situation and an undesirable entity. This puts a terrible question on the perspective of the artist- is he trying to say that those who had to leave their own home and search for a safe shelter are undesirable? Hope not.

Again, rats here also stand for disease and terrorism. It can be easily depicted from a deeper point of view from this piece of drawing that Mac was simply trying to say that along with helpless humans in actual need of help, terrorists are also entering the ‘safe’ territory and it’s nothing less than the process of how rats get into our houses. But it’s only a view, an assumption. There are no specific statistics that says a certain number of terrorist entered during the entry of a particular refugee group into a safe country. So this deeper perspective is not really as strong as the other one. Therefore, putting rats at the same level of helpless humans has made the artist’s work really murky.

Before moving forward into the discussion, it is important to mention here that- it’s always appreciated as a cartoonist’s job to offend or criticize or mock an outrage, create chaos and raise awareness among the mass people through their works. In fact, it’s deemed as a responsibility of the satirists and cartoonists. The point here is that Mac hasn’t done anything wrong; however, his way of choosing to present his perspective was wrong. He chose the wrong group of people to target here. And that’s where satire went wrong. When you as an artist target the wrong i.e. helpless, needy, poor, homeless people to be on the receiving side of your sarcasm, it’s no more satire, it’s bullying. And, bullying is never appreciated as a positive effort. Another thing that makes this cartoon such big an issue in terms of humanity and point of sensitivity towards the homeless in desperate need of a home is that- this is not the first time rats are used to dehumanize the victims and humiliate humanity. The Nazis too used rats to represent the Jews. And, Mac’s cartoon is also very easy to be seen as siding with the absolute ban declared by Marine Le Pen regarding accepting refugees to France from the Middle East. This is where Mac failed his duties as a cartoonist; instead of standing with the victims i.e. the refugees, his stand has been on the side of the system.

Now, there’s another side of this discussion. Is it at all allowed to censor what an artist wishes to produce? Doesn’t that mean a barrier to ‘freedom of speech’? And, how far is ‘freedom of speech’ allowed to go? How much should be, if at all, censored in the creative works of an artist? Also, the amount of punishment an artist is to be received in case of violating a certain rule must also be taken into consideration while discussing such an issue.

In recent times, cartoonists around the world have had received various types of punishment for showing their creativity that humiliated the government or any other influential entity. Most of the times those punishments have been few years in jail; although, a creative satirist at heart fears the lack of laughter from the audience to be the worst punishment for doing bad work. Malaysian cartoonist Zunar faced a trial that ended up in long term jail for criticizing his country’s government and he refused to take refuge in other countries which actually offered him help. In Iran, Atena Farghadani is serving 12 years in prison. The militia supporting Assad broke the hands of Syrian cartoonist Ali Farzat in 2011. And, everybody knows how the artists working for the French magazine Charlie Hebdo were murdered.

Well, although nobody is saying Mac is in a position to receive any such punishment for his work as it doesn’t criticize any influential entity; however, it surely did receive the worst punishment a cartoonist can think of and that is to be hated by the mass people, the primary audience of his works. A public apology may end the issue, but the way refugees have been presented in his works will leave a very deep mark on the minds of those helpless victims. 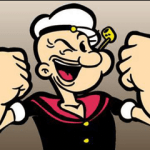 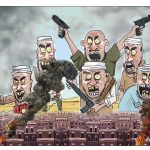